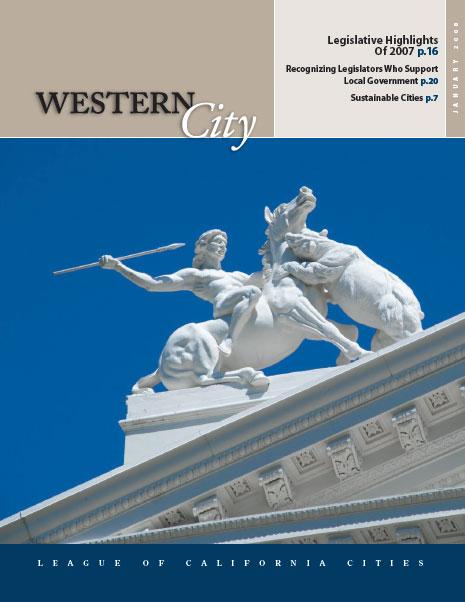 Richard “Bud” Carpenter: A Man for All Seasons

In 2007, the League awarded Assembly Member Anna Caballero (D-28, Salinas) its “Legislator of the Year” award, in appreciation of her support for local government on a variety of issues throughout the legislative session.

Article January 1, 2008 News from the Institute for the Local Government Daniel K. Whitehurst

Daniel K. Whitehurst is incoming president of the Institute for Local Government. He is a former mayor of Fresno and past president of the League’s Mayors and Council Members Department. He can be reached at dan@danwhitehurst.com.

People don’t want their public officials to be “leaders.” Marty Linsky, a faculty member at the John F. Kennedy School of Government, Harvard University, makes this point, and I think he’s right. Voters say they want strong leadership, but what many really want is the opposite: someone who will protect them from having to change their minds or their ways. And they often get their wish; there is no shortage of candidates who run for public office not to lead, but to be popular or important.

Preparing For a Warmer World

Global warming has the potential to threaten California’s economy, environment, communities and residents in many different ways. This article presents an overview of these impacts.

Proposition 90, the eminent domain reform initiative on the November 2006 ballot, was a Trojan horse measure that included provisions unrelated to eminent domain. Prop. 90 would have cost California taxpayers billions of dollars annually and would have eroded basic laws protecting the state’s economy, environment and communities. The measure would have also undermined cities’ land use authority and local control. It was part of an effort to capitalize on public outrage over the U.S. Supreme Court’s decision in Kelov. City of New London, which affirmed its previous ruling that government can use eminent domain to acquire private property for economic development purposes.

Legislators Who Supported Local Government in 2007

The League’s lobbying strength relies on cultivating and maintaining effective relationships with legislators, both in Sacramento and at the local level. When legislators take extra steps to help California cities, they deserve our recognition and thanks. Assembly Member Anna Caballero (D-28, Salinas) was honored by the League as “Legislator of the Year” in September 2007.

Highlights of the 2007 Legislative Year

Dan Carrigg is legislative director for the League and can be reached at carriggd@cacities.org.

In his 2007 State of the State address, Governor Schwarzenegger called for an era of “post-partisanship.” Recently reelected, the governor was eager to build upon the legislative achievements of 2006, which included voters’ approval of the state infrastructure package, the enactment of AB 32 (Nuñez) climate change legislation, the increase of the minimum wage and other accomplishments. The governor maintained that 2006 proved politicians could set aside their differences and tackle California’s problems.

Walnut Creek Mobilizes the Community for Health and Wellness

Chino Shapes Up With a Healthy Coalition

The Origins of California City Powers

This column offers a brief and very general historical look at California cities’ constitutional history and powers. This information sheds light on some of the struggles cities face in protecting local control in the courts and the Legislature.