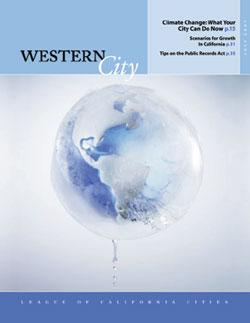 A Warrior for Local Democracy: How One Man Rocked the League

It seems everyone’s talking about greenhouse gas emissions and global warming. In California, public officials are taking a hard look at the fact that electricity generation is one of the biggest offenders; it’s one of the largest emitters of greenhouse gases in the state.

Article July 1, 2007 News from the Institute for the Local Government

Annette Puskarich is recycling coordinator for the City of Palo Alto Public Works Department and can be reached at annette.puskarich@cityofpaloalto.org.

As a nation, we’re generating a lot of waste. According to the U.S. Environmental Protection Agency (EPA), materials discarded from building-related activities, known as construction and demolition (C&D) debris, account for one-third of the total waste generated in the United States.

As energy costs rise and widespread concern about climate change increases, cities can limit their greenhouse gas emissions and save money by reducing energy use in municipal buildings and investing in energy efficiency. This article explores questions city officials should ask about energy use and efficiency so they can make informed decisions about city buildings.

Linda Adams is the State of California’s secretary for environmental protection.

California has a long history of environmental leadership. When Gov. Schwarzenegger asked me to head the California Environmental Protection Agency (CalEPA), he told me, “I want clean air, clean water and no excuses.”

The City of Irvine won an Award of Excellence in the Planning and Environmental Quality category of the 2006 Helen Putnam Award for Excellence program. For more information, visit www.cacities.org/helenputnam.

The City of Glendale won an Award of Excellence in the Planning and Environmental Quality category of the 2006 Helen Putnam Award for Excellence program. For more information, visit www.cacities.org/helenputnam.

Craig Labadie is city attorney for Concord and president of the League’s City Attorneys Department. He can be reached at clabadie@ci.concord.ca.us. Labadie gratefully acknowledges the assistance provided by Kourtney Burdick, the League’s deputy general counsel, in drafting this article.

The purpose of the Public Records Act (PRA) is to give the public access to information that enables them to monitor the functioning of their government.1 Its fundamental precept is that governmental records shall be disclosed to the public, upon request, unless there is a specific reason not to do so.2 Most of the reasons for withholding a record are set forth in the PRA.

Examining Options for Growth in California

The California story is about growth. Since the Gold Rush, people have come to California from every corner of the earth, seeking wealth and opportunity, fleeing long winters and harsh governments, and looking for the chance to build a new life. The population has doubled, redoubled and doubled again. Looking ahead, demographers at the state Department of Finance project that our population will continue to grow from 37 million today to more than 50 million by 2040.

Hans Johnson Ph.D. is a demographer and research fellow at the Public Policy Institute of California. He is the author of numerous reports on the state’s changing population, all of which are available at www.ppic.org.

Any number of superlatives could be used to describe California’s astounding growth. The state’s population, which has doubled since 1965, consists of more than 37 million people today. That growth sets California apart from the rest of the developed world. During the 20th century, California grew at a faster rate than any other large developed region on earth. The state’s population now exceeds that of all but 32 countries. To put it another way, California’s population is larger by several million than all of Canada’s, and within the next 10 years it is likely to surpass that of Spain.