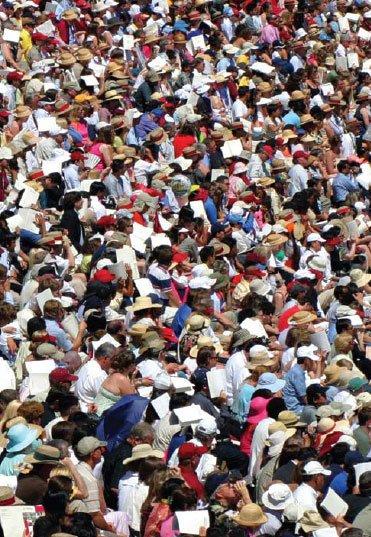 City officials have just two months left to educate residents about the importance of participating in the 2010 U.S. Census on April 1. Our cities and counties risk losing between $3 billion and $5 billion in federal funding if our residents are undercounted in the census. Just as alarming, California could lose a congressional seat for the first time in its 160-year history.

What You Need to Know

An estimated undercount of 2.7 percent of California residents in the 1990 census translated into a loss of $20 billion over the following decade.

For the 2000 census, the Legislature appropriated nearly $25 million for a statewide census organizing campaign to reach hard-to-count (HTC) communities. The 2000 Californiacensus operation launched a multilingual outreach effort that increased the mail-back response rate to 70 percent, up from 65 percent in 1990. The $25 million investment translated into billions of federal dollars flowing back to the state.

In sharp contrast, the Legislature allocated only $1.7 million for the 2010 California census effort. The California Complete Count Committee, which was created by Gov. Schwarzenegger to implement an outreach strategy to count all Californians in the 2010 census, is effectively being asked to do with $1.7 million what took almost $25 million to do 10 years ago. However, major foundations in California are funding a program to help reach the HTC (for more information, visit www.gcir.org/about/what/ciii/census).

Although California is home to 12 percent of the nation’s total population, nearly 22 percent of the nation’s HTC people live here. Many experts anticipate that it will be harder to get traditionally HTC populations to mail back the government form this year, in part because fear of government has grown due to the aftermath of 9/11 and increased U.S. Immigration and Customs Enforcement raids on immigrants. Furthermore, economic displacement associated with the recession causes many poorer populations to move frequently, sometimes doubling or tripling up in a single dwelling. Fearful of being reported to their landlord, they may choose not to count the extra people living in the home. In addition, more than 100 languages are spoken in California, and census forms are not sent out in all of them.

HTC populations are more likely to mail back their census questionnaire when people from their community, who act as trusted messengers, legitimize the census to them and dispel the fear surrounding the government form.

Here are 10 things you can do to help ensure a complete count in your city.

1. Identify where the HTC populations live in your city. Resources to help local officials with this task are available at www.healthycityca.org. Use this information to help shape your outreach efforts.

2. Work with community-based organizations and faith-based groups to identify trusted individuals who can carry key messages to HTC people. Find members of each HTC group who can act as messengers to help spread the word about why participating in the census is important to the community.

3. Take advantage of resources designed to support a complete count. Websites that offer customized tools for cities and links to additional resources include the Institute for Local Government (www.ca-ilg.org/census), the U.S. Census (http://2010.census.gov/partners/materials/inlanguage.php), and California Complete Count (www.californiacompletecount.org).

4. Educate your community’s trusted messengers about the census process. Information about frequently asked questions related to the census is available at www.californiacompletecount.org/2010_census_explained/faqs.

5. Piggyback outreach efforts with cultural and community events that are planned for HTC groups locally. Use these ready-made opportunities to reach HTC target populations in a friendly environment.

6. Develop culturally appropriate messages. This may be the most difficult challenge associated with the census. For example, in the traditionally undercounted Asian-Pacific Islander population, there are many subgroups and languages. One size does not fit all. Work with community-based organizations and faith communities to craft messages that each HTC group will readily understand.

7. Emphasize that the information gathered by the census is confidential. For HTC groups who distrust government in general, it’s extremely important to explain that there is no risk associated with participating in the census and census information is not shared with other agencies or used for other purposes, such as checking immigration status. By law, the U.S. Census Bureau cannot share an individual’s answers with anyone, including welfare and immigration agencies, and census workers take an oath to protect the confidentiality of census responses.

9. Work with the business community to reach workers. Use existing networks, such as the local chamber of commerce, to educate employers who can in turn encourage their employees to participate in the census.

10. Offer practical examples of the ways that a complete count supports vital community services and facilities. Funding for important education and health programs is based on average income, so it’s critically important to count the less affluent and HTC populations. Census data are used to determine funding that includes community development block grants and social services. Census information is also taken into account when making decisions about the locations of schools, roads, hospitals, child care and senior centers, and other essential infrastructure.

Time is running short to mobilize your community. If you haven’t already started, don’t wait another minute: Working to secure a complete count will benefit every Californian in every community throughout our state for the next 10 years.