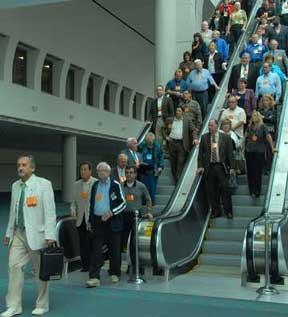 Special thanks to Scott Summerfield, principal of SAE Communications, who covered the annual conference for Western City magazine. He can be reached at ssummerfield@saecommunications.com.

More than 1,500 city officials attended the League of California Cities 2010 Annual Conference and Exposition held Sept. 15-17, 2010, in San Diego. Numerous sessions and workshops focused on issues of current concern to cities statewide, and attendees took advantage of many opportunities to share solutions to common challenges. Attendees also toured the Expo, where more than 200 companies showcased products and services designed to help cities increase efficiency and save money. On Friday, Sept. 17, city officials gathered at the League’s Annual Business Session to vote on proposed changes and additions to League policy, and the new 2010-11 board of directors took office. The following items highlight just a few of the many speakers and presentations that made the conference a success.

National League of Cities (NLC) President and Riverside Mayor Ron Loveridge offered an assessment of the role of state and federal government in municipal economic recovery during his keynote address at the League’s annual conference on Thursday, Sept. 16, 2010.

Cities’ agendas, which include issues such as jobs, transportation, infrastructure investment, energy independence and more, represent the central issues of our time, according to Loveridge. “Too many California cities are markers of high unemployment and low revenues, and the economic recovery of cities is closely related to the recovery of this country,” he said.

NLC estimates that cities face a shortfall of up to $83 billion over the next two years, and nearly half a million public sector employees will lose their jobs. Loveridge emphasized that cities cannot look to the states for much help. “States face uncertain revenues and futures for many years,” said Loveridge. “They aren’t likely to be policy laboratories or success stories for our nation’s economic recovery. As Proposition 22 emphasizes, Sacramento too often takes our money to balance its own budget.”

Where do cities go for help if the state picture is bleak? Loveridge told city officials that local leaders must move the agenda of cities in Washington, D.C., teaming with political, private and nonprofit allies. “Together we can move the city agenda in Washington from one of special pleading to one of the public interest. We need to establish a compelling narrative of the importance of what happens in cities,” he said.

Connecting the NLC more closely with local organizations is one of Loveridge’s top priorities. He noted that as the nearly 50,000 members of state leagues champion their interests, there is a potential partner in Washington. “The Obama administration has shown an interest in the good city, and a willingness to listen to mayors and council members from across the country,” Loveridge added. “But we’re almost halfway through the Obama term, and historically it is in the early years that major legislative efforts are likely to pass.”

The proposed Local Jobs for America Act is a major step toward helping cities meet demands for critical services, providing $75 billion in direct aid to local government over a two-year period. “But quite simply, it doesn’t have the support necessary to pass in this session of Congress,” Loveridge observed.

Although back-breaking work looms ahead for cities as they struggle to recover from unprecedented budget turmoil, Loveridge remains optimistic. “I strongly believe in cities and their promise for the good life,” he concluded.

Flexibility Is Key to Coping With Financial Woes

Local government budgets have taken huge hits, and the atmosphere around city halls these days isn’t exactly filled with mirth and merriment. But municipal life goes on, and cities must recognize that development agreements, public-private partnerships and even General Plans can still succeed in spite of current woes.

Katherine Aguilar Perez, executive director of the Urban Land Institute in Los Angeles, noted at a panel on Sept. 17 that developers have struggled mightily in the past year to move projects forward. Cities have an opportunity — and responsibility — to keep these projects on the table if they are critical to the community’s future. “You can negotiate, but you need to know what developers require to make a project work,” Perez cautioned. “Cities get wedded to a project, and those that are transformative or catalytic are difficult to change. Open communication with development partners and with the community is essential. But don’t expect the developer to carry the weight for communications with the community. That’s the city’s responsibility.”

“We went with hat in hand to developers and renegotiated agreements to keep projects going,” Morgan shared. “We also took a breath during this development lull and invested in a new downtown community plan. This positions us for the future when the economy does pick up.”

Along with the effort to be flexible with developers and the downtown plan update, Long Beach is investing heavily in infrastructure to support new projects. “With 40 percent savings in construction costs, we’re doing infrastructure improvements where we can get the most bang for our buck,” Morgan added.

Long Beach is also preparing for a development comeback by attracting residents downtown to support existing stores and restaurants and showcase its numerous amenities. The city has held free concerts and other special events that, by Morgan’s estimation, have returned almost $4 for every dollar spent.

The life of a project in the current environment can be lengthy and frustrating but ultimately fruitful if cities exercise patience and flexibility. For example, a project in Pasadena began as a retail center, then was changed to a hotel to reflect a dismal retail leasing market, suffered from an overseas debt crisis, was transformed again to an office project, then affected by the dot.com bust and ultimately was built as a mixed-use development. Along the way, a General Plan amendment was required, and elected officials needed to become comfortable with the idea of mixed use on a major thoroughfare, but persistence and patience paid off.

Panel moderator Silvia Saucedo of the Saucedo Group emphasized the need to build flexibility into development agreements, particularly in an unpredictable economy. “If something happens, you have options for modifying the project,” Saucedo noted.

The Time May Be Right for a City Cultural Remodel

Budget chaos may reign in local government today, but cities have a rare opportunity to examine every aspect of municipal operations, make tough choices to survive tough times and prepare for what may be a radically different future.

Rancho Cucamonga Mayor Pro Tem Dennis Michael shared his city’s formula for success in a panel discussion on Sept. 17, 2010, at the League’s annual conference. Coping with a revenue loss of 14 percent over the past two years, Rancho Cucamonga reacted thoughtfully as it braced for an extended downturn by:

Michael also cautions that the city council bears responsibility for a cultural remodel and recommended:

The results of Rancho Cucamonga’s efforts are already apparent, with the city’s credit rating upgraded to AA (the highest in its history) and no unfunded liabilities. Michael cautioned, however, that the city’s remodeling project will never really be completed. He cited several things that every community leader should keep in mind:

How Going Green Makes and Saves Your City Some Green

We’ve all heard and seen plenty of information about why cities should take a more environmentally friendly approach to operations. But in these fiscally adverse times, there’s a compelling reason to make energy efficiency a priority: It will save and even make money for cities.

A panel discussion held Sept. 16, 2010, at the League’s annual conference focused on the steps cities should consider when they commit to energy efficiency and included case studies of communities that are already walking the green mile. Patrick Stoner, statewide local government energy efficiency coordinator, outlined three basic first steps on that walk:

Chula Vista mayor Cheryl Cox shared highlights from her community’s 20-year transformation into a “cool city.” The effort met with early trepidation, but gained traction as it became apparent that it saved money and was indeed the right thing to do. “Interdepartmental coordination was key to our success,” Cox noted.

So why be green? Cox offered five hard-to-resist reasons for going green. It:

Taking these simple steps produces a healthier bottom line, a cleaner environment and a thoughtful approach to the community’s future. These benefits alone offer communities a strong incentive to start on that green journey.