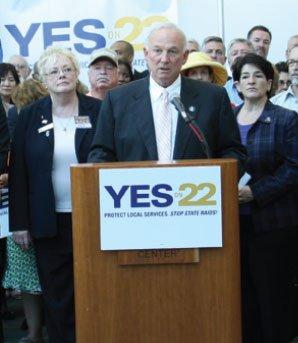 California cities have faced some tremendous challenges in the past year, and the League has worked hard to support our efforts. As I approach the end of my term as League president, I’ve been reflecting on the progress we’ve made. There can be no doubt that the highlight of my term was our overwhelming victory in passing Proposition 22 (with 61 percent support). We must now be prepared to defend it from assault by the Legislature and governor, and your board of directors stands ready to do that.

Each November the League sets strategic goals for the coming year. The 2011 goals are:

The League officers and staff have sought opportunities to partner with state policy-makers and other leadership groups and stakeholders to advance ideas that will reform and revitalize the structure, governance, fiscal integrity and responsiveness of our state government and intergovernmental system. However, these efforts have been overshadowed by the need to respond to the governor’s proposal to eliminate redevelopment agencies, leaving little time to pursue this goal. Nevertheless, progress is being made on what the board agreed is a multi-year undertaking.

Cities-Counties-Schools (CCS) Partnership. League officers participated in a January 2011 meeting of the CCS Partnership, which included discussions with the executive director of California Forward about its reform agenda for 2011–12. California Forward’s mission is “to work with Californians to help create a ‘smart’ government — one that’s small enough to listen, big enough to tackle real problems, smart enough to spend our money wisely in good times and bad, and honest enough to be held accountable for results.” Funded by private foundations, California Forward is focused on robust public discussion and creating broad coalitions that can move solutions forward. As of July 1, operations and staffing of the CCS Partnership are being streamlined through an agreement for staffing services with the Institute for Local Government (the research arm of the League and California State Association of Counties, whose mission is to promote good government at the local level). The CCS Partnership will continue promoting local government collaboration.

The call for public pension reform appears to be gaining in intensity and remains a prominent issue throughout the nation. Cities are experiencing sharply increasing pension costs and, in turn, are being forced to make difficult decisions about cutting back public services in response. The League has laid a significant amount of groundwork on this issue, including the following activities.

Comprehensive Survey of City Pension Reforms. League staff completed the first phase of a survey of city actions at the local government collective bargaining table, and the results are posted on the League website. Nearly 300 cities responded to the survey. The League plans to update this survey at least annually as bargaining results are reported.

City Managers Develop Pension Reform Action Plan Paper. The City Managers Department played a strong leadership role among local governments on the issue of public pension reform. After taking into consideration recent studies, workshops and publications on the issue and conducting internal discussions, the department has developed a Pension Reform Action Plan Paper. The plan contains some strong recommendations to help local governments get a better handle on rising pension costs. The recommendations include actions that can be taken at the local government collective bargaining table and by the state Legislature. The plan has been endorsed by two League policy committees and was recently approved by the League board.

Continued Outreach to Employee Unions and Other Stakeholders. At the League’s Legislative Action Days event in May, a session on public pension reform included a panel discussion. Panelists represented the Peace Officers Research Association of California, the Service Employees International Union (SEIU), the League’s City Managers Department, the Little Hoover Commission and included a consultant from the office of Sen. Mimi Walters (R-Laguna Niguel). The League is engaging labor and other stakeholdersin an ongoing dialogue focused on possible solutions to public employee pension problems.

The League continues to enhance the tools we use to communicate with our members. The organization is planning a complete website overhaul in 2011, leveraging social media to help effectively disseminate our messages and utilizing technology to bridge geographical distances between staff and members. These tools are essential components of the League’s ability to engage its members in efforts to protect local control.

E-Newsletters. In December 2010, the League increased the frequency of its electronic newsletter, City Advocate Weekly, and renamed it CA Cities Advocate.

Social Media. The League uses social media on a daily basis to inform members of legislative and other developments. More than 1,000 people now “like” the League’s Facebook page (www.facebook.com/LeagueofCaCities), and the legislative Twitter page, @CaCities, has more than 500 “followers.” The League’s education programming updates are sent to Twitter followers via @CaCitiesLearn.

Social media has also played a major role in the campaign to protect redevelopment. Messages and videos are posted on the League’s Facebook and Twitter accounts in conjunction with efforts on www.ProtectOurLocalEconomy.com and “Stop the State’s Redevelopment Proposal” on Facebook.

Distance Learning. An increasing number of educational programs are being offered online as webinars, including the Legislative Briefings. The City Attorneys Department offered a Prop. 26 Update webinar in April, and nearly 100 listening sites participated in the program, which offered MCLE credits.

Work is under way to completely overhaul the League website at www.cacities.org in 2011. The request for proposals was sent to potential vendors in early May. Staff anticipates rolling out a new website by the end of the year. The new League website will make it possible to provide much more training and educational content, reducing the need for city officials to travel to meetings.

As the end of my term as League president draws near, I want to thank the League board of directors, Executive Director Chris McKenzie, League staff and all of the city officials who have worked so diligently on these issues. We have made significant progress during a year filled with obstacles and difficulties, and that progress is a result of the combined energy, talents and determination of our members and staff. I encourage you to redouble your efforts. Join us at the League of California Cities 2011 Annual Conference & Expo next month to learn about the latest developments that affect our cities and how we can work together to overcome the challenges that face us. I look forward to seeing you there.