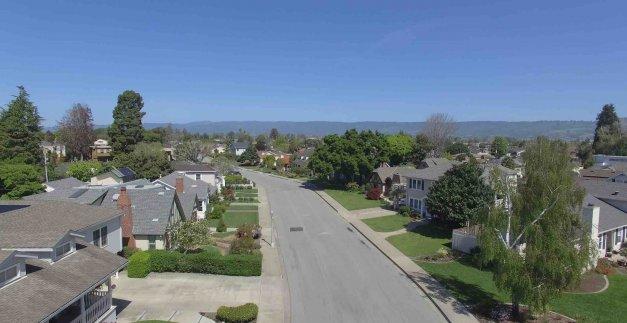 Karalee Browne is sustainability program manager for the Institute for Local Government and can be reached at kbrowne@ca-ilg.org.

California local governments have spent millions of dollars developing energy and climate action plans. To date, over 200 local governments in California have adopted climate action plans, but now many are scrambling to find ways to fund implementation. The state’s cap-and-trade climate investment program offers a glimmer of hope, but with proceeds from the past several carbon emission permit auctions lower than expected, many local agencies are developing their own internal, sustainable funding sources to implement energy and climate action activities.

Watsonville Builds Its Own Carbon Fund

The City of Watsonville (pop. 52,891), located in Santa Cruz County, is a densely populated agricultural powerhouse. Surrounded by the lush fields and orchards of the fertile Pajaro Valley, Watsonville serves as the manufacturing and processing hub for farms throughout the region and is home to many agricultural workers. Although the state government identifies Watsonville as a disadvantaged community, the city manager is not bound by that label. “It’s up to us to change that narrative and bring balance to our community,” says Watsonville City Manager Charles Montoya. “We are trying to get more money into our system so we can determine our own future.”

In 2012, Watsonville received a $277,811 grant from the state Strategic Growth Council to develop a comprehensive Climate Action Plan. With this initial investment, the city hired a consultant who helped craft a community-driven plan that guides the city’s environmental initiatives. The consultant also created the structure for the city’s first Carbon Fund, which aims to boost energy efficiency and renewable energy projects and create a sustainable funding source for the city’s climate action initiatives.

Formalized in an ordinance adopted in 2015, Watsonville’s Carbon Fund Program adds a carbon impact fee to all new development as a percentage of the building permit fee. The fees have ranged from $272 to $23,000. Development project applicants can receive a full or partial refund of the fees if they voluntarily reduce 40 to 80 percent or more of the new development’s estimated average annual electricity demand through energy efficiency measures and/or on-site renewable energy, such as solar photovoltaics.

Applicants use a simple form to complete the calculations as part of the permit process. The carbon fees collected are automatically routed to Watsonville’s Carbon Fund, which can be used only to implement greenhouse gas reduction projects in the city. “The city wins either way,” says Suzi Merriam, Watsonville’s acting director of community development. “We incentivize new construction to build more sustainably and reduce greenhouse gas emissions — or we get the money to realize those reductions in other ways.”

The City of Watsonville’s Carbon Fund currently contains approximately $40,000. Staff is considering whether to recommend some smaller projects or allow the fund to grow and ask the council to approve using the money to fund a larger initiative in 2018. 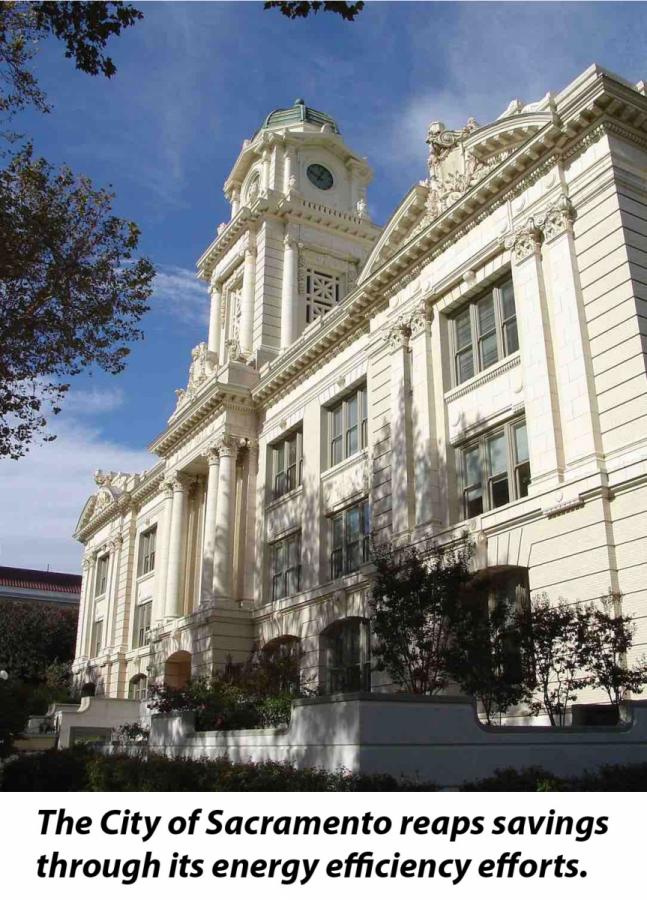 Talk to a Sacramento enthusiast and you are likely to hear about the new downtown arena built for the Sacramento Kings basketball team. Golden 1 Center is the NBA’s first-ever LEED Platinum arena, which provides a highly visible example of the city’s commitment to leadership in climate, energy and sustainability.

Another example of Sacramento’s innovative approach is its creative energy financing program, which used a $1.9 million federal Energy Efficiency and Conservation Block Grant (EECBG) as seed funding. The city created a revolving loan program in 2009 that continues to fund energy efficiency projects in municipal facilities. Sacramento’s former Department of General Services (DGS) conducted an initial energy audit and modeling for all agency facilities, which helped identify and illustrate the savings that can be realized by changing to more efficient systems.

DGS presented the options to various city departments, and five entered agreements to upgrade systems. A standard contract outlines that DGS will provide the loan, project design, implementation and measurement verification for the projects. The departments that chose to implement efficiency are responsible for paying back the loan using the estimated energy savings from the projects, plus a 3 percent interest rate to cover administrative costs. The fund now operates as an ongoing capital improvement project, the Energy Reinvestment Program, and the Department of Public Works manages it.

“This program has been an important step in institutionalizing our commitment to energy efficiency,” says Sustainability Manager Jennifer Venema. “The original funding has come and gone, but we’ve been able to maintain progress by plugging savings and ongoing rebate incentives back into the fund. We’ve then used that money to support staff time so we can keep catalyzing new initiatives.”

The payback is designed to be cost neutral for each department and will reduce the department’s budget after the loan is repaid in full. Through this program, the City of Sacramento estimates its departments will have saved 9.5 million kilowatt hours of electricity annually, which translates to an annual financial savings of $1.2 million. 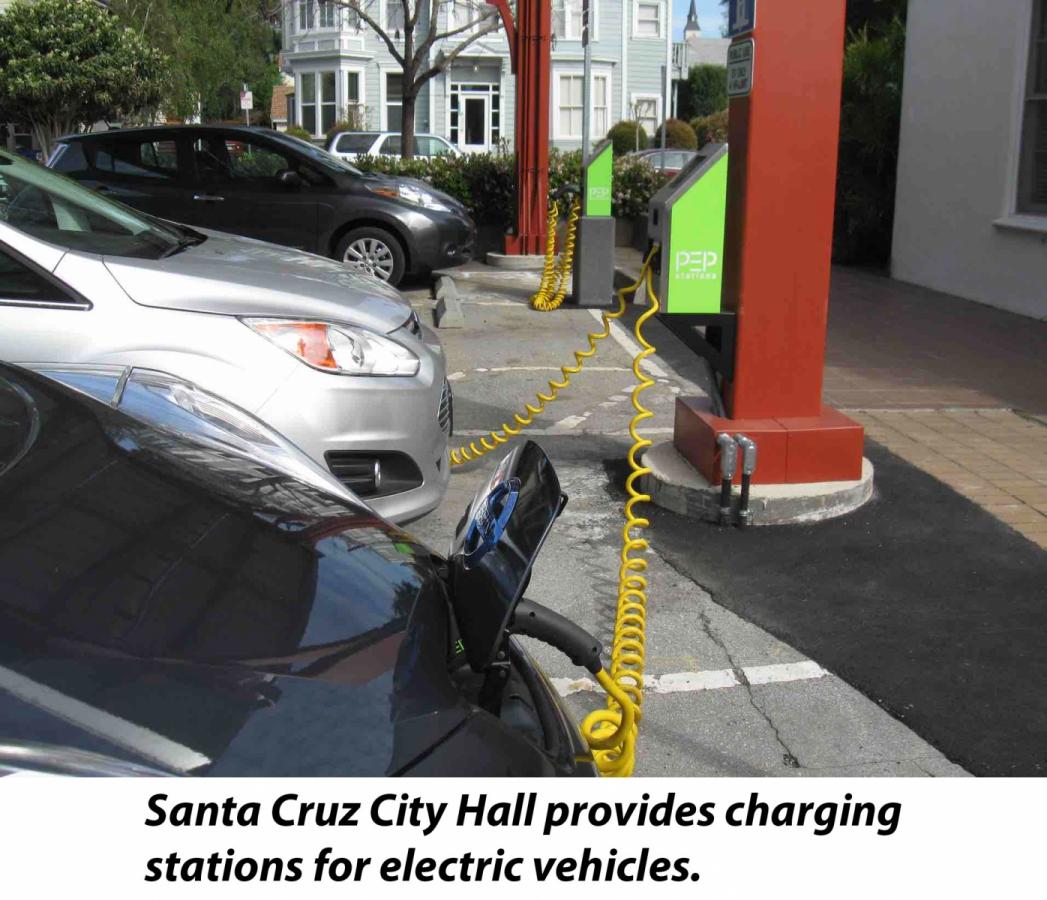 The City of Santa Cruz (pop. 64,632) has long been an environmental leader, winning Spotlight Awards for energy savings, greenhouse gas reductions and sustainability best practices from the Institute for Local Government’s Beacon Program in 2015. The city adopted its Climate Action Plan in 2012 and has set ambitious milestones to measure progress in energy use, transportation, water conservation, waste diversion, urban forestry and green business development. But finding funds to implement specific projects is always a challenge.

With no seed money, Santa Cruz launched its Carbon Fund by capturing energy efficiency and solar rebates from eligible projects that various city departments chose to undertake. Performance-based rebate checks that previously were routed to the General Fund are now directed to a special Carbon Fund, with the funds being used to implement carbon-reducing projects that align with the Climate Action Plan.

Santa Cruz spent almost two years building the political support to get the fund up and running. “Our city leaders and staff saw the value in creating an internal revenue source for reinvesting in carbon reducing projects that implement our Climate Action Plan,” says Tiffany Wise-West, sustainability and climate action coordinator for the city.

The program is designed so that the city spends two-thirds of the accrual in a given year, allowing the remaining one-third to roll into the next budget cycle. Each municipal department can propose projects as long as the projects are consistent with the city’s Climate Action Plan. The city’s sustainability team, which comprises employees from all departments, prioritizes the proposed projects based on preset criteria, and the city manager approves the projects recommended by the sustainability team.

“The program gives us the flexibility and predictability to fund projects that align with our Climate Action Plan and achieve our goals,” says City Manager Martin Bernal. “This structure allows city employees to feel part of the process in helping make our city more environmentally responsible.”

The program netted approximately $70,000 in its first year, but with many energy efficiency projects already implemented and incentive programs like the California Solar Initiative Rebate Program fully subscribed, the city is looking to diversify its funding stream. Santa Cruz is exploring options to implement a fuel surcharge on fuel purchased for city-owned vehicles or establish a revolving loan fund like Sacramento’s that captures a portion of the first year’s savings from energy efficiency projects in the fund. The city is also evaluating more creative financing options, such as producing and monetizing low-carbon fuel standard credits and California-based greenhouse gas credits on the new California Air Pollution Control Officers Association Greenhouse Gas Reduction Exchange.

Whether it is $10,000 or $500,000, carbon funds provide cities the financing and flexibility to implement creative energy-efficiency and carbon-reduction activities without hiring consultants to complete applications or perform the exhaustive documentation associated with many grant programs. When cities can tie carbon fund initiatives to existing processes, such as permitting, the programs require nominal resources from local agencies — and could be the difference between being stuck with a Climate Action Plan that sits on a shelf or one that is implemented at a steady rate.

More than 100 cities statewide have joined the Institute for Local Government’s Beacon Program to affirm their commitment to saving energy and adopting policies and practices that reduce greenhouse gas emissions and promote sustainability. To join the Beacon Program, www.ca-ilg.org/beacon-program. 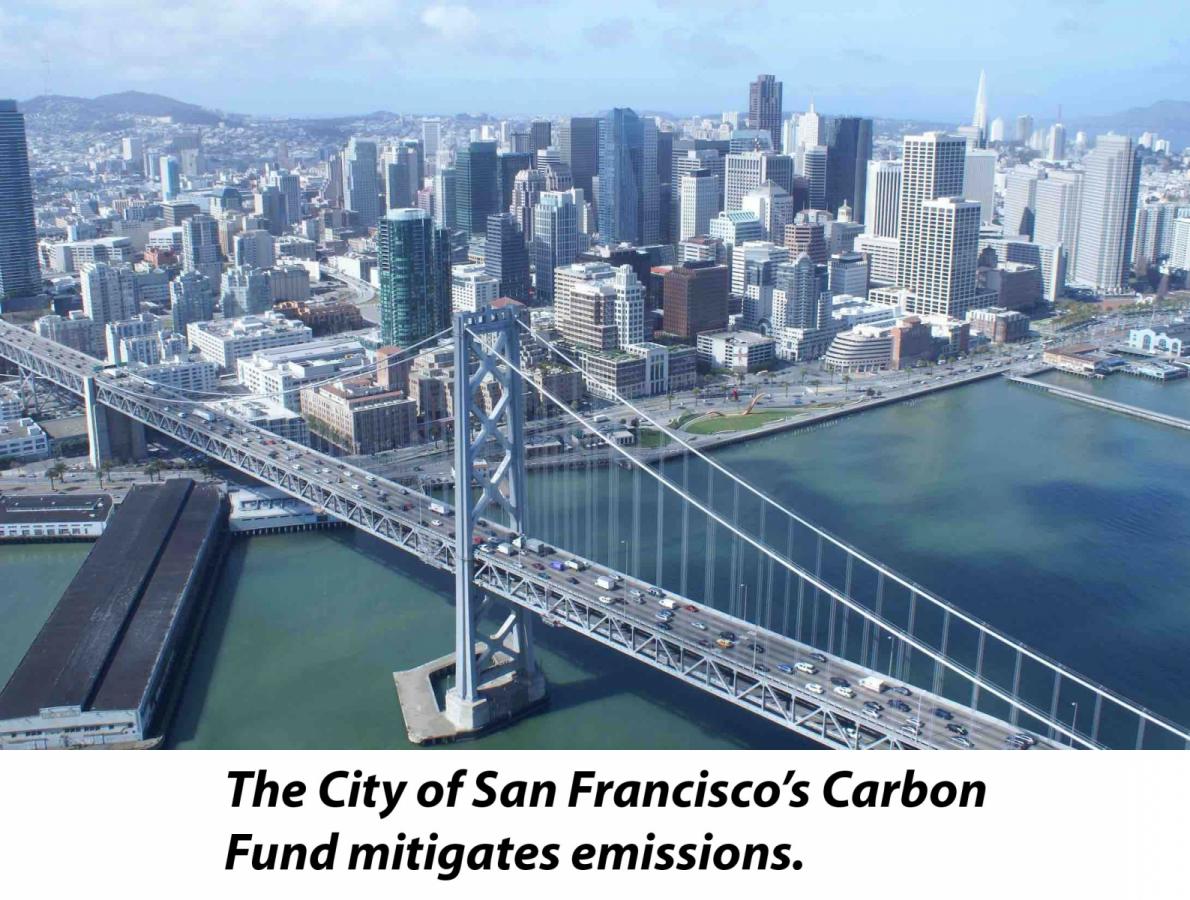 Tourist-rich areas like San Francisco and Monterey Bay offer businesses and residents the opportunity to mitigate event-related greenhouse gas emissions by buying carbon offsets or donating money to a Carbon Fund administered by a local nonprofit. Through a website, an online calculator helps determine the financial equivalent of a particular carbon-intense activity, such as air travel, and allows an individual to donate that amount immediately online. The money collected is used to fund local projects such as solar panel installations or tree planting in the community. These programs can net an average of $500,000 from individual donors and businesses annually.

The San Francisco Carbon Fund is primarily funded through local legislation calling for 13 percent of the cost of municipal employees’ air travel for city business to be invested in local projects that mitigate and sequester travel-related greenhouse gas emissions. In addition, the fund provides an opportunity for events and conferences to mitigate event-related emissions by contributing to these local projects. Launched in 2009, the fund was the first of its kind to invest solely in local projects that reduce emissions close to where they were generated. Though it is not an official offset program, the San Francisco Carbon Fund uses widely accepted protocols to estimate carbon savings and secures approximately $170,000 annually. In addition to the carbon savings, projects provide other benefits, such as building a sense of community, helping small businesses save money through energy efficiency retrofits, providing food to underserved neighborhoods, creating a local source of biodiesel and creating a greener, safer and more walkable city.

For more information about the Monterey Bay Offset Project

For more information about the San Francisco Carbon Fund