Over the past several years, California cities and counties have faced the issue of whether to permit or ban medical marijuana dispensaries that opened throughout the state. Many cities imposed bans or prohibited dispensary operation, while some cities required permits, business licenses and regulations. Local bans on dispensaries were fiercely contested by those supporting the proliferation of storefront retail-style dispensaries. In response many cities, exercising their local land-use authority and police powers, brought nuisance abatement actions to enforce their bans. The decision of the California Supreme Court earlier this year in City of Riverside v. Inland Empire Patients Health and Wellness Center1 (referred to as Inland Empire Patients) affirmed that cities have the authority and the right to ban medical marijuana dispensaries within their boundaries.

In 1996, California voters approved the Compassionate Use Act (CUA), which decriminalized marijuana use for medical purposes. The passage of the Medical Marijuana Program Act (MMP) in 2003 clarified the specifics of implementing the CUA — which include issuing identification cards for qualified patients and allowing patients and their primary caregivers to collectively or cooperatively cultivate medical marijuana.2 Neither law regulates or restricts local zoning requirements for medical marijuana dispensaries. However, the California Supreme Court had never ruled on whether the state laws pre-empted a local ordinance banning medical marijuana dispensaries, leading some to believe that uncertainty remained — even though case law strongly suggested that permanent prohibition was permitted, and federal law continued to categorize marijuana as a controlled substance.3

The City of Riverside’s zoning code:

The city brought an action seeking to close the Inland Empire Patients dispensary, but the defendants asserted that the CUA and the MMP pre-empted the city from enacting and enforcing its complete ban on dispensaries.4

The trial court found no state law pre-emption and granted the city’s request for a preliminary injunction to close the dispensary. The Fourth District Court of Appeal upheld the injunction, and the defendants sought review by the California Supreme Court.

In a significant legal victory for California cities, the Supreme Court unanimously ruled on May 6, 2013, that local governments have the power to ban medical marijuana dispensaries. The court concluded that the CUA and MMP do not “expressly or impliedly pre-empt the authority of California cities and counties, under their traditional land-use and police powers, to allow, restrict, limit, or entirely exclude facilities that distribute medical marijuana, and to enforce such policies by nuisance actions.”5

The court clearly asserted that state medical marijuana laws do not restrict Riverside’s ban or any similar city ban, stating that the scope of the laws is limited and circumscribed: “Nothing in the CUA or the MMP expressly or impliedly limits the inherent authority of a local jurisdiction, by its own ordinances, to regulate the use of its land, including the authority to provide that facilities for the distribution of medical marijuana will not be permitted to operate within its borders.”6

A Win For Cities

At the time of the Inland Empire Patients ruling, approximately 200 California cities had banned medical marijuana dispensaries.7 The ruling upheld those bans and provides the framework for other cities to adopt similar bans should they so choose. 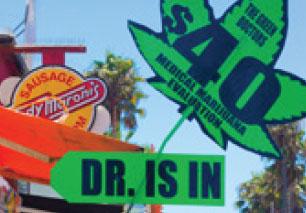 Even though the Supreme Court’s decision in Inland Empire Patients settles the question of whether cities may implement bans on medical marijuana dispensaries, several related issues loom on the horizon, including mobile delivery, future changes in state law, local regulation and the federal government’s role.

Mobile Delivery. The closure of storefront dispensaries may lead to an increase in mobile medical marijuana operations. Operators of mobile delivery services argue that such operations do not fall under city zoning ordinances because mobile operations do not involve the use of land. Mobile dispensaries, however, remain a target or magnet for crime, including shootings and robberies. Many cities have followed Riverside’s lead in also banning mobile dispensary operations. It is our view that a city’s constitutional police powers that authorize dispensary bans also provide the authority for cities to ban mobile operations as a peace, health and safety measure — especially in light of the Inland Empire Patients ruling.

Future Changes in State Law. The Supreme Court also noted in Inland Empire Patients that “nothing prevents future efforts by the Legislature, or by the People, to adopt a different approach.”8 Several legislative efforts in 2013 sought to expressly allow medical marijuana dispensary operation, although no such measures ultimately passed. More legislative proposals are expected next year. Furthermore, new state and local legalization initiatives are anticipated. One proposed 2014 statewide initiative aims to legalize forms of “cannabis hemp products,” specifically those categorized as industrial, medicinal, nutritional and euphoric products. Funding, however, may remain a challenge as it did in 2012 when five proposed initiatives caused fragmentation within the legalization movement that made it difficult to acquire funding.

At the local level, voter initiatives are also expected, given the success of the Measure D initiative that voters adopted in the City of Los Angeles. That local measure imposes a city sales tax on medical marijuana purchases and restricts the number of permitted medical marijuana dispensaries to the original 135 approved in the city before 2007. Voters in the City of Santa Ana will decide in June 2014 whether to remove the city’s ban on dispensaries and instead implement a dispensary registration process, business tax requirements and zoning restrictions. Local initiatives in other cities may follow, allowing some level of permitted dispensary operation.

Local Regulation. Some cities may want to permit and regulate medical marijuana dispensaries within their boundaries. The ability to do so, however, remains an open legal question. The Supreme Court did not expressly address in Inland Empire Patients the extent to which such permitting schemes would be pre-empted by federal law, which prohibits marijuana possession and distribution, or California Government Code Section 37100, which states that cities “may pass ordinances not in conflict with the Constitution and laws of the state or the United States.”

The Role of the Federal Government. In October 2011, the four U.S. attorneys in California introduced stringent enforcement programs against medical marijuana dispensaries. The effort included sending letters to property owners who rent to dispensaries, advising of potential prosecution and asset forfeiture proceedings. The program was successful where it was implemented. Nearly two years later, in August 2013, the U.S. Justice Department issued a memorandum announcing that it would not prioritize marijuana enforcement against businesses that were following state law and adhering to certain criteria. The memorandum makes clear that marijuana remains an illegal drug under federal law and identifies certain enforcement areas that federal prosecutors should prioritize.9 It is too early to assess the implications of the memorandum for medical marijuana dispensaries, and as this article goes to press it is unclear whether it will alter the efforts of the U.S. attorneys in California.10

The Inland Empire Patients case brought by the City of Riverside represents a substantial victory for California cities in 2013. The decision ultimately preserves local land-use control and authority in an important area of law and reaffirms cities’ broad constitutional police powers. However, medical marijuana will continue to be a closely watched issue in California in 2014 as legislative measures, state and local initiatives, mobile operation issues and federal enforcement efforts continue to unfold.

[4] State land use pre-emption occurs when the state law displaces or conflicts with a subordinate local government’s land use regulation. This occurs when the local ordinance (1) duplicates state law; (2) contradicts a state statute that expressly occupies the field; or (3) the state occupies the legislative area by implication. See Sherwin–Williams Co. v. City of Los Angeles (1993) 4 Cal. 4th 893, 897.

[9] These eight factors are as follows:

[10] Northern California U.S. Attorney Melinda Haag has already stated that her actions against medical marijuana dispensaries would continue and, through a spokesperson, stated, “For the most part it appears that the cases that have been brought in this district are already in compliance with the guidelines. Therefore, we do not expect a significant change.” Roberts, Chris. “Melinda Haag: New Marijuana Guidelines Won’t Affect Local Cases.” San Francisco Examiner, Sept. 3, 2013.