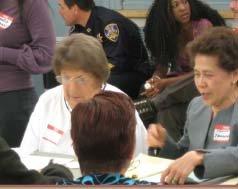 Terry Amsler is program director of the Institute for Local Government’s Public Engagement and Collaborative Governance program and can be reached at tamsler@ca-ilg.org.

Local officials throughout California are finding new and more participatory ways to involve residents in local budgeting processes. Budgeting is always challenging work because there are typically more local needs than resources to fund them, and current economic conditions and California state budget shortfalls make this task even more difficult.

Involving the public in local budgeting decisions offers opportunities to:

A number of cities are exploring new ways to involve the public — and in some cases city employees as well — more directly in budget planning.

Faced with declining revenues from sales and property taxes in 2009, Daly City sought to educate and involve residents through four public forums designed to identify community values and priorities, which would help determine funding levels for city programs and services.

“We want to know what you place the highest value on so we can take that into consideration when preparing the budget,” City Manager Patricia Martel told 50 residents at the first forum.

Daly City also sent residents a special issue of its newsletter, with extensive information on city revenue sources, services and spending as well as a mail-in survey. These materials and an online version posted in multiple languages on the city’s website helped gather informed opinions from those not attending the forums.

The meetings began with a welcome and background information on the city’s financial situation from the city manager, followed by a visual presentation from the city’s finance director. Participants discussed the qualities of a good community and the city services they preferred to be kept at current levels or reduced. Translation services in Spanish, Tagalog and Chinese enabled the city to involve a broad range of residents.

Nearly 300 residents participated in the forums and more than 1,300 surveys were completed. “Residents were comfortable enough to feel free to offer suggestions,” explains City Manager Martel. “It was a little easier for the council to make hard decisions about reducing services since we heard in our public engagement process that people were willing to accept certain trade-offs in order to make sure that their highest priority services and programs would not be affected by the budget reduction.”

Brea city leaders reached out in 2009 to involve staff and residents in the budget process. City Manager Tim O’Donnell asked staff to volunteer to serve on a budget strategic planning committee as a first step in collaboratively crafting a balanced budget. Between 30 and 40 city staff members met twice a week to discuss the budget situation, community priorities and suggested cuts.

The agency also hosted two communitywide public dialogues, attracting 100 participants, to give residents an opportunity to weigh in and share their priorities with the budget strategic planning committee. The meetings covered the budget deficit, its history and the agency’s collaborative budget process. Residents participated in facilitated small group discussions on what they valued about living in their community and what they considered to be “core” services.

The city manager notes that this process gives elected officials and residents a common understanding of budget issues and enables residents to contribute to budgeting decisions. Mayor Ron Garcia observes that such efforts keep residents informed and let them know that elected leaders are listening to their concerns.

In 2009, city leaders in Walnut Creek faced a $20 million budget shortfall for the next two years. Local officials knew that they needed to engage residents as partners in addressing the budget problem. As a first step, the city organized three meetings with representatives of local nonprofits, businesses and schools, as well as graduates of the city’s Citizen Institute and emergency preparedness programs and other interested residents. More than 100 people participated in these discussions about the city’s financial situation.

The city then held five workshops to encourage diverse participation. Attended by 130 residents, the workshops included a 30-minute presentation on the budget by city staff, followed by questions. Residents then participated in facilitated small group discussions to explore goals set by the city council and identify subgoals.

In the following weeks, the city invited residents to stop by the city hall computer lab and “invest” $500 among the goals and subgoals using a virtual bank account. Staff was on hand to answer questions during six two-hour drop-in sessions, and 170 residents weighed in. The goal “Culture, Recreation and Learning Opportunities” received 24 percent of the virtual dollars, followed by “A Safe Community” with 21 percent.

Throughout the process, the city published updates in its newsletter and online. “We wanted residents to know that this was an opportunity to step up and make a difference,” says Communications and Outreach Manager Gayle Vassar. City staff used the results, along with input from internal staff dialogues, to rank each city program on its effectiveness in achieving six priority goals.

Tips for Getting Started

To build the best foundation for successfully engaging the public, take these steps:

Daly City: In 2009, Daly City prepared a more in-depth educational mailer and survey on the budget that was also mailed to each home and available online.

Additional information is at: http://www.dalycity.org/City_Hall/Departments/Finance/Budgets_and_Financial_Reports.htm.

Walnut Creek: A report on Walnut Creek’s budget situation and one on results of the city’s “Balancing for Our Future” engagement process are available in issue 147 and 148, respectively, of the city newsletter. More information to help cities achieve fiscal health and wellness is available through about the International City/County Management Association (ICMA). To learn more, sign up for an account with ICMA.

Common Sense California has provided modest grants to cities and school districts to support public participation, including a number to support public involvement in budgeting. More information is available at www.commonsenseca.org.

Another useful tool is the book titled Marketing Your Budget: Creative Ways to Engage Citizens in the Bottom Line, written by Frank Benest and published by the International City/County Management Association (ICMA), 1997. The book is available from the Alliance for Innovation Online Store.