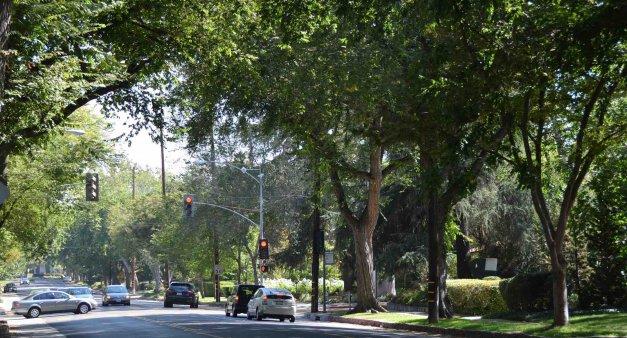 Residents and visitors alike affectionately refer to the City of Claremont as the “City of trees and PhDs.” When the drought threatened to wipe out a significant number of mature trees in the community, city officials took swift action. With assistance from community volunteers, the city developed and implemented a Tree Crisis Intervention and Outreach Plan to get critical tree care information and tools into the hands of property owners.

Through an educational campaign and direct contact with property owners, the city and its team of dedicated volunteers educated residents on watering techniques that maintained tree health while achieving a 36 percent reduction in water consumption. 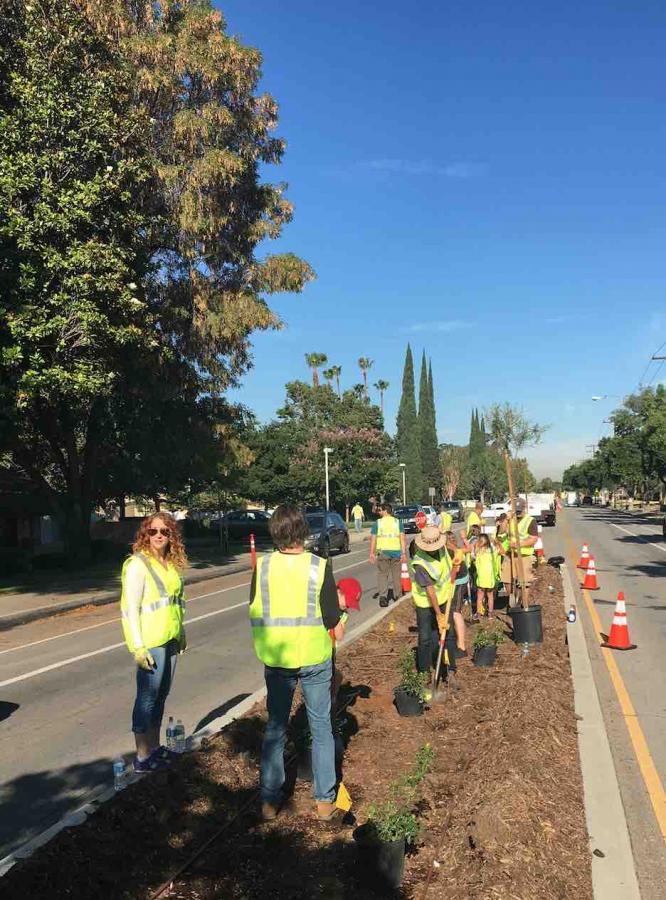 To find inspiration for its Tree Crisis Plan, the city looked to its own history of volunteerism and tree care. The City of Claremont was founded in 1887 as a Santa Fe railroad stop and home of Pomona College. Two years later, the town council formed a three-member committee on sidewalks and shade trees. One of the committee’s first items of business was to discuss planting 250 trees that had been donated to the township. Word spread of the committee’s plan to plant trees throughout the town, and residents showed up after the meeting to collect trees to plant near the college and town buildings. More than 100 years later, many of these trees still stand as a testament to the community’s volunteer spirit and passion for trees.

“Claremont’s trees and volunteers go hand in hand,” says Mayor Larry Schroeder. “From the very beginning, our trees have survived because of the efforts of volunteers. Today is no different from 100 years ago.”

Over the years, climate change, development and drought have taken a toll on the city’s urban forest. Claremont has more than 24,000 city-owned street and parkway trees and many more privately owned trees. To minimize the impact of climate change and development, the city’s planners have developed policies and programs that ensure the continued health and growth of the tree canopy. In 2013, the city council revised its tree policy to outline aggressive tree planting procedures and policies. Each year, the city plants hundreds of new trees and replaces trees removed due to disease and displacement.

Throughout the process of developing and revising tree policies and guidelines, Claremont has relied on community groups and individuals who advocate for trees. The Tree Action Group (TAG) is a community group that formed during the tree policy update and continues to advise the city on tree-related issues. The city also collaborates with Claremont Heritage, the local historical society, and Sustainable Claremont, a community group whose mission is to protect the city’s natural resources.

“The community’s involvement in creating our tree policies and programs is essential to their success. The depth of knowledge and the professional expertise in our community is unique and is reflected in the health of our urban forest,” says City Manager Tony Ramos. 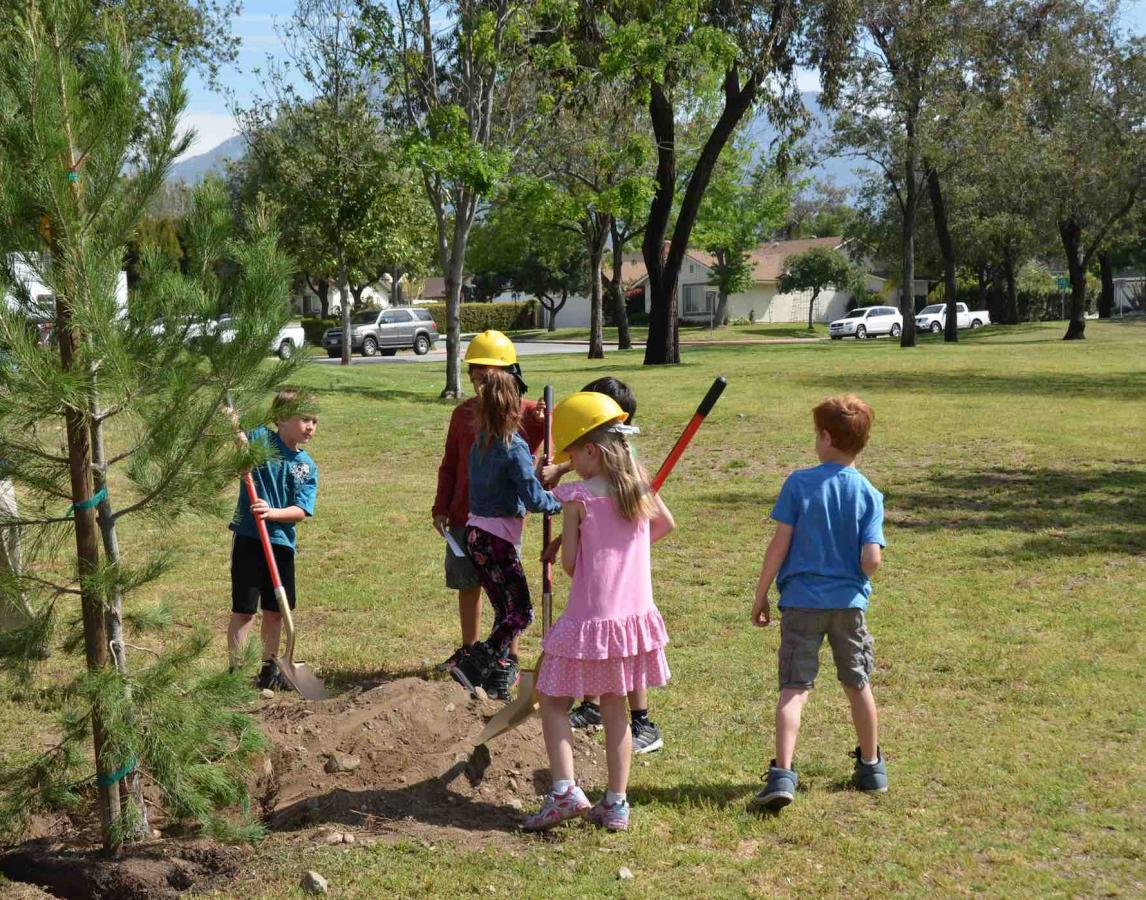 The Drought’s Effect on the City’s Trees

Following several years of hot dry weather, Claremont conducted a survey of city-owned trees in fall 2014 to get a baseline assessment of their condition. Arborists found hundreds of trees in various states of decline due to disease and drought stress. The city’s arborists worked with an urban forester to categorize the trees as critically, severely or moderately drought stressed. The city outlined a plan to educate property owners on tree care and efficient watering techniques.

In May 2015, Gov. Jerry Brown announced water restrictions and water conservation mandates for California cities to combat the four-year drought. The state gave Claremont a 32 percent water conservation goal. In response, the city enacted water restrictions that prohibited watering more than two days a week, reduced its watering in parks and stopped watering ornamental turf in its medians.

City officials worried that the reduced watering in municipal facilities and private properties would accelerate the decline of Claremont’s drought-stressed trees. Residents driving the tree-lined streets of Claremont began taking note of the many dying and withering trees. Concerned about the condition of the city’s prized trees, residents showed up at city council meetings and stopped by City Hall to express their desire to help save the trees.

The city staff quickly realized that a large group of residents was willing to assist with tree education efforts and began developing a program to put the volunteers to work contacting property owners. The city reached out to Claremont Heritage and Sustainable Claremont to recruit volunteers to educate residents about tree care.

Staff created informational materials and assembled tree-watering kits that contained soaker hoses, watering bags and instructions on how to properly water trees. City staff relied on tree data from the drought assessment to target homeowners with drought-stressed trees in their yards. 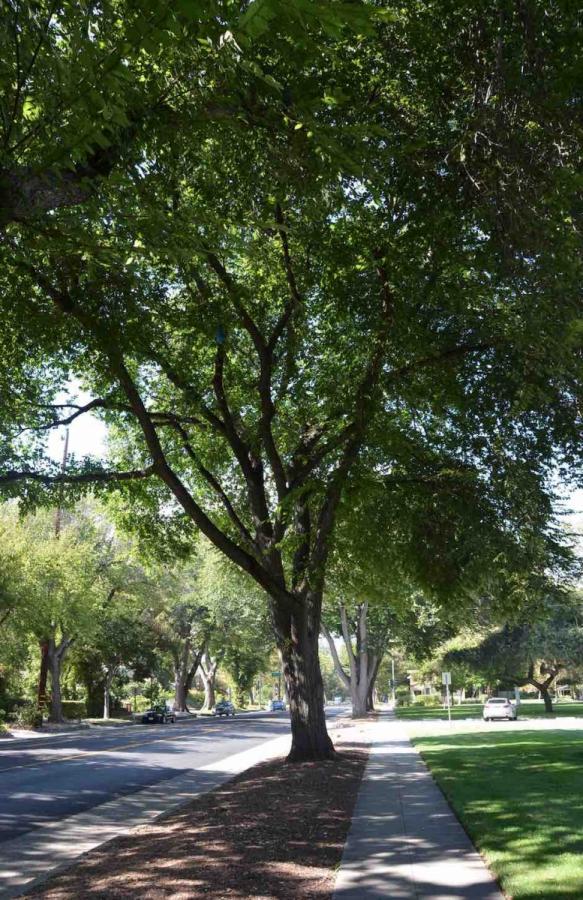 “We expected a few volunteers to show up for training and were surprised by the large number who turned out to help save our trees,” says Community Services Director Roger Bradley. “We were able to target many more property owners than we originally anticipated.”

After a training session with the city’s arborists, volunteers were given tree-watering kits and a list of addresses of homeowners to contact. The volunteers went door to door and demonstrated how to water trees effectively using soaker hoses and tree bags. If residents were not home, the volunteers left door hangers and conducted a follow-up visit with the assistance of staff as needed. The volunteers returned two weeks later to check if the bags and soaker hoses were being used. All visits were documented by the volunteers and given to staff for follow-up.

Throughout summer 2015, Claremont continued to promote tree care through mailers, a special tree care video and interviews with local news stations and newspapers. Residents were encouraged to call the city for information or to schedule a visit from an arborist.

City staff and volunteers contacted 147 property owners through the Tree Crisis Intervention and Outreach program. More than 200 trees received critical watering as a result of the program. In total, Claremont lost less than 1 percent of its trees due to drought stress.

The city invested less than $10,000 for educational materials and equipment for the program. The direct personal contact among volunteers, staff and residents played a key role in the program’s success. By speaking with the property owners, the volunteers could assess the obstacles and misinformation that caused residents to stop watering their trees.

Due to the overwhelming success of the program, the city began the process of contacting an additional 200 property owners on June 1, 2016, using new and returning volunteers. Since then, volunteers have approached approximately 350 property owners and provided assistance for over 500 trees.

Photo credit: Courtesy of the City of Claremont and the League of California Cities