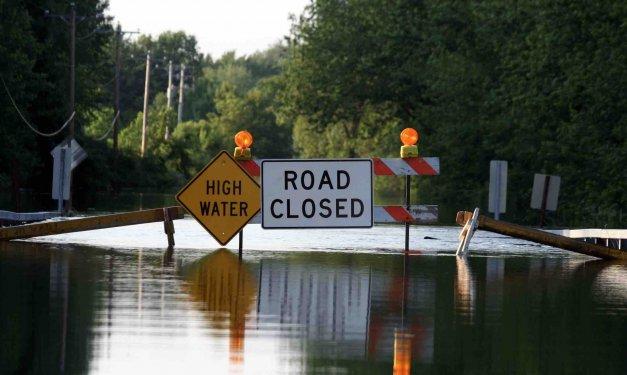 Aaron Kinney is a public information representative for the Communications Division of the City of San José’s Environmental Services Department and can be reached at aaron.kinney@sanjoseca.gov.

On Feb. 21, 2017, the latest in a series of rainstorms caused severe flooding in several neighborhoods in the City of San José, displacing hundreds of vulnerable residents and causing at least $73 million in property damage. The crisis prompted a massive emergency deployment that involved rescuing citizens by boat, establishing overnight shelters, inspecting damaged homes, distributing disaster relief and connecting residents with essential services.

For San José’s Environmental Services Department (ESD), the focus during the first days and weeks was cleaning up flood debris, including damaged property from people’s homes. Hundreds of tons of trash were collected and hauled to a landfill at no cost to residents.

Planning Ahead Pays Off

In responding to the Coyote Creek flood, ESD benefited from previous experience. After a similar flood in 1997, the city wrote provisions into its waste-hauling contracts that required the haulers to provide equipment and personnel during emergencies.

That meant the city could get debris bins, loaders and drivers out into the flood-ravaged neighborhoods within a few days to help building owners and tenants get off to a fast start in cleaning up and repairing their properties.

This sort of emergency services agreement is unusual for waste contracts, according to Jo Zientek, who was an ESD deputy director at the time of the flood, but it can yield significant benefits when disaster strikes.

Sang Ngo, who owns a four-unit apartment building in the Rock Springs neighborhood, says he appreciated the free debris bin service because he had so many other expenses. This landlord had to pay for the walls, floors and appliances to be removed and replaced in two ground-floor units. His insurer ultimately reimbursed him, but he lost four months of rent from the tenants who were displaced. “It was a painful process,” Ngo says. “The city put out a lot of effort to help the owners.”

Zientek, whose former division oversees the city’s recycling and garbage contracts, was at the Emergency Operations Center after the flood when the discussion turned to debris removal.

She quickly realized that providing 40-cubic-yard trash bins would not be enough. And she knew the city’s residential yard waste contractor had the right array of equipment to do the job, particularly “the claw,” a custom-built loader designed for grabbing loose plant material.

Zientek had seen the claw loader in action while out on ride-alongs with the waste contractor. That sort of hands-on knowledge is a useful resource during a crisis, says ESD Director Kerrie Romanow.

“A big emphasis for our leadership team is spending time in the field, seeing what we do,” says Romanow. “And that helps during these catastrophic events, because you have a more intimate knowledge of your capabilities as an organization. There’s a big difference between reading it and seeing it.”

That’s especially important in a large department like the ESD, which has 540 employees and a budget of more than $300 million. In addition to managing garbage and recycling contracts, the department provides drinking water to roughly 100,000 San José households, operates one of the largest wastewater treatment facilities in the state, recycles 12 million gallons of water a day for commercial customers, prevents pollution from entering the stormwater system and runs sustainability and habitat-protection programs.

It didn’t take long to realize that the claw, with its powerful pincer-like grasp, was perfectly suited for the job of hauling flood debris.

“We called for two claws, which rapidly showed the need for about a dozen claws,” says Zientek. “The deployment evolved quickly as we saw how effective it was.”

That sort of flexibility was critical to the city’s response, as was coordination between various departments. The ESD worked closely during the cleanup with the Transportation and Planning, Building and Code Enforcement departments.

Help From the Community

San José Mayor Sam Liccardo has placed a strong emphasis on cleaning up the city through his Beautify San José initiative, or #BeautifySJ, which aims to boost civic pride through aesthetic improvements.

In the days after the flood, the #BeautifySJ team worked with city staff and community partners to recruit more than 4,000 volunteers to help clean up hard-hit neighborhoods. Over the next several weekends, the volunteers helped the city haul more than 2,000 tons of debris and ruined materials to a landfill.

Remaining Nimble Is Part of Resiliency

The unit supports the #BeautifySJ goals by removing couches, appliances and other large items discarded on city streets. In addition, the team was certified in 2016 to handle household hazardous waste, from paint and pesticides to batteries and fluorescent tubes.

After the flood hit, the city dispatched the five-person team to remove accumulating household hazardous waste rather than paying a contractor. That enabled the city to get the waste off the streets quickly and prevent toxic material from entering storm drains.

The team disposed of roughly 6,000 gallons of hazardous liquids and 21,000 pounds of toxic solids.

“The quick action of our Illegal Dumping Rapid Response Team played a critical role in our post-flood cleanup effort,” Mayor Liccardo says. “By removing tons of waste, the response team cleared the way for residents to begin to rebuild and kept garbage and pollutants out of our waterways.”

For Zientek, the team’s versatility showed the value of keeping some core services in-house — at a time when many cities face tough decisions to outsource essential functions.

“If your city or agency outsources everything,” she said, “you may lose some of that internal resiliency to respond when emergencies strike.”

Officials at the Emergency Operations Center worked diligently to inform residents during the recovery. As the debris bin service got underway, for example, the city distributed flyers and staff knocked on doors to let residents know what
was happening.

Equip field staff who aid in recovery efforts with FAQs to disseminate during recovery efforts.When residents encounter a city employee in the aftermath of a disaster, they see a source of information, regardless of the employee’s department or normal responsibilities, and typically ask questions. Give employees tools like FAQs to help them respond to residents’ concerns.

Time services to match residents’ schedules. The ESD could have timed the free debris bin service better to match residents’ schedules, says Zientek. The service typically began at dawn and wrapped up by mid-afternoon, in keeping with the schedule of regular volunteer cleanups. But residents, many of whom were living in shelters or with family, typically got started later in the morning, and their activity peaked in the afternoon as city workers and volunteers were wrapping up.

The department is looking at other ways it could help disaster-stricken residents and how to make sure volunteers have all the equipment they need. And additional training may be warranted so that more staff have the knowledge and expertise to lead during emergencies.

“We were lucky Jo Zientek was at the command center — she is likely one of a few staff who knew about the contract provision,” says Romanow. “We need better and broader understanding.”

California cities deal with emergencies that include wildfires, floods, mudslides and earthquakes. As city officials and staff help their communities recover from the latest in a series of disasters statewide and think about the next round of preparedness training, San José’s experience serves as a reminder that awareness of a seemingly minor detail can pay off when it matters most — when residents are waiting for help.

Photo credit: Courtesy of the City of San José.