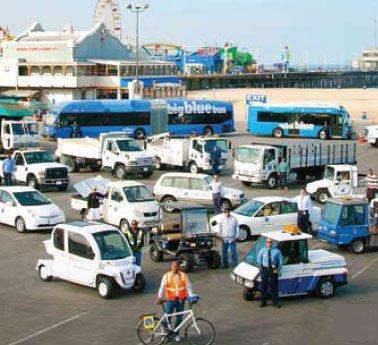 Yvonne Hunter is program director of the Institute for Local Government’s Climate Change Program and can be reached at yhunter@ca-ilg.org.

Cities and counties throughout California are considering adopting policies and programs to “green” their fleets by purchasing fuel-efficient and alternative-fuel vehicles. While many agencies already have experience in this area, some local officials have questions regarding green fleet options.

The Institute for Local Government (ILG) conducted a survey in 2010, through its climate change program, that asked local officials what questions they have regarding green fleet options. ILG used the survey results to develop information to help local officials evaluate their options related to green fleets. The project was funded by AAA Northern California, Nevada and Utah.

Flexible-fuel vehicles, another type of alternative-fuel vehicle, can run on gasoline or a gasoline-ethanol blend of up to 85 percent ethanol, also known as E85.

Can public safety departments use fuel-efficient and alternative-fuel vehicles?

Can we purchase fuel-efficient and alternative-fuel vehicles through the California Department of General Services’ Master Vehicle Contract program and still work with local auto dealers?

Local agencies generally prefer to buy locally when possible. But they also like to take advantage of opportunities to save money and use taxpayer dollars wisely. While many local agencies find the potential cost savings of using the Department of General Services’ (DGS) purchasing power attractive, they also want to support local auto dealers. In some cases, it’s possible to do both.

DGS maintains Master Vehicle Contracts that cities and counties can use to purchase fuel-efficient and alternative-fuel vehicles at lower prices than might otherwise be available. DGS develops specifications for different types or classes of vehicles, such as hybrid sedans, and awards contracts to specific dealerships for a single model in each class. DGS awards contracts to two dealers for each class of vehicles; one dealer (based in Sacramento) covers Northern California, and one (based in Los Angeles) delivers to Southern California. While the DGS Master Vehicle Contracts apply only to selected dealerships, the contract specifications and pricing are publicly available. Using these publicly available resources as a starting point, local agencies can explore purchasing opportunities through local dealers.

What if our agency cannot afford to convert 100 percent of its fleet at one time?

Most agencies do not have the resources to convert their entire fleet to fuel-efficient or alternative-fuel vehicles at one time. However, many adopt policies to phase in the purchase of green vehicles, thus incrementally increasing the number of green vehicles in their fleets over time.

Based on their experience, public agencies report the following key lessons learned about green fleets:

Alameda County began integrating alternative-fuel and fuel-efficient vehicles into its fleet in 2002. Since then, the county added more than 130 hybrid vehicles and explored a variety of alternative-fuel technologies, including biodiesel, waste vegetable oil, compressed natural gas (CNG) and electric vehicles.

Culver City has a CNG fleet that includes 605 on-road and 15 off-road vehicles used by all city departments. A newly remodeled and expanded CNG fueling station supports the vehicles.

Lakewood maintains a fleet of about 100 light-duty vehicles, 27 of which are powered by CNG and include cars, vans and pickup trucks.

The City of Santa Monica adopted its first sustainability policies in 1994. Today, 87 percent (566 vehicles) of its municipal fleet runs on alternative fuels, including CNG, propane, hydrogen, biodiesel and electricity. (The fleet numbers do not include fire or police response vehicles.) In addition, its transit system includes 198 Big Blue Buses, which operate exclusively on alternative fuels.

Ventura County’s fuel-efficient and alternative-fuel vehicles program includes a broad range of hybrid vehicles. The county adopted a no-idle policy for all diesel and gas vehicles that requires operators to turn off idling engines after one minute.

Taking steps to make agency fleets greener has other benefits in addition to potential fuel and cost savings and lessening dependence on foreign oil. Because transportation is the largest generator of greenhouse gas emissions, reducing fuel use helps to decrease such emissions.

For more information about green fleets, see the following:

This article appears in the July 2011 issue of Western City
Did you like what you read here? Subscribe to Western City

Increasing fuel prices and tightening budget constraints have many local officials exploring a transition to fuel-efficient and alternative fuel vehicles.