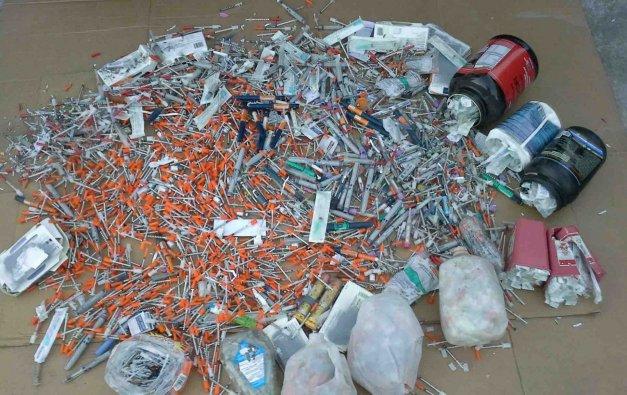 Focusing on Safe Disposal of Sharps and Pharmaceutical Waste

It’s not often that simple policy changes can address both public and environmental health hazards simultaneously. California local governments have found an effective solution to fund and manage the disposal of home-generated sharps and pharmaceutical waste.

Extended producer responsibility (EPR) is a policy used worldwide, whereby producers design, fund and administer programs to manage their products at the end of the product’s life. EPR means companies include the expenses of products’ end-of-life management in the cost of doing business.

Medical sharps, such as syringes and needles, are a growing public health risk. Between 2015 and 2016, hypodermic needles found on the streets of San Francisco increased more than 40 percent, according to a report from San Francisco’s Office of the Controller. Public works crews found thousands of used needles during March 2017 encampment cleanups in downtown San Francisco. In Burbank, “Sharps stuck 10 percent of recycling facility workers in 2015,” says Kreigh Hampel, the city’s recycling coordinator. “In 2016, workers pulled 3,000 pounds of sharps from the sorting line. This is a significant worker safety issue.”

Unwanted medications and sharps have in common a lack of safe, free and convenient disposal options. Recent efforts to address the problem at the state and federal levels have been largely unsuccessful in the face of industry opposition.

Alameda County was the first to address the problem by passing a Safe Drug Disposal Stewardship Ordinance in 2012, which required the pharmaceutical industry to fund and administer a convenient medications take-back program for residents. The pharmaceutical industry sued and lost in federal court and appealed in July 2014 and lost again. When the U.S. Supreme Court declined to hear the case in 2016, it affirmed a major precedent that local governments could require producers of hazardous products to take them back.

To put the cost into perspective, the industry agreed in the Alameda court case that a drug take-back program would cost 1 cent per every $10 sold. In Alameda County alone, drug sales totaled almost $1 billion per year. The court found there is no cost burden to the industry. Eight California jurisdictions have now passed EPR ordinances.

“It’s a big deal,” says London Breed, president of the San Francisco Board of Supervisors. “Our legislation made producers responsible for funding and operating a collection program.”

Now, Alameda County, San Francisco, San Mateo and other local governments are seeing the positive results of adopting EPR ordinances. San Francisco has 26 medicine bins and San Mateo has over 22 medicine bins in place, with more coming soon, that the pharmaceutical industry funds and operates. Santa Cruz County has seven bins operating with at least seven more coming, adding to the 20 bins the county distributed years ago for medicines and sharps.

Innovative cities and counties are sending a message to the companies profiting from these products: They must share in the cost of the products’ end-of-life management. Protecting public health and the environment is an important priority for communities throughout California. Local governments’ EPR programs are working and offer policy models for other states — and perhaps even the nation

Photo credit: Courtesy of the City of Burbank and the California Product Stewardship Council.