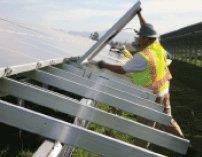 Hollister Uses Solar Technology to Save Money and Educate Workforce

The City of Hollister lies 40 miles south of San Jose and 40 miles inland from Monterey; with a population of 35,165 it’s the only major municipality in San Benito County. Unpredictable electricity rates have presented a challenge for the city in recent years. But with plenty of sunlight and clear skies, it’s an ideal location for generating solar power. Hollister considered these factors and began exploring the idea of using solar power to run its new $120 million wastewater-treatment plant.

After looking at a number of possibilities, staff began discussions with a private-sector solar energy services company in 2009. The company proposed to finance, build and own a 1.2-megawatt solar installation on 3.2 acres at the wastewater-treatment plant. The city in turn agreed to purchase electricity from the company at reduced rates. In addition, the company proposed creating educational programs to train local workers for the solar industry.

The Hollister City Council signed a power purchase agreement with the company in January 2010, which stipulated that only local labor would be used to build the plant. The panel installation phase created 20 local jobs, and six positions were in place for the entire six-month construction phase. Later in 2010, the Hollister School District signed a similar agreement for installing solar panels at nine schools and its district office.

Projects such as this can generate controversy in small communities. Hollister was fortunate to have the support of the local chamber of commerce, San Benito Economic Development Corporation, San Benito Business Council and the Santa Clara-San Benito Counties Building and Construction Trades Council.

The San Benito Economic Development Corporation stepped up to take the lead in implementing the educational component through its Clean Energy Technology Center, which is focused on creating a world-class green workforce by providing local access to training and education. The center’s partners comprise a network of public and private entities, including the International Brotherhood of Electrical Workers (IBEW), the San Benito County Workforce Investment Board and West Valley College.

Nancy Martin is president of the San Benito Economic Development Corporation. She says, “West Valley College and the IBEW conducted a 118-hour course for 20 students who wanted to improve their skills or learn new skills. The plant’s construction provided a great opportunity for hands-on learning about how solar power works and what it takes to develop a solar farm. The students heard firsthand from the electrical workers about their experiences in the solar industry.” The solar power plant went online in October 2011.

As the school district’s solar project moves forward, the Clean Energy Technology Center is planning more classes that use the installation as a learning experience. Martin says, “We’re broadening our efforts to provide education at all levels so everyone — even the youngest students — can learn how solar power operates. We’re also looking forward to expanding the public-private partnership.”

The City of Hollister has made a significant commitment to green energy and sustainability with this project. In addition, the educational component of the project provides skills and training for tomorrow’s workforce.

This article appears in the June 2012 issue of Western City
Did you like what you read here? Subscribe to Western City