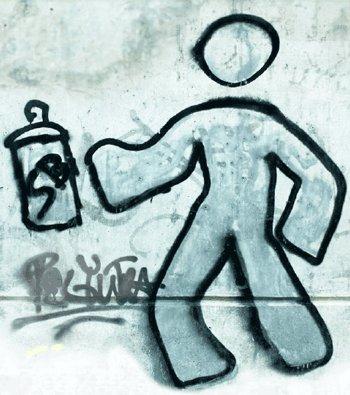 How Cities Can Remove and Deter Graffiti and Maximize Cost Recovery

Matthew R. Silver is a partner in the law firm of Silver & Wright LLP.

Many cities suffer from some amount of graffiti in the community. Often associated with gang activity and other criminal elements, graffiti “taggers” spray, etch and paint their monikers in commercial areas and residential neighborhoods. Taggers demarcate territory, set gang boundaries and send messages to each other and the public on all types of public property, including in parks and on fences, signs and underpasses.

Such conduct can result in more than just blight. Graffiti may have a negative impact on the community at large as well as the city charged with removing it. But cities have the power to eliminate and deter graffiti while recovering the expenses of cleanup, investigation, staff time and attorneys’ costs. Furthermore, these expenses can be recovered from the tagger and, if the tagger is a minor, from the minor and his or her parents or guardians. In addition to helping offset the impact of graffiti on cities and taxpayers, cost recovery helps deter graffiti by penalizing the taggers and holding them and their parents or guardians accountable.

The Costs of Graffiti

By some estimates, graffiti has resulted in a national cost of more than $12 billion1 just for cleanup. Many of these expenses are incurred by public entities and thus taxpayers. Residents also incur costs to remove graffiti from their private property. In addition, graffiti damages local businesses — a fundamental tax base for cities. Graffiti can create the appearance of a run-down and potentially dangerous area, scaring away customers or at least making them feel uncomfortable. For the same reasons, nonresidents may be less likely to visit or shop in the affected community and spend money there.

Perhaps even more damaging are the societal costs. Unremediated graffiti plays into the hands of the “broken windows theory,” which holds that blight begets crime. Left for long enough, blight (including graffiti) may lead to community degradation and increased crime, which in turn can result in a vicious circle of more blight and crime.

Graffiti may also intimidate residents. Residents may feel less safe when they see graffiti, particularly when they associate the graffiti with gangs or criminals. Property owners may even confront taggers, resulting in assaults and other violence.

There are few, if any, groups supporting taggers. Unlawful graffiti is a nuisance that should be eliminated and deterred if the community is to maintain or improve its quality of life. However, in times of limited city personnel and resources, removing graffiti quickly and completely can present a significant challenge. To overcome this challenge, cities should utilize a comprehensive solution that not only punishes those who cause the graffiti but also allows the city to recover its costs incurred in the abatement.

The Solution: A Comprehensive City Ordinance Based on State Law

Communities benefit most from a comprehensive approach to combating graffiti. This means not just removing the graffiti itself but also recovering the costs for the cleanup, addressing the criminal behavior of the tagger and even putting pressure on parents or guardians to take more responsibility for their minors.

While some cities look to recover “restitution” (payment for the cost of graffiti removal) as part of a tagger’s criminal conviction, others have been disappointed when the payment never arrives because the minor may be unemployed or has no other assets. Further, the obligation to pay damages to the city ends along with the minor’s probation, if any, which may be a short period.

Consequently cities may wish to control their own cost recovery. State law provides the authority for this approach by statute, declaring graffiti a nuisance and allowing cities to impose the “expenses” of graffiti abatement on the tagger and, if a minor, on both the minor and parents or guardians.2Expenses include, but are not limited to:

With a properly drafted ordinance, cities can also add to the list of recoverable expenses to include other costs incurred related to the abatement.

To take advantage of these broad tools, cities must adopt an ordinance. State law already provides a good template for the ordinance, although each city should consider making modifications to provide for maximum cost recovery based on the particular city’s needs.

The ordinance should also define graffiti broadly and provide a standard for determining liability for graffiti violations.4 State law already provides a laundry list of definitions, which the ordinance should mirror. Taggers, whether minors or adults, are liable under the state law if, among other requirements, they have been convicted of or pled guilty or no contest to the graffiti-related violation. They can even be deemed responsible — for purposes of this remedy — simply by confessing or admitting to the graffiti. This is the easiest and most common basis for liability, especially if the city’s police or code enforcement officials properly seek and obtain that information when interviewing a suspect.

Cities should also make sure to include other enforcement remedies in the ordinance, such as the ability to recover civil penalties of up to $1,000 for each incident.5 This provides a strong carrot-and-stick approach when negotiating a settlement, if any, with the tagger and/or the parents or guardians. In addition to being subjected to a city’s civil penalties and cost recovery, criminal liability for graffiti can effectively supplement the city’s ability to impose liability and achieve cost recovery, providing an effective one-two punch to deter future violations. The abatement ordinance should therefore also provide that placing graffiti within the jurisdiction constitutes a misdemeanor, which is punishable by a maximum penalty of a $1,000 fine and/or six months imprisonment.6 The city may then prosecute a tagger for the criminal violation, potentially resulting in additional fines and probation. Future acts of graffiti during probation would increase the punishment. Juvenile taggers may also be prosecuted by the state in juvenile proceedings. The ordinance may further provide for payment of triple the expenses for the abatement if there have been at least two civil or criminal judgments against the tagger within a year.7

In addition, the ordinance should provide for actual recovery of the fines and expenses by attaching the costs to real property — owned by the tagger or the parents or guardians of the tagger — through a lien or special assessment.8 Traditional recovery methods, such as wage garnishment, attachments and personal property liens, may also be available.

Finally, the city should establish an effective enforcement system for the ordinance among the various city departments, including for tracking and abating graffiti and identifying those responsible. City staff should not hesitate to enlist the help of the city attorney or special counsel to enforce the ordinance and recover the defined expenses and penalties, as even attorneys’ fees may be recoverable.

Diligently and properly enforced, a graffiti abatement ordinance can have a dramatic effect on deterring graffiti and restoring the local community’s sense of pride and safety. In one Orange County city, for example, graffiti cleanup costs totaled $183,000 in 2010 alone.9 The following year, the city enacted an ordinance containing many of the provisions recommended in this article. Throughout 2011 and 2012, the city diligently enforced the new ordinance and brought enforcement actions against taggers and their parents, seeking recovery of all costs associated with the graffiti as well as penalties to deter future violations. In the first calendar year alone, graffiti removal costs in the city were reduced by roughly half.10 The city also made a point of targeting the more prolific taggers, who had caused tens of thousands of dollars of damage throughout the community.11

Other cities may achieve similar or even better results, but they must first enact the appropriate ordinance and enforce it consistently. This action will send the message to taggers and their parents that the community will no longer tolerate such conduct, and they will be held responsible for the costs and penalized accordingly.

While many cities may never be completely free from graffiti, by employing the tools described here those cities can substantially reduce graffiti, pressure those causing it to change course, and recover the costs incurred for abatement. Cities may find that these actions reduce the economic and societal costs of graffiti in the community, while providing an effective deterrent for taggers and impetus for their parents or guardians.

This article appears in the August 2013 issue of Western City
Did you like what you read here? Subscribe to Western City