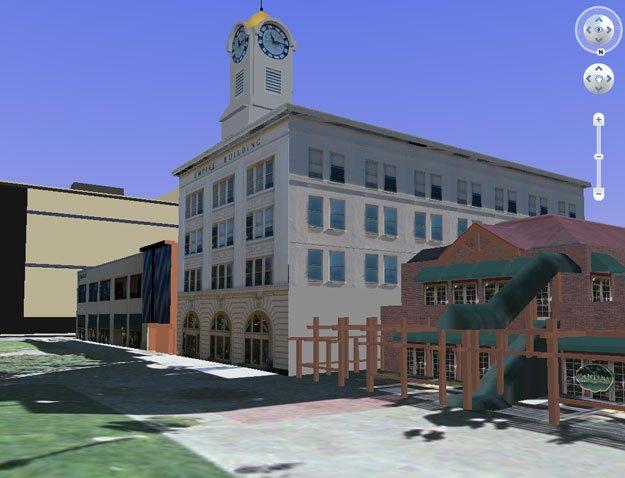 How GIS Can Save Money and Increase Efficiency for Cities

Eric McHenry is chief technology officer for the City of Santa Rosa and can be reached at emchenry@srcity.org.

Throughout California, city officials are grappling with how to continue delivering essential services to their communities while revenues and budgets are shrinking dramatically due to the economic downturn.

GIS functions as a repository of information associated with fixed assets. Municipal GIS captures information about the city’s assets – typically land use information (such as parcel number, parcel owner, permits and zoning) and physical items (such as street lights, traffic signals, utility meters, water pipes, sewer infrastructure, street trees, pavement, curbs and sidewalks). What makes GIS different from traditional databases is that it associates geographic placement, in latitude and longitude, with each asset. Consequently it’s possible to make decisions based not only on a type of asset but also on the asset’s location.

Before Santa Rosa implemented GIS, notifying residents as part of the planning and design review process was cumbersome and time consuming. City staff had to manually identify all parcels of land within a certain radius of planned development and then create mailing labels for official notifications. For any given notification, this process took a significant amount of staff time and created opportunities for errors because small corners of parcels were easily missed.

By using GIS to automate the notification process, the city reduced by 90 percent the amount of staff time needed to do the job. The GIS-based process is simple:

The cost and time savings associated with even this simple GIS operation paid for the system deployment. 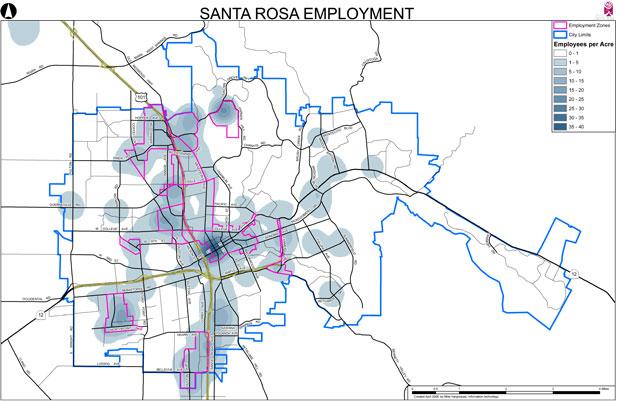 One of the immediate benefits of GIS is the ability to provide excellent, accurate visualizations through mapping. Unlike commercially available mapping products, GIS can combine land use information (such as zoning, permitting, parks, developments and creeks) with standard street maps and aerial views. This mapping capability enables staff to present significantly more useful information for official city meetings by zeroing in on just the elements needed for consideration. Before Santa Rosa began using GIS, much of the information needed for a specific decision or purpose was combined with many other unrelated layers, making the visual presentation confusing and slowing the process.

Presenting only the needed information using a clear graphic format has produced a better informed public, more efficient decision-making and enhanced civic participation. Santa Rosa has experienced these results consistently on projects ranging from General Plan amendments to zoning changes, design reviews, street maintenance and downtown developments. It is rare today to see a staff presentation in the city that doesn’t use GIS-based maps when discussing local development issues.

Using GIS as the standard database for any agency-owned or -managed asset that has a fixed geographic location makes it easier to manage those assets, and GIS is a natural first stop for residents and staff for information on an asset’s status. For example, a person can access GIS, navigate to a particular parcel (by address or by using map zooming tools) and find information about that parcel and/or surrounding parcels. Frequently sought information includes planned development, permits and parcel numbers.

In Santa Rosa, a recent example of suc cess in this area involves the city’s tree management. Street trees are a natural fit for GIS-based management. They exist in the city at specific geographic positions, they require regular attention (pruning, maintenance and sometimes replacement), and the city needs to track them by several factors, such as species, age and height. Santa Rosa recently entered a large number of street trees into GIS. With this information as a foundation, city workers doing maintenance in the field have the ability to update information about the trees using a portable device, without having to return to the office to look up or transcribe paper records. Furthermore, the spatial technology allows more efficient work order deployment, because the location of the assets can also be considered as part of the work order creation.

In addition to increasing staff efficiencies and facilitating civic participation, GIS has opened up some interesting new revenue channels for the City of Santa Rosa, mainly centered on value-added services delivered by its GIS support team.

GIS data is generally considered to be public information and not subject to fees for access. In fact, the City of Santa Rosa hosts free GIS access on its website (www.srcity.org/maps). This free access allows businesses, residents and visitors to use the interactive GIS to view planned development, obtain certain asset information, view permits, see detailed aerial images and more. The city also provides enhanced fee-based access for individuals or businesses who want customized information that can be created by the GIS support team. The revenue from this subscription service is growing as developers, architects, engineering firms and other businesses begin to rely on GIS data to streamline their internal work.

Another source of GIS revenue comes from hosting GIS services for several nearby cities. Typically such cities have an interest in the efficiencies of GIS, but lack the necessary technical internal resources to manage the system themselves.

The Next Step: Incorporating 3D Visualization

Recent technology innovations from the private sector have enabled GIS to expand beyond simple two-dimensional imagery. It’s now possible to quickly generate and view three-dimensional (3D) imagery within GIS, which is particularly helpful when visualizing planned or proposed development within the context of existing infrastructure. The ability to show the existing cityscape with planned or proposed elements in place allows policy-makers, staff and interested citizens to see which options best serve the interests of aesthetics, functionality and visual impact. Without these 3D tools, information relating to planned development is often restricted to the development itself, not to how the planned development will look in context with existing buildings.

This article appears in the June 2009 issue of Western City
Did you like what you read here? Subscribe to Western City