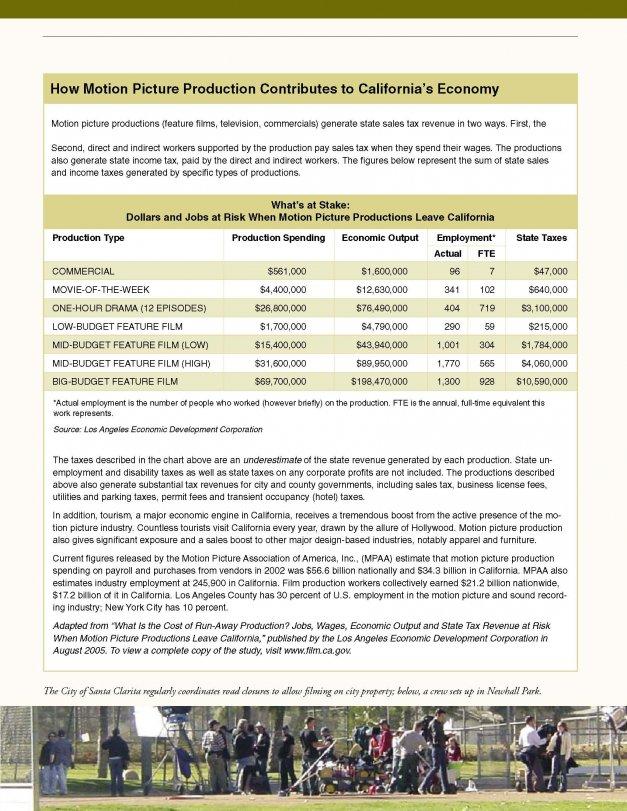 How Hollywood Can Boost Your Local Economy

A typical movie on location spends more than $50,000 a day on hotels, restaurants, gas stations, dry cleaners, hardware stores and area labor. Local communities reap economic benefits whenever film productions come to town; jobs are created, money flows into local businesses and tax revenues are generated. For those very reasons, other states and countries are aggressively competing with California for film production.

These are a few of the facts presented by Amy Lemisch, director of the California Film Commission, at a joint meeting of the League’s Los Angeles Division and the League board of directors, hosted by Paramount Pictures in February 2006. City officials heard from several speakers who shared tips on attracting film-makers and encouraged cities to pursue such opportunities. League members also shared their positive experiences of hosting film crews shooting on location in their cities.

In his welcoming remarks, League President and Los Angeles City Council Member Alex Padilla said, “Every movie is an economic development project for the community where it’s shot.”

As Santa Barbara’s example illustrates, the impact on tourism from regional film production cannot be underestimated. Danville City Council Member and League Board Member Mike Doyle confirmed this when he commented that years after the film “Mrs. Doubtfire” shot scenes in his city, tourists still come to the restaurant to eat in the same spot where Robin Williams, Sally Field and Pierce Brosnan shared a memorable meal in the film.

Santa Clarita City Manager Ken Pulskamp talked about his city’s role as the traditional home of the TV show “Bonanza” and location of the John Ford film “Stagecoach.” Although feature film production in Santa Clarita has declined as companies leave to shoot in other states that offer tax incentives, Pulskamp said, “We do have good news to report; TV production is substantially up for us.” Several well-known television shows call Santa Clarita home, including HBO’s “Deadwood” and “Big Love,” “NCIS” starring Mark Harmon, and two new shows, “The Unit” and “Windfall.”

Pulskamp said there are several reasons why Santa Clarita has been able to successfully attract filming. “Our attitude is that we’re on the same team as the film industry and we’ve built a structure that is able to accommodate the unique needs of filming,” he said. “Filming is a high priority for the city and we’ve hired two full-time city staff who are empowered to take risks and make things happen. We regularly coordinate road closures, and allow filming on city parks and other properties. We understand that it’s a fast-paced business and we can turn around film permits in the same day. We don’t have a business license fee and there’s no business utility tax.”

Why does Santa Clarita do this? Pulskamp explained, “The dollars spent by film companies have a huge impact on our local economy and increase our sales tax revenue tremendously. We estimate that over $16 million was spent in Santa Clarita by companies filming on location in 2005. That’s not counting filming occurring in local studios and soundstages, but specifically just location filming. Even though we’re only 20 minutes north of Hollywood, many of the productions that film in Santa Clarita put top-level crew and cast in our local hotels.”

Producer Ron Smith pointed out, “Film-making is a very pollutant-free industry. We come in, we set up, we shoot, and then we tear it down, we clean up our mess and we go away. It’s very clean.” Producer Marian Rees agreed, saying, “When we shot ‘Foxfire’ on location with Jessica Tandy and Hume Cronym, we pledged to leave the area cleaner and better than we found it. We did that, and we also built a historically accurate cabin for the production that met local code requirements and still stands today outside Highlands, North Carolina. The film industry offers communities a win-win model of good business sense.”

How to Make Your City The Next Big Star

Brian Unger, a member of the Directors Guild of America, told city officials, “There are tremendous opportunities for those of you with great locations.” Cities interested in attracting film and TV production should consider taking the following steps:

The California Film Commission Can Help

The California Film Commission (CFC) was created in 1985 to facilitate, retain and attract film production in California and serves as a one-stop office for film-makers. The CFC issues more than 2,000 permits each year to production companies that wish to film on state property. The CFC also serves as a key liaison between the production community and all levels of government, working to make all of California more film friendly. The CFC partners with more than 60 local film offices to offer the following services:

Motion picture productions (feature films, television, commercials) generate state sales tax revenue in two ways. First, the production itself pays sales and use tax on everything from the purchase of materials for set construction to equipment rental. Second, direct and indirect workers supported by the production pay sales tax when they spend their wages. The productions also generate state income tax, paid by the direct and indirect workers. The figures below represent the sum of state sales and income taxes generated by specific types of productions.

Tale of the Two-Dollar Bills: An Exercise In Economics

Marian Rees (shown above) is an network TV and motion picture producer whose award-winning work includes “All in the Family,” “The Autobiography of Miss Jane Pittman” and “Between Friends.” Speaking to League members, she said, “When we wanted to shoot in Canton, Mississippi, at first the locals were opposed. We explained the economic benefit for the town; they were skeptical but agreed.” During production, the film’s crew used $2 bills to pay for everything they purchased locally. When filming was completed, the town was awash in $2 bills. Rees recalled, “We built a lot of goodwill — and those $2 bills really helped.”

Marketing for Film: Take Another Look at Your City

At a recent League meeting, California Film Commission Deputy Director Michael Kelly spoke about the economic benefits of attracting film-makers to shoot in local municipalities. One city official asked, “How can we market our city as a film location? We are not a garden spot; our city is intensely urban and we’re completely built out.”

Kelly replied, “There’s a movie waiting to be made in every location. Films are as diverse as your cities. Not every scene in every film is in a beautiful setting or even outdoors. Many movies are made using a variety of interiors in existing buildings; some feature a gritty urban setting to create a mood of realism.”

Take another look at your city for potential film locations:

Every city has numerous spots that are visually interesting, each with its own distinct flavor. The challenge is to look at your city with fresh eyes and take note of what might make a good backdrop or unusual location. Then contact the California Film Commission for assistance.

Jude Hudson is editor-in-chief of Western City and principal of Hudson + Associates, a Sacramento-based communications consulting firm. She can be reached at editor@westerncity.com

This article appears in the May 2006 issue of Western City
Did you like what you read here? Subscribe to Western City