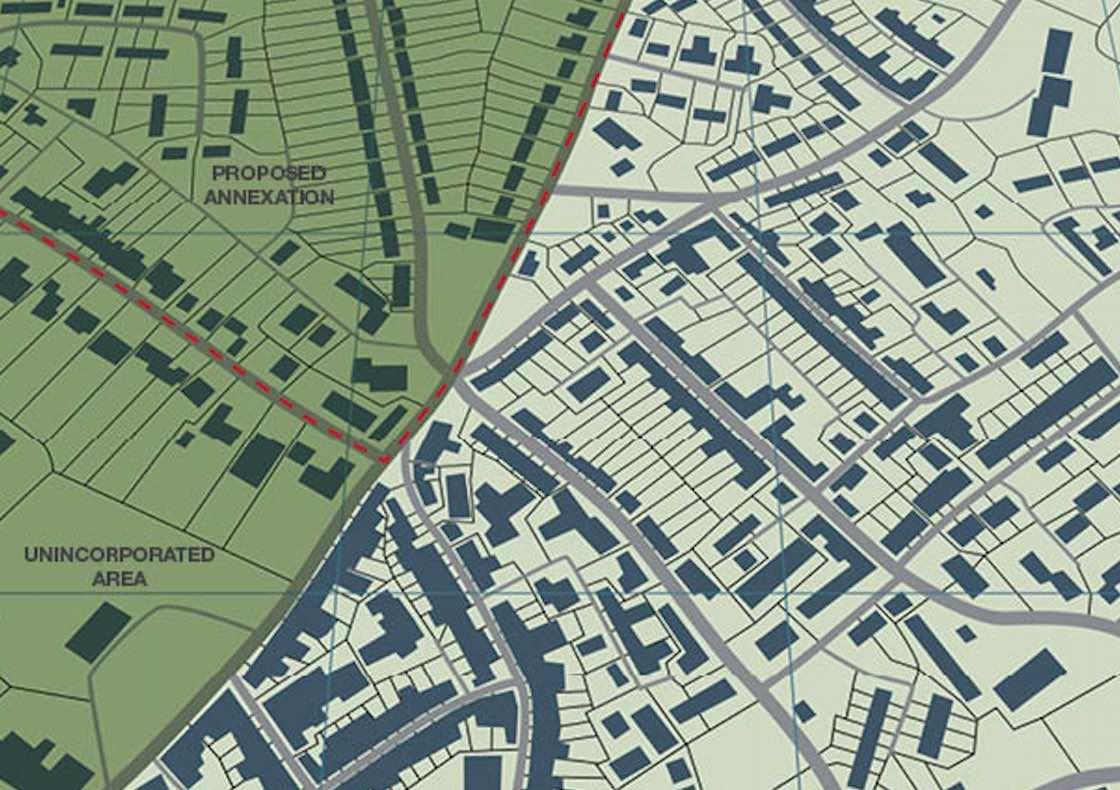 In 2011, a budget trailer bill — SB 89 (Chapter 35, Statutes of 2011) — was rushed through the legislative process with no public hearings and swept away over $200 million annually in vehicle license fee (VLF) revenues from cities. Recently incorporated cities and cities that had recently annexed inhabited territory suffered significant fiscal harm.

Over 140 annexing cities lost revenue from SB 89 that they relied upon to provide essential community services to new residents. The affected cities depended on these revenues when they made a policy decision to annex territory and serve new residents. The total annual loss for the 140 affected cities in 2011 was $4.3 million, and in today’s dollars it is more. While some cities lost smaller portions, others suffered significant annual losses, including:

In February 2018, Assembly Member Eloise Gómez Reyes (D-Colton) introduced AB 2268. The bill would restore both the revenue lost by the affected cities and incentives for future annexations going forward.

“Restoring revenue for inhabited areas annexed into cities is critical to making these cities whole,” says Assembly Member Reyes. “The areas affected, which included cities in my district like San Bernardino and Fontana, incorporated these areas to ensure they had vital services and access to resources. In the aftermath of the changes to vehicle license fee policies last year, now is the time to address restoring resources to cities affected by this annexation exemption.” 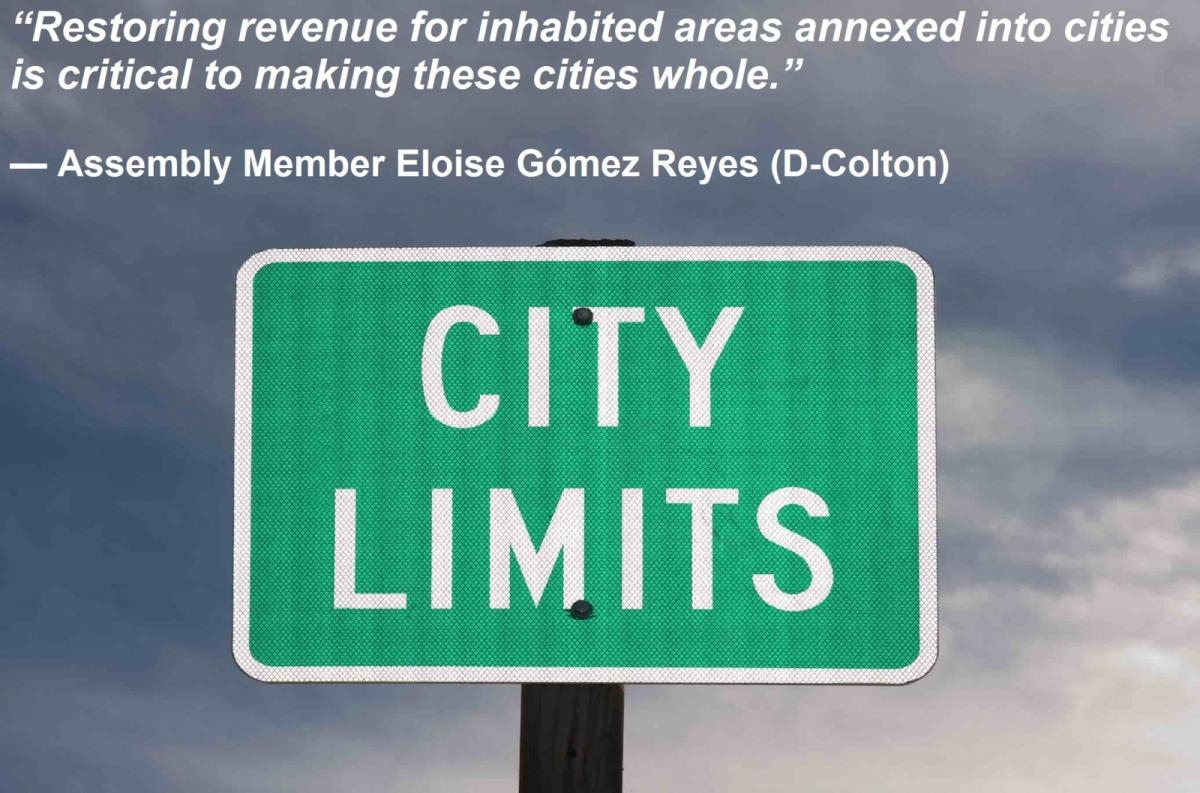 After Gov. Jerry Brown vetoed several proposals, a breakthrough occurred in 2017 with the passage of SB 130 (Chapter 9, Statutes of 2017), which provides a financial fix for the four cities. SB 130 gives these cities additional shares of property tax to offset their annual VLF losses going forward (the state Department of Finance estimates the cost of the fix is between $17 million and $19 million for the state).

With this issue finally addressed for the four cities, the policy discussion must resume about how to also restore:

Since the passage of SB 89, cities lack sufficient incentive to annex and serve inhabited unincorporated areas. This is not only a problem for the affected communities — it has state policy impacts, too.

The State of California has policies in place that support annexation and consolidated service delivery, including:

Before 1998, cities had three sources of revenue: property tax, sales tax and VLF revenue. VLF originated as a local property tax levied on vehicles until 1935, when the state standardized its collection. VLF was subsequently allocated to cities on a per-capita basis, which meant that cities received increased shares of VLF revenue when they annexed inhabited areas. New cities that incorporated also received an allocation of VLF according to population.

Because 1998 was a good budget year for the state, legislators became enamored with the idea of “cutting the car tax” from 2 percent to 0.65 percent with promises to use shares of property tax from schools to backfill local agencies for their losses.

That commitment lasted only briefly. As state budget difficulties returned in the early 2000s, legislators questioned the backfill to local agencies and balked at the notion of allowing the triggers to be pulled that would allow VLF to be collected at its previous level of 2 percent. In 2004, this uncertainty was resolved with the VLF-Property Tax Swap articulated in Proposition 1A of 2004. The swap allowed all cities and counties in existence at that time to permanently swap dollar-for-dollar the amounts owed to them as VLF backfill for increased shares of local property tax for schools. The League had advocated for the swap to also address future incorporations and annexations, but that fix did not make it into the final package.

Although the swap kept whole all cities and counties in existence in 2004, the policy issue of how to address future incorporations or inhabited annexations was unresolved — the swap lacked any provision to address future incorporations or annexations. VLF had been previously allocated to cities on a per-capita basis, which meant that as new cities incorporated or otherwise added population, they received increased shares of this pool of funds. These allocations also served as an incentive for smart growth, because accommodating more people in a city meant additional revenue.

Although cities would have preferred having the issue addressed in the swap, this failed to materialize. As an alternative, the League worked with then-Assembly Member John Laird to fashion AB 1602 (Chapter 556, Statutes of 2006), which addressed this problem by providing cities that annexed inhabited areas and newly incorporated cities with permanent increased shares of a small pool of remaining VLF. The four cities in Riverside County — Eastvale, Wildomar, Menifee and Jurupa Valley — had incorporated based on the assumption that they could rely on these revenues. In addition, these revenues served as an incentive for cities to annex inhabited unincorporated areas. Fontana, San José, Chico and many other cities annexed areas and relied on these revenues to assist with serving the additional population.

But in 2011, during another state budget crisis, the Legislature passed SB 89 and swept away all of the remaining VLF funds as part of a budget solution.

In 2017, SB 130 resolved the problem that SB 89 created for the four Riverside County cities by providing the cities with shares of property tax to offset the amount of VLF revenue they would have received. In future years, the amount will be adjusted according to the same rules applied to other cities in the VLF-property tax swap. In short, the four Riverside County cities will now be treated equally with all other cities. Although SB 130 does not resolve issues associated with future incorporations and annexations, it provides the legislative template to address these issues in the future.

It is time for the Legislature to provide a financial fix for city annexations (harmed by SB 89 of 2011) similar to the one provided to the four recently incorporated cities via the passage of SB 130. The cost of an annexation fix would be approximately $4.3 million annually, about one-fourth of the $19 million cost attributed to SB 130. Not only would fixing annexations be the right thing to do for the affected cities, but it would also restore previous incentives that support state policies advocating for compact growth and the related benefits that occur with service consolidation to support the needs of an increasing population.

The League appreciates the work of Assembly Member Reyes on AB 2268 and looks forward to working with the affected cities to ensure they are aware of the bill and supporting efforts to pass this important legislation.