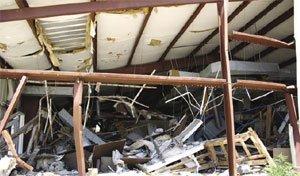 As a native Californian, I’m accustomed to the aftermath of earthquakes. I have seen my own belongings cracked and smashed, and concrete turned to powder by the Northridge quake. A friend saw her kitchen knives fly out of their storage block and embed themselves in the opposite wall during the Landers quake in 1992, which had a magnitude of 7.3 on the Richter scale. Despite these experiences, I was not prepared for the devastation I saw along the Gulf Coast in May 2006, when I joined a group of Rotarians on a relief work trip to the town of Pass Christian, Mississippi.

In addition to helping build a community center, I learned valuable lessons for city officials that apply in any type of natural disaster, from the practical need for chainsaws to a more philosophical approach to leadership.

Southern Mississippi took the brunt of Hurricane Katrina in August 2005. When the storm hit that area, it brought torrential rain and winds exceeding 120 miles per hour. The storm surge off the gulf was 30 feet and flooded the area’s bayous and rivers. Deadly water poured in from all directions, not just the sea.

Locals in Pass Christian reported that 85 percent of the town’s buildings were gone — sucked out to sea when the storm surge receded. Flooding and winds seriously damaged the remaining 15 percent. Bearing in mind the Rotary motto “Service above self,” John Malone of the Yucaipa Rotary Club organized 20 Rotarians and volunteers from inland Southern California to work in Pass Christian for a week this past spring. We pitched in to create a new community center where the Rotary Club, Boy Scouts, other organizations and even the city council can meet for business, fellowship or recreation.

With $50,000 donated by Rotarians, we purchased a used, double-wide classroom trailer and all the materials needed to renovate it. We did everything from chipping away the old linoleum to building stairs and an access ramp. In addition to helping with manual labor, we took the time to tour the area, from New Orleans on the west to Gulfport on the east, talking with residents and city officials alike about the lessons municipalities learned from Hurricane Katrina.

Throwing Out the Rule Book

Gulfport Mayor Brent Warr had been on the job only six weeks when Katrina hit. His best advice for elected officials leading the way after a disaster was, “Throw out the rule book.” For example, many city employees reported to duty after the storm, but after working long shifts they needed to check on their families. The mayor wanted them to do that and then return to work, but there were no functioning gas stations to fuel private vehicles with enough gasoline for the return trip. The rule book says that the city’s gasoline cannot be used in private vehicles, but when the gas became the difference between having city employees return or losing them, the rule book had to go. Equally important, according to Mayor Warr, was knowing when to bring the rules back into full force. Neither of these decisions can be written in emergency preparedness handbooks; they are choices made by leaders. That is the essence of what we took away from the gulf: Leaders must make choices and take action in a crisis or risk the future and recovery of those they serve.

Katrina underscored the deficiencies in many municipal rule books. For example, some police and fire officials we spoke with acknowledged that their departments had extensive disaster plans but they had never coordinated them with the public works departments. It seemed that public works folks had always done their jobs well but quietly so their integral role in emergency response had simply been overlooked — but no more. They were praised right and left for leading the charge in restoring services, access and as much normalcy as possible. I know that in Fontana, our public works staff never fails to impress me with their hard work, creativity and problem-solving ability, and they are integral in our emergency planning and response.

Just a Few of the Lessons Learned

There were several very practical lessons learned from Katrina that can be incorporated into city rule books now:

One of the more dismaying discoveries made in Gulfport was that when evacuations occur and businesses are boarded up, the underground economy closes down as well. That meant that drug addicts did not have access to their dealers and when they needed a fix, they began looting pharmacies and drug stores. After that, they turned their attention to the hospital emergency rooms. Consequently, police officers had to be taken off city streets and out of communities, and sent to stand guard in ERs.

The Disaster Lives On

The Police Department in Pass Christian needed our help, too. While it received replacement patrol cars, weapons and the like from throughout the country following Katrina, the officers there still have great needs nine months later because the city is simply out of money. With generous personal donations from the staff of the Fontana Police Department, Fontana Police Captain Rodney Jones was able to deliver more than $5,000 worth of practical equipment for the officers of Pass Christian: reams of paper, pens, cameras with film and fingerprint kits.

We were also surprised to see tax records and other vital city documents lying around the old city hall. The papers and books were moldy and waterlogged, and records that normally were stored under lock and key are now just lying out in the open (see photo). City officials said that recovering them had not yet made it to the top of the to-do list nine months later. When you have open sewers and no tax base, your priorities as a city leader are different than they are in good times.

Recovery takes a long time; expectations have to be adjusted and leaders must lead. Media coverage of the devastation has subsided, and many people I talk to here in California believe that the Gulf Coast has recovered. However, the damage is too extensive and widespread for the area to bounce back quickly. The people and cities of the Gulf Coast still need our help, our donations and our prayers. In turn, we can learn lessons from their experiences that will serve our communities when disaster strikes us.