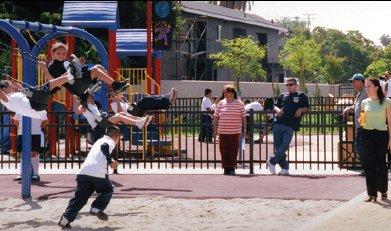 La Mesa has a population just under 57,000, but sharing borders with the City of San Diego and a heavily populated portion of unincorporated San Diego County helps this small city think globally.

Experts indicate that this generation of children may not live as long as their parents — due to complications from obesity. The California Center for Public Health Advocacy reports $41 billion was spent during 2006 for medical care, worker’s compensation and lost productivity related to obesity and inactivity. What’s perhaps most disturbing about these numbers is that obesity is largely preventable. La Mesa City Manager Sandra Kerl says, “The challenge is to create everyday opportunities that promote physical activity and good nutrition and provide encouragement and incentives to embrace habits that lead to lifelong health and wellness.”

Momentum built quickly during 2006: San Diego County issued a Call to Action for Childhood Obesity in January that encouraged cities to create strategies for preventing childhood obesity; federal mandates directed schools to establish wellness policies; and LMSVSD and GUHSD approved such policies. At its annual conference, the League of California Cities approved a policy resolution encouraging health and wellness in cities. La Mesa’s task force presented its findings in July 2006 to the city council, which approved adoption of the La Mesa Community Wellness Program. Its components include:

As part of the parks component, La Mesa designated city parks as smoke-free environments. The city is conducting community workshops as part of an effort to renovate La Mesa’s oldest park and enhance amenities, increase attendance and reduce undesirable activities.

In a related effort, San Diego County invited La Mesa to participate in a community asset-mapping project known as CX3 — Communities of Excellence in Nutrition, Physical Activity and Obesity Prevention. The project involved local students in mapping obstacles to safe travel, availability of fresh produce and access to public transit and park facilities. The information was used to identify community strengths and gaps and develop local action plans for policy, systems and environmental change. In 2008, the Governor’s Council on Physical Fitness gave La Mesa a Spotlight Award for its CX3 work.

Data collected during the CX3 project were also used to advocate for changes to improve walkability and encourage students to walk to school, as part of the city’s Walkability Plan. This study helped position the city to secure three Safe Routes to School grants: one to install sidewalks along a common elementary school route; one for sidewalk and intersection improvements near a high school; and a non-infrastructure grant to develop a multifaceted walking incentive program at six elementary and two middle schools. A new wellness element is being added to the city’s General Plan update currently under way.

La Mesa and LMSVSD joined 13 other cities in 2007 for the National League of Cities’ and American Association of School Administrators’ two-day Leadership Academy on Wellness and won one of six technical assistance grants awarded nationwide to develop cohesive strategies incorporating wellness efforts into a consolidated work plan. As part of this effort, the city and school district collaborated with agencies in Jackson, Tenn., exploring strategies to create healthful community environments that influence behavior at an early age.

The lessons learned in these successful collaborations positioned the city and school district to receive an 18-month, $177,000 planning grant in 2008 from The California Endowment. This grant launched the next phase of work toward a shared vision of wellness in La Mesa and Spring Valley, a neighboring unincorporated community also containing LMSVSD campuses. A team that included city and LMSVSD staff, elected officials and participants in the earlier task force compiled policy recommendations for joint programs and presented these recommendations to regional governing bodies.

“The Ready, Set, Live Well initiative provides the city and school district an opportunity to develop a coordinated road map that supports positive changes in the social and physical environments where our students, families and residents learn and live,” says Yvonne Garrett, director of community services and the driving force behind the city’s wellness efforts. A policy team crafted a strategic vision and compiled guidelines for future program development, building on work already accomplished. The initiative has now established working teams to develop individual programs.