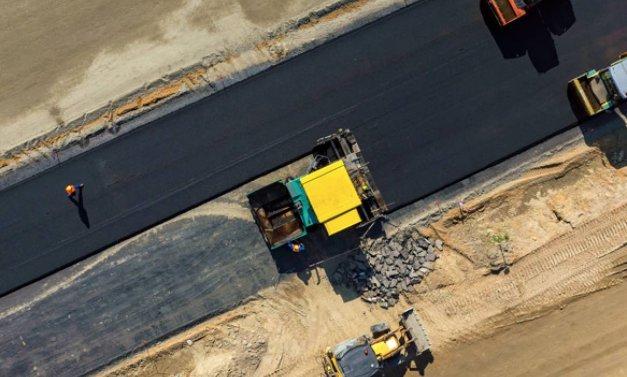 Meghan McKelvey, department and member services manager for the League, and Eva Spiegel, director of communications for the League, contributed to this article. To learn more about the awards program, visit www.savecaliforniastreets.org.

The County Engineers Association of California (CEAC) and the League’s Public Works Officers’ Institute announced the winners of the 2017 Outstanding Local Streets and Roads Project Awards at their annual spring meeting in San Diego.

The awards program recognized counties and three cities for their extraordinary efforts to preserve and improve the quality of the local streets and roads system. Imperial County was the overall winner. The City of Commerce, the Town of Windsor, the City of San Diego and Los Angeles County also won in specific categories.

Sponsored by the League, California State Association of Counties and CEAC, the Outstanding Local Streets and Roads Project Awards program features best practices that reduce waste and costs and can be replicated by other jurisdictions. The awards also highlight cities and counties that promote sustainability in the local transportation system.

“Local governments really do have this ‘can-do’ spirit, especially when facing difficult conditions,” said Jay Spurgin, president of the League’s Public Works Department and the public works director for the City of Thousand Oaks. “We see it on a daily basis, but I don’t think the general public recognizes it. So it’s good to celebrate some of these achievements in a more public fashion.”

“This year, with all the storm damage to our local streets and roads, it’s even more important to recognize the need to provide adequate resources for our transportation projects, as well as the value that these projects provide to our local communities,” said John Presleigh, president of CEAC and public works director for Santa Cruz County. “The public and policy-makers need to know that when we have the resources, we can provide the highest level of service on our streets and roadway systems for our local communities.”

Imperial County is committed to improving the overall quality of its road system in the most cost-effective, environmentally beneficial and safest manner. In keeping with the county’s commitment, the 2.8-mile Salton City Roadways project employed a sustainable engineering approach that strengthens or recycles existing on-site materials instead of the more costly and more environmentally detrimental “remove and replace” construction method.

This was not a traditional pavement rehabilitation design and construction project. Eastern Avenue is a major corridor in the City of Commerce with heavy vehicular and truck traffic that connects with the Interstate 5 freeway. The work on Eastern Avenue involved extensive coordination with local businesses to ensure the roadway remained open and minimized the impact on the community.

The project utilized reclaimed asphalt concrete pavement, a cost-effective approach to conventional rehabilitation, which reduced the cost by 50 percent (from $2.3 million to $1.15 million). The city used the savings for additional street rehabilitation projects to improve the quality of life for its residents.

Traditional asphalt is not biodegradable material, and nonrenewable resources must be used to generate new asphalt. Commerce chose a material mix that minimizes waste by repurposing old asphalt, which has the advantages of having already been paid for and being in place. In addition, this approach is sustainable — it significantly reduces the number of trucks needed to transport materials. The material mix also provides excellent bonding qualities and increases the overall quality and durability of the roadway.

The construction schedule was accelerated, despite cold weather and rain, to ensure that residents were not affected during the holiday season between Thanksgiving and New Year’s Day. Commerce will use a similar approach for future projects.

Oakmont Senior Living, the developer of Bell Village retirement community, initiated the Old Redwood Highway improvement project, which is a model of a successful public-private partnership with benefits for the greater local community. Oakmont’s development project comprised both commercial and residential components, and the conditions for the project included making improvements along the frontage of its property on the Old Redwood Highway. As part of the planning process with the Town of Windsor, Oakmont agreed to make improvements on both sides of the highway in exchange for reimbursement in the form of development impact fee credits.

Prior to the project, the Old Redwood Highway consisted of a two-lane road with no sidewalks, intermittent or discontinuous bike lanes, minimal street lighting and no marked street crossings at intersections.

Activated in summer 2016, Mira Mesa Phase I Adaptive Traffic Control System is the City of San Diego’s most complex system deployment designed to improve traffic flow, reduce travel times, enhance safety in a traffic-congested area and reduce greenhouse gas emissions. The city was already using the traffic control system at nine intersections on Lusk Boulevard, where the technology reduced travel times and fuel consumption by 24 percent and stops by 61 percent. These results led the city to install the adaptive traffic control system at 11 more intersections, including three controlled by Caltrans, for the Mira Mesa Phase I project.

The Mira Mesa Phase I system initially created new challenges, including implementing a larger Ethernet network; coordinating with another agency, Caltrans; dealing with higher average daily traffic (ADT) of 42,000 vehicles (compared to Lusk Boulevard with 10,000 ADT); and installing equipment at a high-traffic volume intersection with frequent railroad pre-emptions during the peak hours.

Travel times along two primary commuter routes in the area have improved by over 20 percent, with a reduction in greenhouse gas emissions and fuel consumption. Along Mira Mesa Boulevard, rapid bus routes receive the benefit of the system’s transit signal priority treatment to ensure that these buses are on time.

The Mira Mesa Phase I adaptive system demonstrates the effective use of advanced real-time adaptive traffic control systems in the region and will significantly reduce travel times for thousands of commuters. 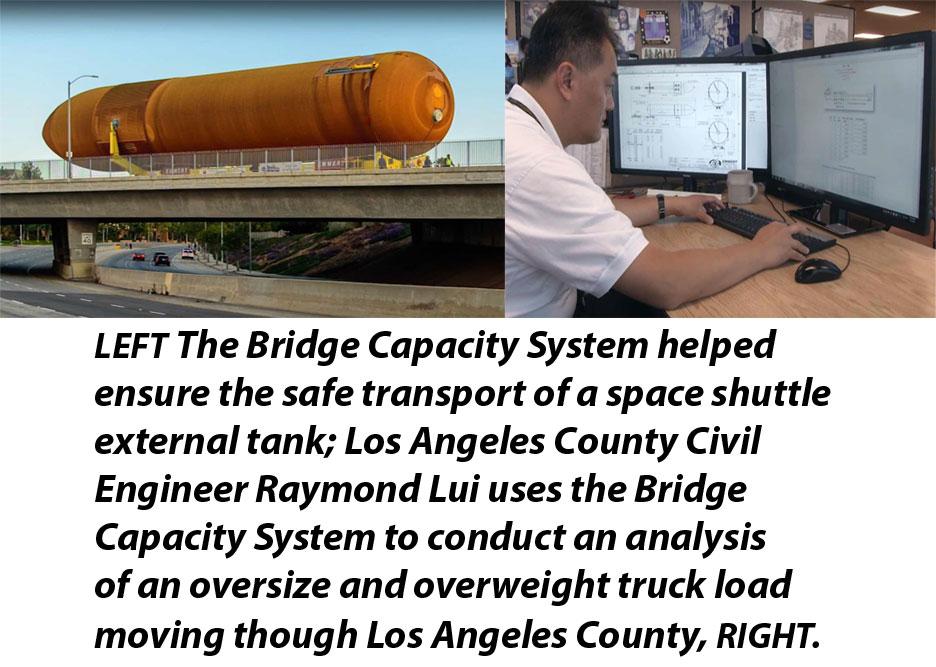 The California Vehicle Code requires an OOT permit for movement of vehicles and loads exceeding statutory size or weight limitations. Many local agencies do not have the technical ability to review overweight vehicle impact on bridges and issue OOT permits without such considerations, which results in a high degree of risk and accelerated degradation of local bridges.

The partnering agencies created the web-based Bridge Capacity System (BCS) software to streamline the review process. BCS provides local regulatory agencies a way to comply with OOT permit requirements that protect existing bridges, ensure public safety and improve the sustainability of local bridges. Its functionality can verify inputted weights of a permit vehicle against the load carrying capacity of all bridges on a route and check bridge clearances to prevent truck collisions with superstructures. The use of geographic information system (GIS) layers of bridge data and street maps eliminates the need for tedious calculations, manual map review and the use of bridge data tables. Staff with any level of engineering experience can use the BCS to conduct a highly technical review quickly and effectively.

The Department of Public Works Structures Section uses the BCS to aid in the permitting process of approximately 40 overload permits per year that exceed the 250,000-pound weight limit. The program also collects data about the most frequently crossed bridges, which provides analysis for appropriate mitigation and funding needs for future bridge maintenance. The program includes data for about 11,000 local agency bridges throughout 58 counties and 482 municipalities in California.

Does Your City Have an Innovative Project?

The Outstanding Local Streets and Roads Project Awards program is conducted annually. If your city has an innovative project underway, consider submitting it for 2018. More information about the awards program is available at www.savecaliforniastreets.org.

The following public agencies were finalists in the 2017 awards program.