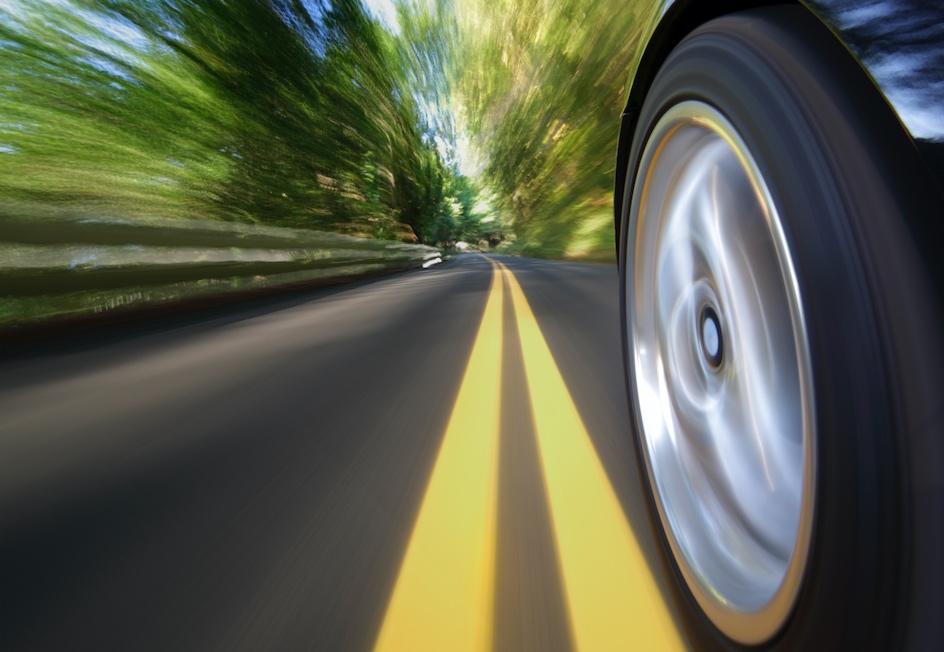 Meghan McKelvey, manager of department and member services for the League, and Eva Spiegel, director of communications for the League, contributed to this article. To learn more about the awards program, visit www.savecaliforniastreets.org.

The County Engineers Association of California (CEAC) and the League’s Public Works Officers’ Department announced the winners of the 2018 Outstanding Local Streets and Roads Project Awards at their annual spring meeting in Monterey. The awards highlight local governments’ creativity and use of the latest techniques in road construction and repair to preserve and protect the public investment in local streets, roads and bridges.

“People expect their local governments to wisely invest their tax dollars in their communities and implement cutting-edge solutions in delivering local services,” said Charles Herbertson, president of the League’s Public Works Department and director of public works for Culver City. “The projects receiving awards show the ways in which cities and counties can deliver much-needed transportation improvements that are cost effective and environmentally sound and help make our streets, roads and bridges safer.”

“We’re recognizing five winning projects and several more finalists in each category,” said Jeff Pratt, president of CEAC and public works director for Ventura County. “Each award highlights how local governments are implementing new and better ways to deliver projects on time, on budget and with as little disruption to the community as possible. These amount to a best practices manual for local transportation improvements.

Miller Avenue functions as a central corridor serving the circulation, commerce and recreation needs of Mill Valley’s residents and visitors. The corridor was established in tandem with the railroad in 1889 and eventually incorporated median parking to accommodate cars and trains.

The Miller Avenue Streetscape Plan incorporates the street’s first comprehensive design with the primary goal of creating a safe and efficient multimodal corridor consistent with the complete streets principles of design, including features to accommodate all users — vehicles, transit, bicycles and pedestrians. The plan also improved the underground and roadway infrastructure, preserved and enhanced the corridor experience with new drought-resistant landscaping and rain gardens to reduce peak storm discharge into nearby creeks, maintained Mill Valley’s cultural features and improved the corridor’s overall infrastructure.

A 1,700-foot stretch of the project eliminated frontage roads and realigned the street to accommodate parking, travel lanes, accessible sidewalks and buffered bike lanes. Due to the large amount of reconstruction required, combined with elevation changes and difficult soil conditions, the roadway construction utilized full depth reclamation, pulverizing 18 inches of the underlying roadway that was reused for ground materials and overlaid with new asphalt. Full depth reclamation is 50 percent less expensive than traditional road repair methods and reduces excavation and the import and export of materials. Although rarely implemented in an urban setting, the city successfully applied this method of road reconstruction, which reduced both the number of truck trips hauling materials in and out and the cost of replacing the pavement. Repaving was done at night to minimize disruption to the community and the impact on local businesses; this also cut three to four weeks off the time needed to complete the project. 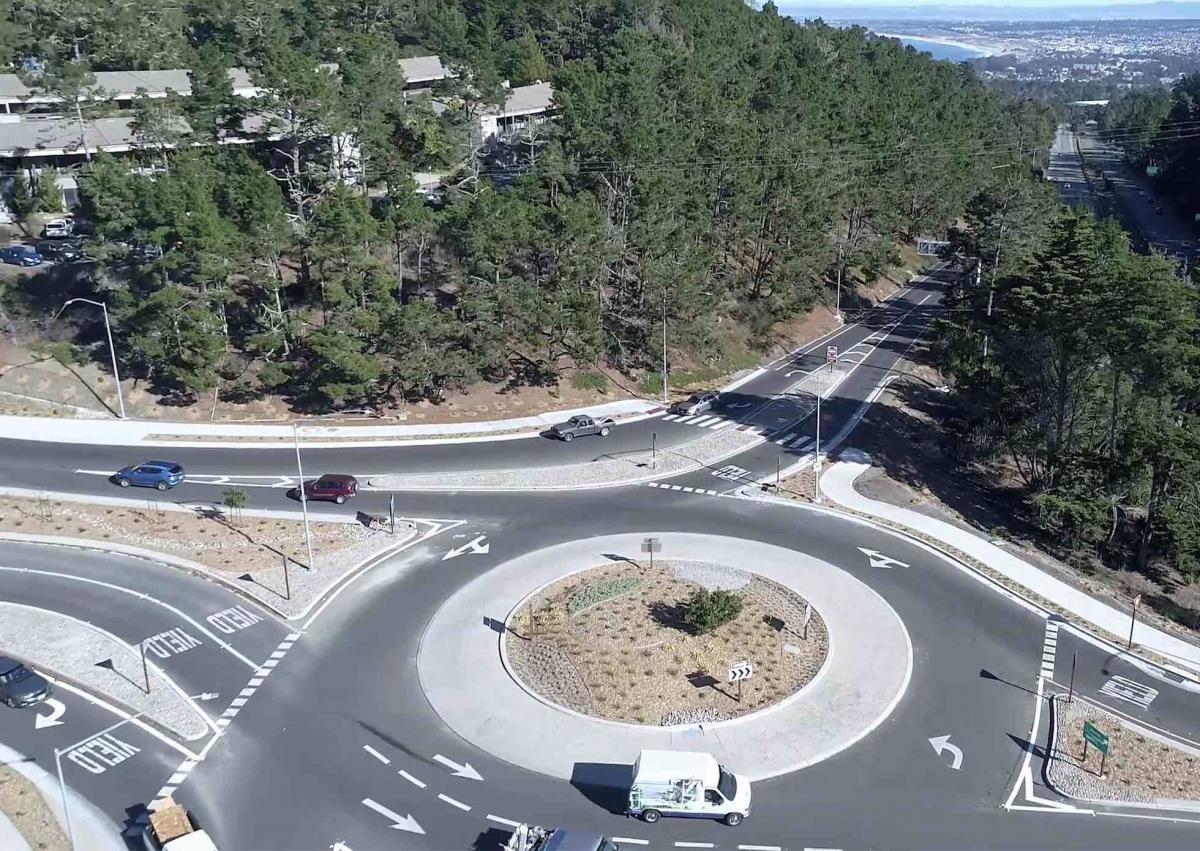 The Holman Highway 68 Roundabout was designed to relieve congestion at the busy intersection of Holman Highway 68, southbound Highway 1 ramps and 17 Mile Drive near the entrance to Pebble Beach and the area’s only community hospital. The selected improvements feature two closely spaced roundabouts, one of which is a teardrop roundabout located at the access point to 17 Mile Drive. Monterey’s roundabout solution mitigated congestion and eliminated traffic signals and stop signs to reduce vehicle idling times and greenhouse gas emissions. It also improved response times for first responders and access to the community hospital and local Fire Department. In addition, it helped protect the surrounding Monterey Forest and enhanced access to the existing scenic corridor.

The project was one of the first in the state to use the intersection control evaluation (ICE) process to help evaluate and identify the best solution for intersections located in the state right of way. The process demonstrates the safety and operational performance advantages of roundabout control over signal control by providing a side-by-side comparison. It also establishes a streamlined Caltrans approval process for consensus building. The ICE performance measure matrix made it easier to educate policymakers and the public on the roundabout as the key component of an unprecedented solution, leading to broad local support and full project funding. Leveraging the greater capacity of the roundabouts, the city ultimately replaced a previously approved widening project of State Route 68 that included a bridge replacement and signalized intersection. The project cost approximately $10.7 million.

City of Santa Clarita, Dynamic Lane Change. The intersection of Soledad Canyon Road at Sierra Highway carries approximately 80,000 vehicles daily. To address congestion and queuing at one of Santa Clarita’s busiest intersections during the afternoon peak, the city implemented a dynamic lane that decreased queues by almost 800 feet and increased throughput by almost 10 percent. This also reduced greenhouse gas emissions and the amount of time residents spend in traffic. The project features a series of dynamic message signs to inform travelers when the lane is exclusively for right turns and when it is a right/through lane. Santa Clarita used early community outreach that explained the new concept on flyers, social media, print publications and the city’s website. Innovative data collection techniques were used to perform the before and after analysis. Drone videos survey the queuing at the intersection and observe the project’s results. Real-time video analytics collect data on specific performance measures to evaluate queuing and lane utilization.

City and County of San Francisco, 9th Street and Division Street Bike and Pedestrian Improvements. In 2014, San Francisco adopted Vision Zero, a road safety policy to increase safety and eliminate all traffic fatalities by 2024. It promotes a sustainable transportation system. In the SoMa district, 9th Street and Division Street is one of the higher risk intersections. Part of a larger well-used bicycle facility on Division Street, 10 of the 12 collisions on the street between 2008 and 2013 involved bikes where vehicles made right turns. The San Francisco Municipal Transportation Agency and San Francisco Public Works proposed a system to simplify traffic flow and provide a physical barrier between cyclists and pedestrians and moving vehicles. Improvements included raised crossings, corner safety islands with new curbs, painted bike lanes and pedestrian safety zones, a parking protected bikeway, a 13-foot-wide pedestrian sidewalk and the conversion of a one-way street to a two-way street. 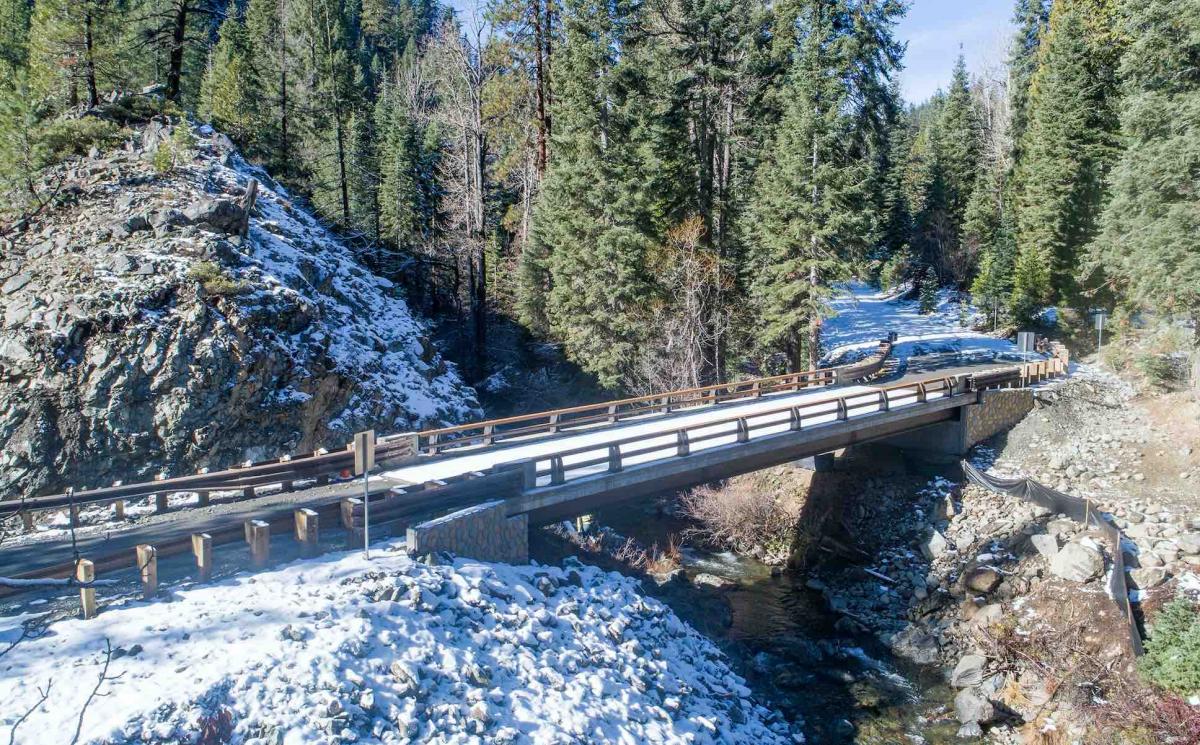 Trinity County entered into an agreement with Central Federal Lands Highway Division to replace five county-owned bridges using design-build methods. The bridges were identified as structurally deficient or functionally obsolete and approved by Caltrans and the Federal Highway Administration (FHWA) for replacement under the FHWA Highway Bridge Program.

The county wanted to accelerate the project, augment staff duties and use “every day counts” design and construction methods. Using precast abutments and deck panels reduced construction time to as little as two weeks per bridge. The design-build team was hired to design, construct and acquire the necessary rights of way. The pilot program cost $7.9 million, coming in at 10 percent below budget. It took 12 months to design the project, acquire rights of way and complete construction.

County of San Bernardino, U.S. Route 66 Bridge Preservation Program. The National Trails Highway (NTH), also known as Historic Route 66, was established as one of America’s first transcontinental highways. San Bernardino County is responsible for maintaining NTH between the cities of Barstow and Needles. Built between 1929 and 1931, the corridor is the longest remaining original section of Route 66 and contains 127 timber bridges. This section is critical to the economic vitality of an underserved rural region larger than some states; it provides the only bypass to Interstate 40 and is deemed eligible for the National Register of Historic Places. The county embarked on an ambitious program to rehabilitate or replace structurally deficient historic timber bridges along a 111-mile stretch of this corridor. It successfully secured funding for the first priority group of nine bridges and is on track to secure funding for additional groups.

Yuba County, Alleghany Road Over Oregon Creek Bridge Rehabilitation. This project involved rehabilitating the historic wooden-covered truss bridge in the Tahoe National Forest in northern Yuba County. The bridge is listed by Caltrans as a Category 1 historic bridge. Though it is also listed on the National Register of Historic Places, the bridge was closed to vehicular traffic due to the possibility of catastrophic collapse. The project was necessary to improve public safety by providing a safe river crossing for all passenger-sized vehicles and small U.S. Forest Service fire trucks. Rehabilitation of this nearly 150-year-old covered bridge created the opportunity to sustainably maintain its historical significance by reusing and rehabilitating some original materials.

The City of Orinda needed to repair 92.7 miles of failed pavement. Using full depth reclamation, the city implemented the best and most sustainable technology available. When complete, the project will provide a perpetual pavement section that needs only the wearing surface maintained and does not require new aggregates or removal of the old material.

Full depth reclamation projects reduce energy consumption by 28 percent and greenhouse gas emissions by an average of 48 percent. Funded by residents through Measure J and L, the city’s pavement rehabilitation program completed reconstruction of 63 failed residential roads, repairing a total of 11.4 lane-miles in 2017.

Orinda became the first San Francisco Bay Area public agency to embark on such an aggressive road rehabilitation program using full depth reclamation. The city anticipates that using this sustainable process will raise its pavement condition index (PCI) rating from 41 to 88 — on a scale of 0 (failed) to 100 (excellent) — by 2019.

Los Angeles County, Susana Road Reconstruction Project. Since 2008, Los Angeles County has used sustainable pavement treatments to preserve and improve the quality of its roads in a cost-effective and environmentally responsible way. Limited resources and the state mandate to reduce greenhouse gas emissions under AB 32, the Global Warming Solutions Act of 2006, served as the motivation underlying the county’s sustainable approach. Susana Road is located in an industrial section of the unincorporated community of Rancho Dominguez. The 2-mile-long arterial road was in poor condition due to significant heavy truck traffic. The reconstruction project includes preserving roads in good condition first, using recycled materials in pavement treatments and reusing materials in place when reconstructing roads. The county estimated that using this sustainable reconstruction method saves $3.2 million and achieves significant environmental benefits. 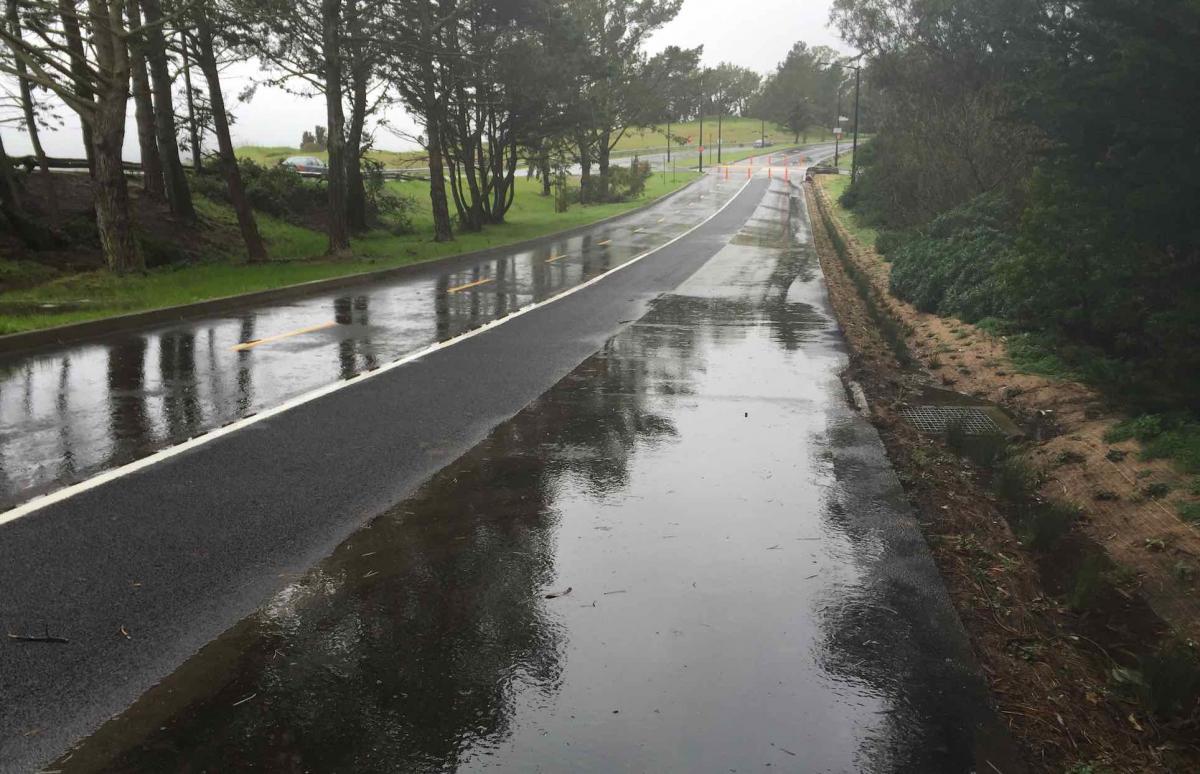 Mansell Street was developed in the 1950s as part of a never-completed crosstown freeway and primarily served motorized vehicles. The traffic lane widths and three different posted speed limits encouraged speeding. Pedestrians had to walk on the street or climb over a guard rail and walk along an informal path to access various park facilities or to commute between neighborhoods. Cyclists also had to share the road with vehicles traveling at speeds up to 45 miles per hour, and public transit users had to wait on the street for a bus.

The project addressed pedestrian safety and bicycle access by reducing the number of vehicular lanes from four to two with one lane each direction, separating vehicular traffic and creating a multi-use path. In several sections, the project incorporated the construction of a sidewalk, bicycle facilities, safety improvements including raised crosswalks and flashing beacons at some intersections, and a corner bulb-out.

Street-level lighting, trees and landscaping and site furnishings were added to make this a complete streets project. In addition, the jogging path was paved with pervious asphalt to help reduce runoff and to keep the path dry for runners during wet weather.