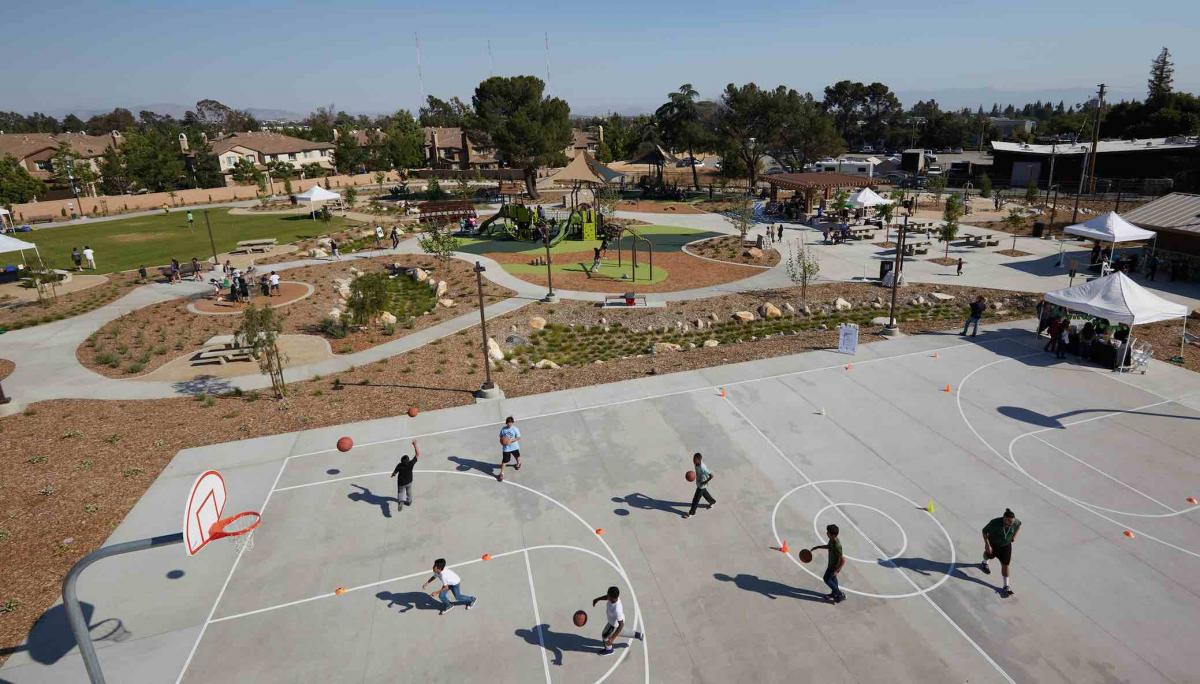 Residents in the southwest portion of Rancho Cucamonga (pop. 177,324), a Southern California community located 40 miles east of Los Angeles, face many challenges to accessing healthy recreation and play areas. In this older area of town, some streets lack curbs, sidewalks or bike lanes, making it unsafe for children to walk or bike to a park.

In 2005, the city’s redevelopment agency purchased a parcel of land specifically for building a neighborhood park for southwest Rancho Cucamonga residents. “Developing the proposed park in an area considered a ‘park desert’ was a long-term goal of the city council,” says Mayor L. Dennis Michael.

The parcel comprised a flat, open area with untended landscaping and vacant bungalows. On its north boundary was a residential parcel known for illegal drug activity. The area was an eyesore for residents and had been fenced for security purposes.

In fall 2009, city staff applied for a Proposition 84 (of 2006) grant. It was an ideal opportunity for staff and the city council to collaborate with partners, community leaders and neighborhood families to design a park with the desired features and amenities and to respond to community needs.

Early community engagement activities included a needs assessment mailed to all residents in the project area. The city conducted community input forums at convenient locations, such as the local elementary school and senior mobile home park clubhouse. To give participants a visual understanding of the proposed park site, design workshops were conducted near the site. The forums were scheduled at various days and times to accommodate residents’ schedules. The workshops included meals, child care and art activities for the youngest attendees.

Residents expressed what features they hoped for in a healthy, thriving neighborhood park during the eight community meetings and two community input exercises. The features most often requested included:

These elements provided the foundation of Los Amigos Park’s design. 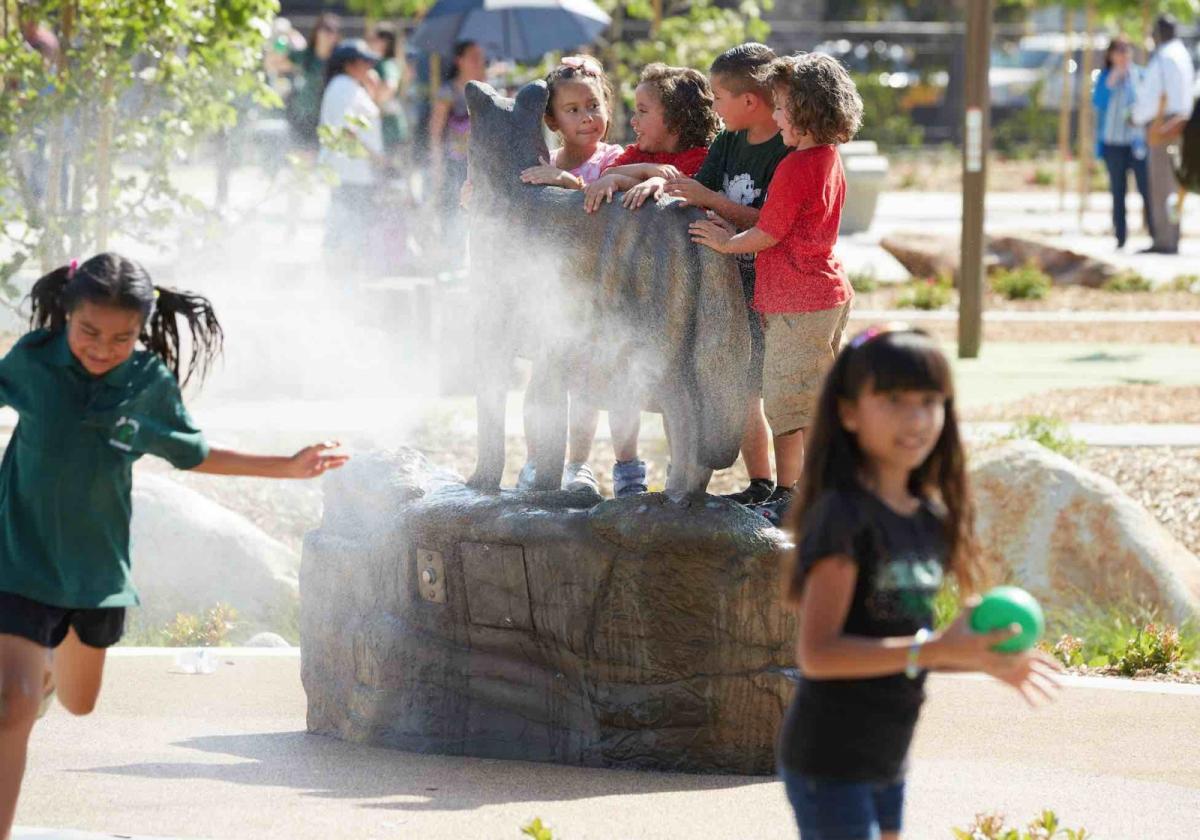 In 2011, the state Department of Parks and Recreation awarded Rancho Cucamonga a Prop. 84 grant of $3.9 million. City Manager John Gillison says, “The state indicated that our application succeeded due to the extensive community input and the city’s outreach plan.” But the dissolution of the local redevelopment agency — which owned the parcel project — delayed the project. Following a lengthy State of California approval process, the property title was transferred from the successor agency to the city in 2014.

“After the delay, the city’s Community Services Department staff wanted to re-engage with the community members who were previously invested in bringing the park to life,” says project manager Christen Mitchell, a management analyst for the department. City staff hosted a community meeting at Los Amigos Elementary School, where local residents received an update on the park design and staff led a park-naming exercise. Neighborhood residents chose Los Amigos Park as the name.

Now that the vacant land was set to become a park, the property immediately north of the project site became more attractive to investors. Developers purchased this adjacent land and began building new homes.

Making the Vision a Reality

Park construction commenced in August 2016 and moved forward quickly. Materials salvaged as the land was cleared were saved for reuse; for example, excavated river rock was used as a decorative finish on the shade structure pillars and restroom building. Workers carefully removed the redwood in the existing bungalows so it could be used for the park’s vineyard. 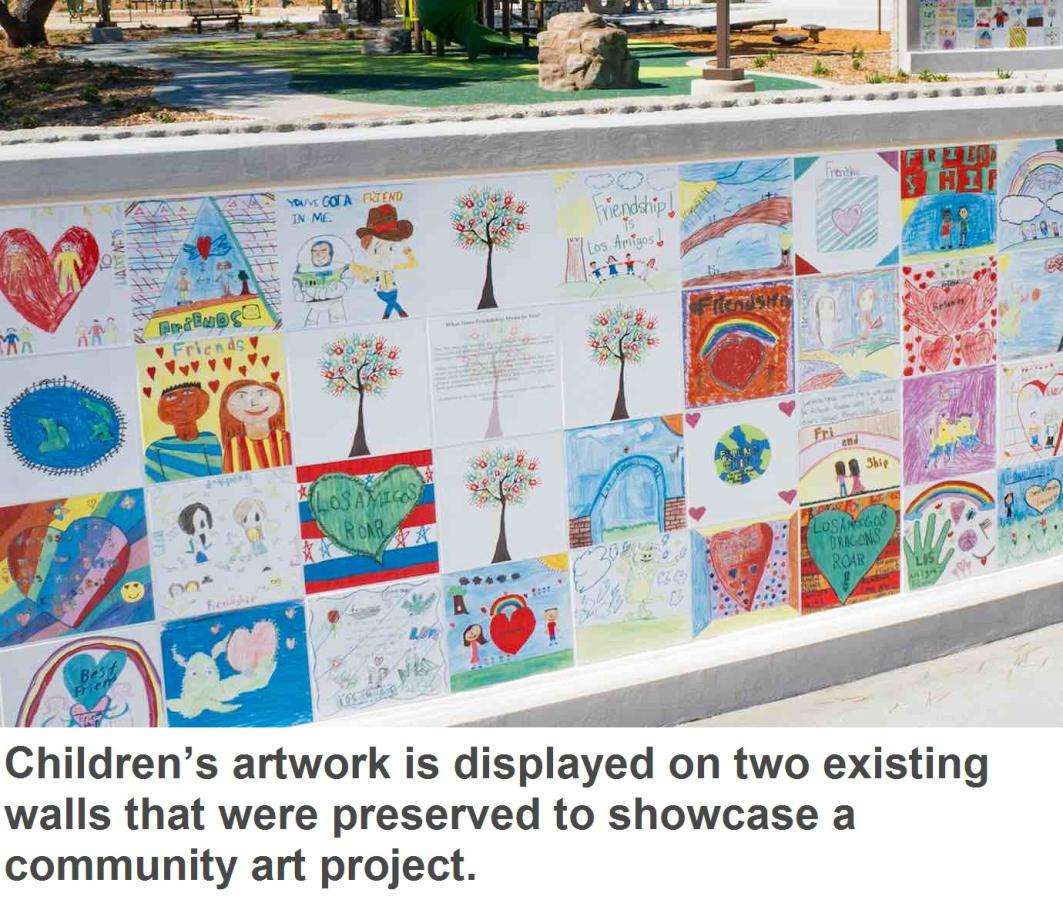 The project reinforced two low stone walls, which were subsequently used to showcase children’s art. Project staff asked the fourth and fifth grade students of Los Amigos Elementary school, “What does friendship mean to you?” and gave the students art supplies to illustrate their answer. Staff uploaded the artwork to a gallery on the city’s website and transformed over 80 pieces of artwork into 12-inch square ceramic tiles, which were mounted on the stone walls at the park.

As the park neared completion, workers added finishing touches to the features requested by residents in the planning process. The vineyard, built with redwood lumber from the bungalows, was planted with native grapes. The skating spot incorporated a wall designed for seating, where family and friends can watch and encourage young skaters. The fitness area, sponsored by a local health care provider, was installed near the playground areas so parents can exercise while watching their children play. Due to severe drought conditions, the water play area was re-evaluated and two on-demand animal-shaped water misters, a raccoon and a coyote, were installed.

Los Amigos Park opened in April 2017. Since then, events including a weekly movie night in the park have been well-attended. Residents are making full use of the park they envisioned, designed and helped bring to life.

Photo credit: Courtesy of the League of California Cities and the Cites of Rancho Cucamonga.