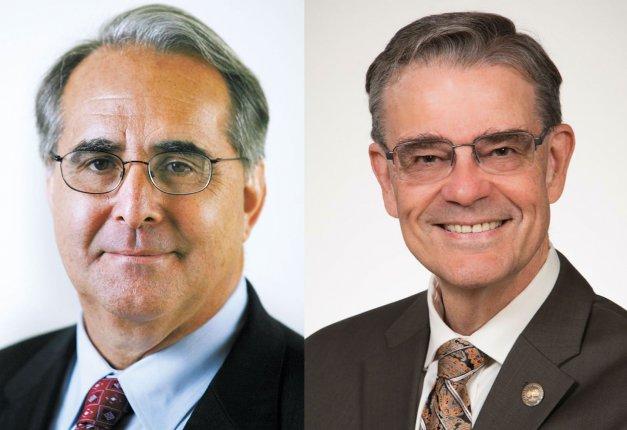 My Friend the Mayor: A Tale of Two Cities

Just as two heads are better than one when it comes to problem-solving, two mayors can serve their communities more effectively when they work together. That’s been the experience of Mayor Steve Martin of Paso Robles and Mayor Tom O’Malley of Atascadero, lifelong friends who lead two neighboring cities in northern San Luis Obispo County. Whether the issue is economic development, managing water resources or collaborating with the many community services groups in both cities, Martin and O’Malley have learned that working together for both cities makes them twice as effective for their constituents.

“We just look at each other and shake our heads in amazement,” says Martin. “Who would have thought we would both be mayors at the same time in neighboring cities? We’ve resolved to work together to benefit both our cities and the other unincorporated communities in our region.” 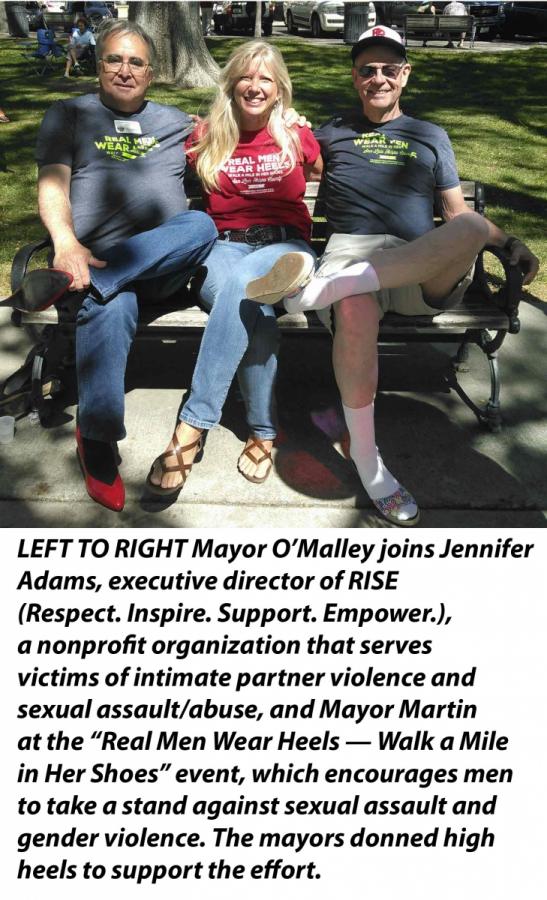 Martin and O’Malley grew up together in Atascadero in the 1960s. They participated in Boy Scouts and band and were friends in high school. After college O’Malley remained in Atascadero and Martin relocated to Paso Robles, about 10 miles north.

O’Malley entered Atascadero public service when he ran for the city council and won in 2002. Since then he has conducted five successful campaigns and served as mayor in 2006 and again in 2011. He ran unopposed as his city’s first directly elected mayor during Atascadero’s centennial in 2013 and has held the position since then.

Today, decades after their high-school friendship, the two mayors find it interesting and fun that they both serve in leadership positions in their respective cities. They refer to themselves as “Dos Alcaldes” (“Two Mayors”). O’Malley and Martin confer regularly on issues related to city services and are often seen together at local and regional committee meetings.

Dealing With the Drought

Water conservation is among the many issues addressed in tandem by Dos Alcaldes. Martin and O’Malley responded to the prolonged drought by encouraging conservation and intercity cooperation to achieve the goals and mandates of the Sustainable Groundwater Management Act. The City of Paso Robles conserved about 500 million gallons of water during the six-month period ending in February 2016. Atascadero, which has a municipal water company, has also aggressively conserved water. The two mayors advocated for cooperation among emerging water management districts and implemented joint council and staff meetings to create a framework for future water management.

“We are managing the perennial water shortage situation, which is an integral feature of this semi-arid area,” says Martin. “We’ve established a diversified portfolio of water resources and continue to develop new sources and increase conservation.”

“Many people commented favorably on our conservation efforts,” says O’Malley. “We recorded a public service announcement from the two mayors urging everyone to conserve water. We received positive feedback, so we’re now recording joint PSAs for other issues.”

Paso Robles, historically an agricultural community featuring dryland grain farming and cattle ranching, has been transformed over the years into a tourist destination with award-winning wineries, a nationally recognized downtown Main Street program and an airport.

“Paso Robles started out as a cowboy town,” says Martin, “and there’s still a lot of that influence here. But we are increasingly becoming a vibrant community with a complex mix of retail, technology and tourism opportunities. We’re working to attract new employment opportunities, and we are rebuilding city services impacted by the Great Recession.”

“Our cities have an amazing sense of community,” says O’Malley. “In the early 1900s entrepreneur E.G. Lewis founded Atascadero as the first planned community in the state. It’s still a beautiful small city with a historic downtown, an accredited zoo and a carefully restored municipal building, which was damaged during the 2003 earthquake. Local volunteers support many of these facilities, including parks and recreational facilities.”

The two cities cooperate in developing their economic bases. Martin and O’Malley started their partnership in this arena more than 10 years ago, when Martin returned to his hometown to work as the executive director of the city’s Main Street organization.

“I was excited to hear that our downtown merchants had chosen my friend to lead their efforts to revitalize our historic downtown,” says O’Malley. “Steve put in a solid decade of effort, and we all benefited before he decided to turn his attention back to Paso Robles.”

“It was a marvelous opportunity to give back to my hometown,” says Martin. “And it reignited my desire to be involved in Paso Robles’ economic development.”

The two mayors participate with their respective chambers of commerce and other business organizations to retain and enhance existing businesses and attract new companies to the area. Their goal is to create a thriving regional economy with a diverse inventory of employment opportunities for all residents.

“It’s refreshing to see two community leaders so attuned to the needs of their constituents,” says Atascadero Chamber of Commerce President Linda Hendy. Paso Robles Chamber of Commerce CEO Gina Fitzpatrick agrees. She says, “They model the type of cooperation that would benefit all levels of government.”

Addressing Homelessness Is a Priority

The issue of homelessness has emerged as a priority for both cities. The City of Atascadero and the City of Paso Robles have supported the El Camino Homeless Organization and its shelter in Atascadero for years. Both mayors have volunteered at the shelter.

“The City of Atascadero has been instrumental in shepherding and funding this very effective and cost-efficient effort to assist the homeless,” says O’Malley.

“Both cities have helped fund this effort over the years,” says Martin. “Last year we held the first Mobile Assistance and Services Addressing Homelessness (MASH) event in our city. Twenty-two social service agencies joined forces in Paso Robles to provide help for homeless individuals who can’t travel easily due to disability or lack of transportation. Most of the county service agencies are 30 miles away, which makes it hard to access services if you are homeless in our cities.”

Like many city officials in California, the two mayors lobby at the state Capitol for local control and their communities. “We cross the aisle when we advocate for our cities,” says O’Malley. “We put political affiliations aside for the most part to show that the most important thing for all elected officials is to get things done for their communities.”

The mayors’ strong partnership benefits everyone in their cities. “We attend fundraisers, regional meetings and League of California Cities functions. We are aligned on a variety of issues,” says Martin. “I don’t hesitate to call on Tom when I need help or advice, and he does the same with me. It provides more perspective on the local and regional nature of the problems we face and often produces solutions that wouldn’t have been possible had we been working on our own.”

“It also provides some much-needed insight,” says O’Malley. “We’re facing similar problems and pressures, and it helps to have someone to bounce ideas off. Because we’ve known each other for so long and live in neighboring cities, we find it easy to confer on the issues. And we enjoy connecting the dots when it comes to bringing people and organizations together.”

O’Malley says people are beginning to recognize the results of Dos Alcaldes working together. “When we attend regional meetings or local celebrations, people can see that both cities benefit from having mayors who are friends with common views and goals,” he says. “We’re both committed to leaving our cities better than we found them.”

“And when we talk about people working together,” says Martin, “we want to lead by example.”