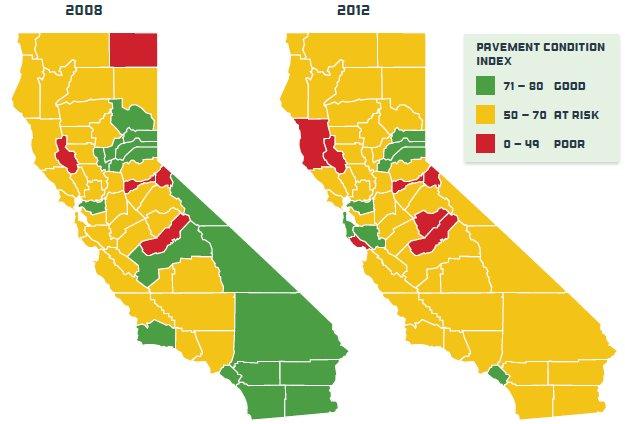 Jennifer Whiting is a legislative representative for the League and can be reached at jwhiting@cacities.org.

California cities and counties own and operate 81 percent of the state’s roads, and most Californians can attest to the fact that the condition of their local streets and roads system is becoming a crisis.

The 2012 California Statewide Local Streets and Roads Needs Assessment, which will be released in March, provides solid evidence of just how serious the situation has become. It also makes clear that unless additional funding is secured, the state’s streets and roads will continue to deteriorate to the point of failure, costing far more to replace in the future.

The study surveyed all 58 counties and 482 cities and covers an exceptional 98 percent of the local streets and roads system. It includes a first time in-depth study of bridge needs as well. The report shows that pavement conditions are deteriorating throughout California, and that while the costs are high for even the most basic repair and maintenance, the price tag for waiting is far higher, from both an economic and a public safety standpoint. Simply put: Pay now — or pay much more later.

The lack of additional investment will result in higher costs for all users of the transportation system. As potholes increase in number and grow deeper, school buses, emergency vehicles and bicyclists will find it more and more challenging to reach their destinations safely and reliably. If bridges fail or must be closed for safety reasons, communities will be affected by long detours and delays. Water quality standards will be compromised. The ability to meet greenhouse gas emissions reduction standards become increasingly difficult as expensive rehabilitation and reconstruction treatments are required.

Ignoring the needs of the local transportation network will only make matters worse. From the time we open our front door in the morning to drive to work, bike to school, walk to the bus station, travel to the grocery store or get to a highway or an airport, we are using the local streets and roads network. Without a reliable system, we cannot meet the goals of safe, sustainable and healthy communities.

The California Statewide Local Streets and Roads Needs Assessment was made possible by contributions from city, county and regional agencies. Nichols Consulting Engineers, Chtd., completed and analyzed the report, which will be available in March at www.SaveCaliforniaStreets.org.