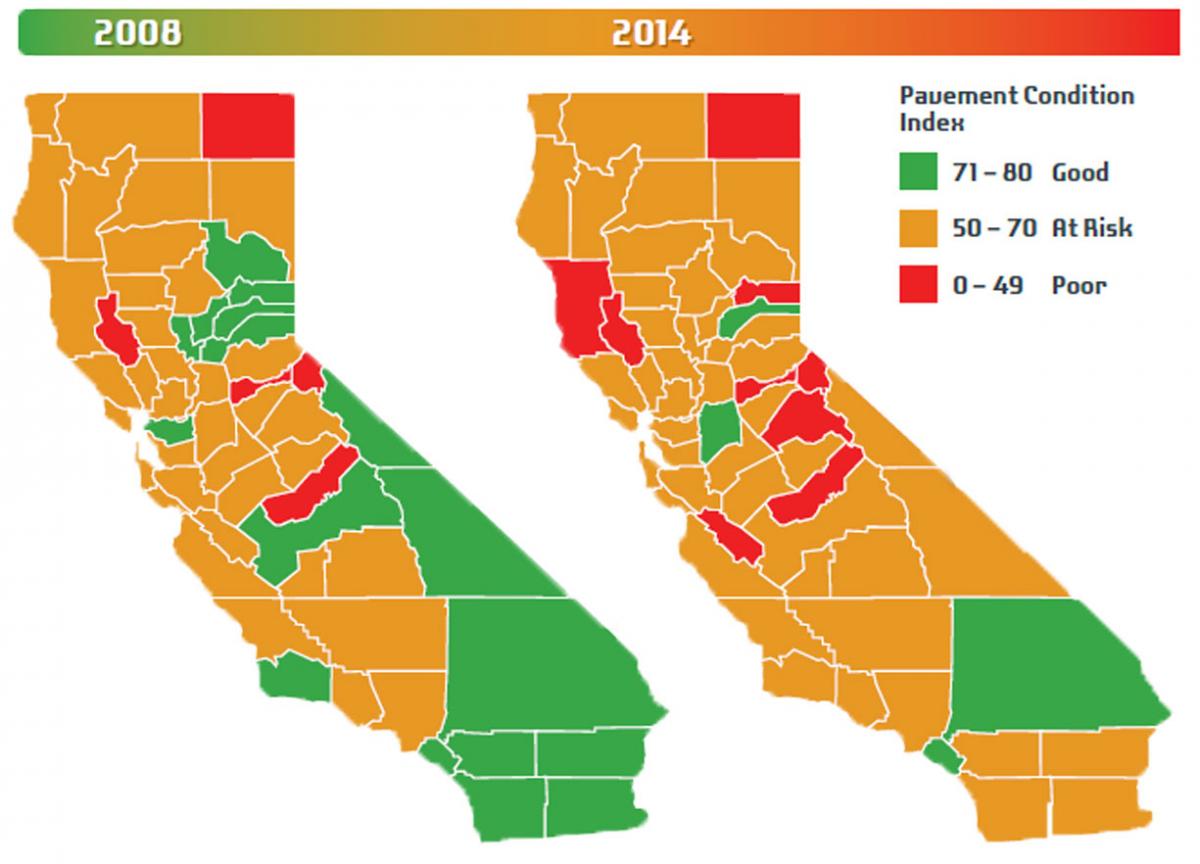 The local streets and roads system comprises more than 80 percent of California roadways and serves pedestrians, cyclists, commuters and others. California must have a solid local road system to meet the demands of residents, visitors and businesses as well as to reduce greenhouse gas emissions. The importance of California’s local streets and roads compelled the League, the California State Association of Counties (CSAC) and the state’s regional transportation planning agencies in 2008 to collaborate on a biennial survey of the system.

Released in October, the 2014 California Statewide Local Streets and Roads Needs Assessment presents alarming findings. The condition of California’s local roadways is on the path to failure. Pavement conditions are declining, and existing funding levels are insufficient to properly fix and/or maintain streets, roads, bridges, sidewalks, storm drains and traffic signs. Deferring this crucial work, the report predicts, will likely double the cost of repairs in the future and impede efforts to reduce greenhouse gas emissions and other air pollutants.

The 2014 report surveyed California’s 58 counties and 482 cities and captured data from more than 99 percent of the state’s local streets and roads.

The California Statewide Local Streets and Roads Needs Assessment uses a scale of zero (failed) to 100 (excellent) to rate the condition of pavement. Conditions have deteriorated since the first survey in 2008, when the statewide average was 68. That number in 2014 dropped to 66, which falls into the at-risk category. Of California’s 58 counties, 54 have streets and roads that are either at risk or ranked in poor condition. In 10 years it is projected that, without greater investment, 25 percent of local streets and roads will be ranked poor — compared with 6 percent today.

The local system will have an estimated $78.3 billion funding shortfall in the next decade. Existing funding for California’s local streets and roads comes to $1.7 billion annually, but it would take $3.3 billion annually just to maintain the current statewide average pavement rating of 66. Local agencies, however, would need $7.3 billion annually to bring their streets and roads into a safe and reliable condition. These figures do not take into account the $31 billion needed in the next decade for curb ramps, sidewalks, storm drains, street lights and signals. Furthermore, the state faces a funding shortfall of $1.3 billion to maintain the safety and integrity of California’s 11,863 local bridges.

California’s local streets and roads reached this point due to a combination of factors. The revenue local governments receive for road work is generated primarily from a tax on gasoline, which was last increased 20 years ago. The base gas tax has lost half of its purchasing power over the past two decades, and local agencies get only a portion of these funds to spend for local street and road purposes. California local governments have received some other funding from bonds and the American Recovery and Reinvestment Act of 2009; however, it is not enough to stem the tide. Californians drive farther — 26 percent more miles annually since 1990 — but alternative fuel, hybrids and electric cars have reduced the demand for gas. Thus, there is less gas tax revenue to support the streets and roads used by all vehicles. Revenue has stagnated despite higher road use.

Seeking Solutions to the Growing Crisis

All California legislators receive a copy of the biennial report, and its findings are the basis of crucial policy discussions with state and local leaders. California’s local roads and bridges need a more stable funding source to address the backlog of work and move this system forward, promote sustainability and ensure Californians’ quality of life.

The full report and interactive maps showing the street and road conditions for every California city and county can be found at www.SaveCaliforniastreets.org.