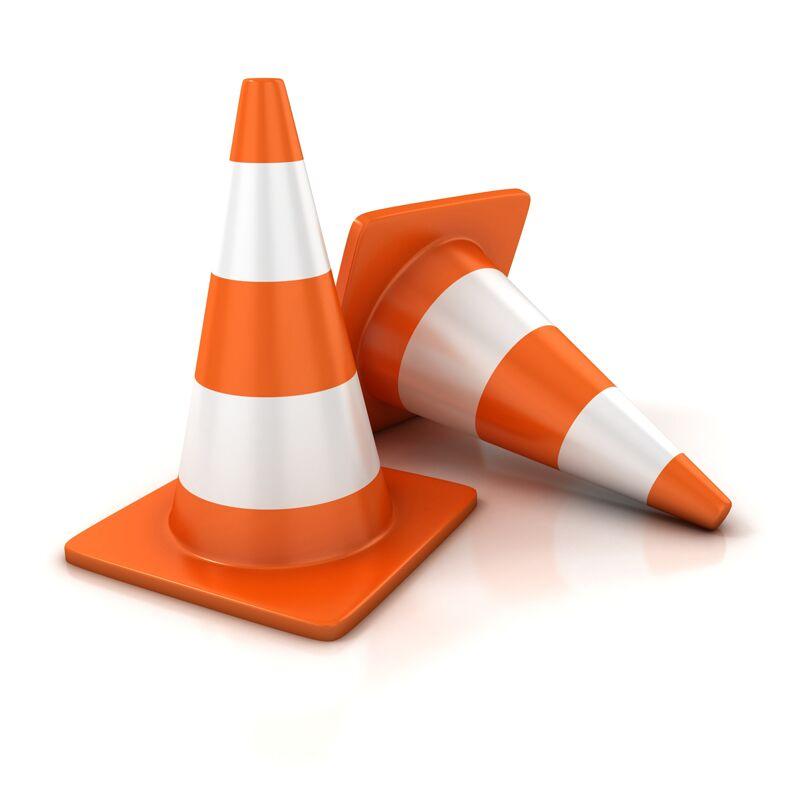 The Outstanding Local Streets and Roads Project Awards program recognizes exceptional achievements made by California’s cities and counties to preserve and protect the public’s investment in the local street and road system. The League, the California State Association of Counties and the County Engineers Association of California (CEAC) sponsor the awards program. Launched in 2014, the awards program recognizes cities’ and counties’ use of projects, programs, practices, materials and innovative technologies to achieve safety, preservation and sustainability goals for the local street and road systems. This article presents the 2015 winners, who received their awards at the League’s Public Works Officers’ Institute and CEAC Spring Conference. These projects provide examples of best practices and can be replicated by other jurisdictions.

The four winners, one city and three counties, made extraordinary efforts to preserve and improve the overall quality of the local streets and roads system. Full descriptions of the winning projects and finalists can be found at www.cacities.org/2015LSRAwards.

Bonnie Teaford, public works director for the City of Burbank and president of the League’s Public Works Department, commends the extraordinary work exemplified by these projects. “The award- winning projects and finalists showcase what can be accomplished with best practices,” says Teaford. “These counties and cities have implemented a wide range of innovations in our local transportation system that serve as the backbone for strong communities and a strong statewide economy. We celebrate them.” She also cautions that California’s local road system is in dire need of investment: “California’s local streets and roads, however, are on the brink. The current funding supporting the roadways that make up 80 percent of the state’s transportation system is insufficient. Without new funding, the roads will crumble beneath our feet and wheels, putting our people, visitors and the economy at risk.”

“This year’s award winners show how local governments can design and deliver innovative, cost-effective projects while still being good environmental stewards and meeting the transportation needs of our communities,” says Mike Penrose, president of CEAC and Sacramento County director of transportation. According to Penrose, recognizing innovation is especially important given the projected shortfall in funding for local roads and bridges in California. “The total funding need over the next 10 years is $108 billion, but the current funding mechanisms from state and federal sources still leave a shortfall of $78.3 billion in that time frame,” he says. 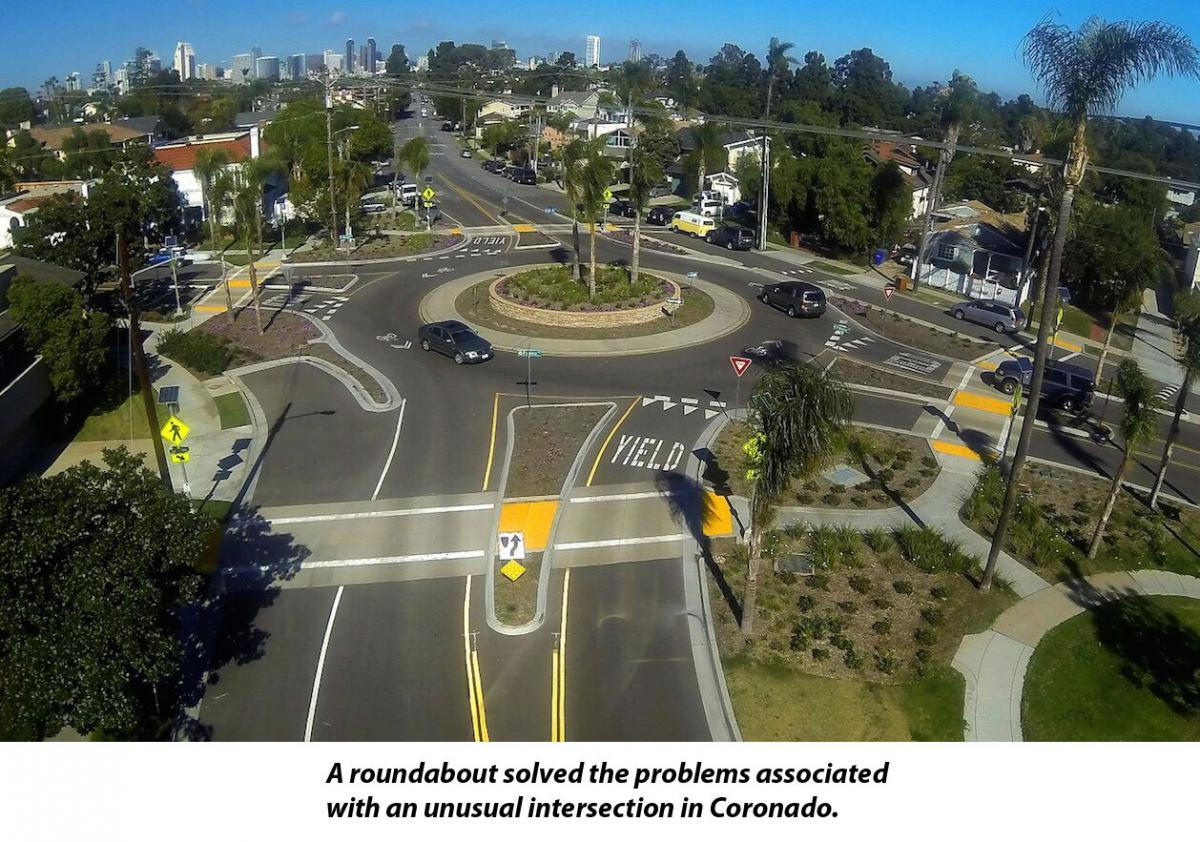 The City of Coronado built the Pomona Avenue Roundabout project to transform a wide, four-legged intersection with nontraditional geometry into a safe, efficient intersection for all users.

Understanding that intersection configuration changes would impact residents, the city conducted a series of public workshops during the design phase to ensure the community would support the final design. A temporary roundabout was installed using rubber curbs to evaluate design characteristics, further educate residents and provide design engineers and residents an opportunity to suggest improvements to the final design.

The project addressed the issue of access points for nearby residential properties by constructing a unique access road adjacent to the roundabout. To further improve safety for both bicyclists and pedestrians, the project includes raised crosswalks with solar-powered rectangular rapid-flashing beacons and exit opportunities for cyclists to leave the roadway prior to the roundabout via driveways and bike ramps. The landscaping design shields adjacent properties from headlight glare, and vehicular paths of travel were moved farther away from residential properties to reduce noise impacts.

Recycling the roadway base material reduced construction waste, costs and the traffic impacts related to transporting material. Construction was completed during the summer of 2014, and the city continues to monitor vehicle speeds, traffic counts, and accident records to ensure the traffic calming and safety goals were realized and maintained. The series of public workshops and temporary installations successfully engaged the neighborhood during the design phase of the project to ensure the outcome would be supported and enjoyed. The project provides a model design process other cities can replicate in their neighborhood traffic-calming improvement programs.

Los Angeles County Department of Public Works has been implementing sustainable pavement treatments for the past few years with positive results. The county’s sustainable approach emphasizes first taking care of roads that are in good condition, using recycled materials in the treatment selections and reusing existing materials in place. The Willowbrook project, located in the Los Angeles County unincorporated community of Willowbrook near the City of Compton, was completed in November 2014 and incorporated the second and third of these green strategies.

Due to widespread distresses, road base failure and yielding subgrade, reconstructing the roads was considered the best solution for the neighborhood. This project reconstructed approximately six miles of residential roadways (983,000 square feet) by paving 1½ inches of asphalt rubber hot mix on 3 inches of cold central plant recycled asphalt concrete pavement over 8 to 10 inches of cement stabilized pulverized base.

The contract cost for the project was $4.5 million. Compared with traditional reconstruction methods, Willowbrook’s pavement treatments saved approximately $2.2 million, which enabled Los Angeles County to invest in improving other county roads. The project also had significant environmental benefits, including:

The Willowbrook project improved the overall quality of the local streets and road system in a cost-effective and environmentally friendly way. Los Angeles County is committed to implementing sustainable projects like Willowbrook that help address existing funding shortfalls and meet the state’s objective of reducing greenhouse gas emissions.

Cold in-place recycling consists of preparing the construction area, milling or grinding the existing pavement, adding recycling agent and binding oil, placing the recycled asphalt in a windrow, compacting the asphalt and placing the surface course. This project replaced four lanes on Hollister Avenue, with two in each direction that were repaired along a distance of 1.2 miles, with a total land distance of 4.8 miles. Reusing gravel from the existing road alleviated the need to truck gravel to the site from 40 miles away. The gravel in the road was evaluated by collecting and analyzing samples to verify its durability for reuse.

Placing and compacting the asphalt as much as reasonably possible produces the most durable asphalt. The project used nuclear gauge testing to determine the asphalt’s density after six-ton rollers compacted it.

This particular type of cold in-place recycling requires low humidity and higher temperatures for proper curing. The work was staged along the project route to ensure access to local schools during the hours when children were dropped off and picked up. The roadway intersections needed to reopen as soon as possible once the work was completed. To expedite the process, a thin layer of oil and sand was placed on the drying asphalt to accelerate curing time and serve as a buffer under the wheels of vehicles traveling on the road.

The Grant Avenue Pathway and Drainage Improvements Project addressed problems on Grant Avenue between Via Seco and the Union Pacific Railroad. Grant Avenue serves as a major east-west arterial route in the San Lorenzo community and serves three nearby schools as well as an industrial area (with associated truck traffic) at one end of the street.

The existing roadway was primarily a two-lane roadway with a significant elevation difference from the adjacent dirt pathway. This crowning of the roadway caused storm runoff and created problems for all users. During rainstorms, muddy pathways forced children walking to and from the three schools on or near Grant Avenue into the street. Water collecting in uneven pavement near the bus stops created big splash zones when buses passed by and large mud divots when buses pulled into a bus stop. Public transit riders had to navigate this ponding water and deep mud simply to board a bus. 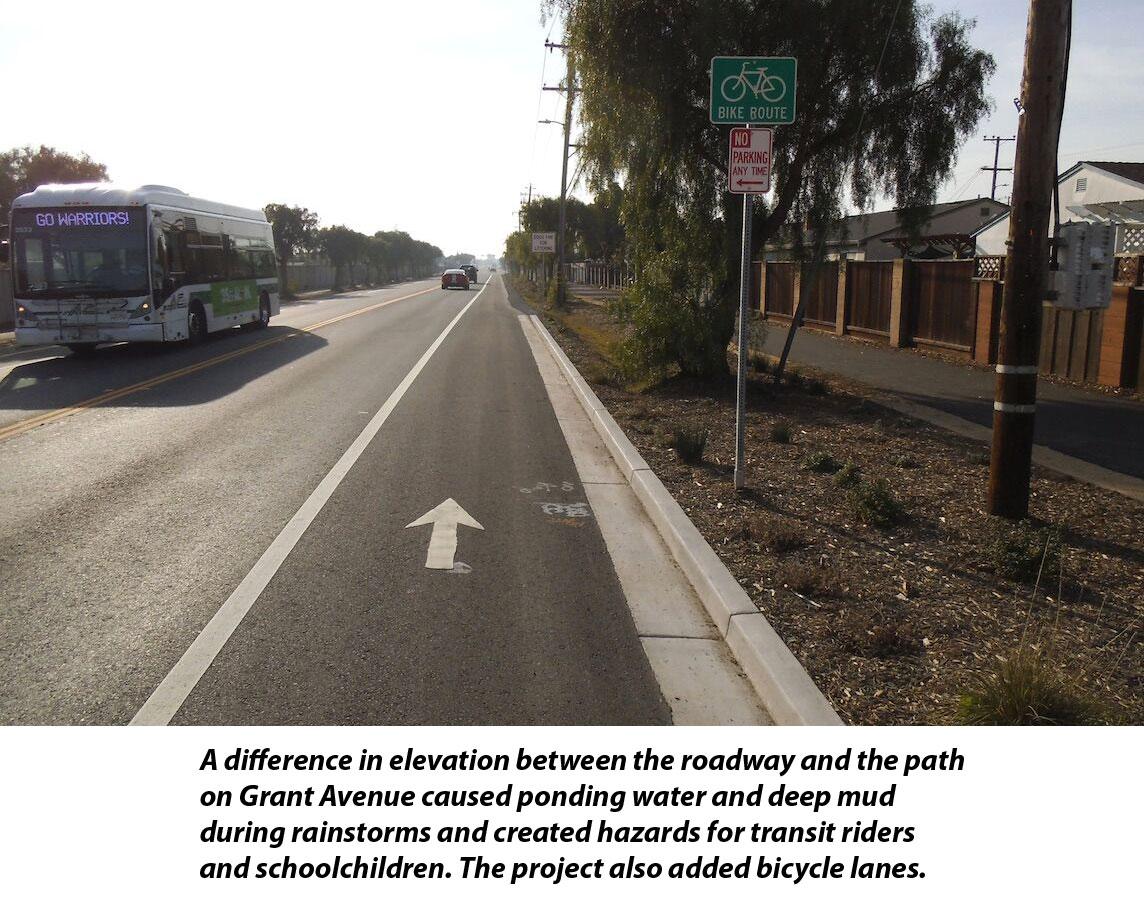 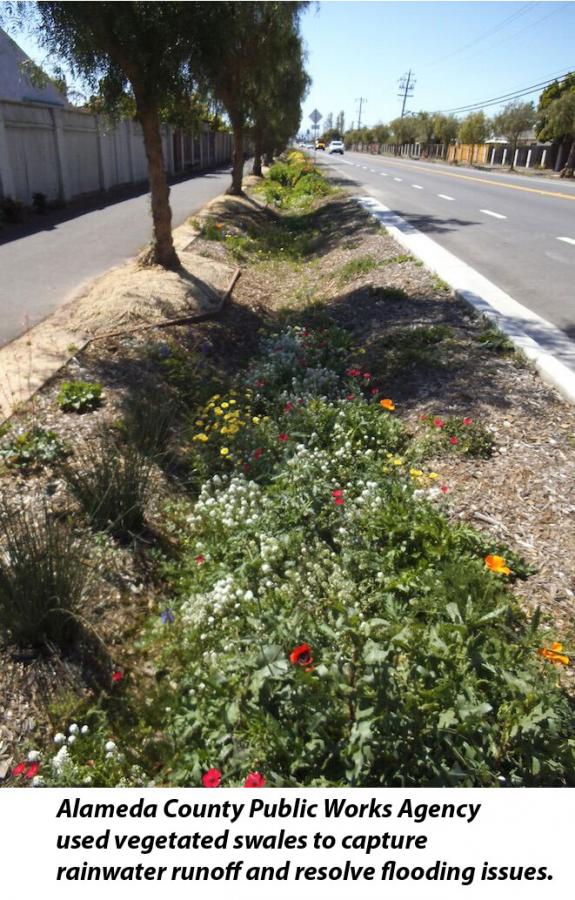 One of the project’s innovative features uses vegetated swales to resolve drainage and roadway flooding issues rather than lining the entire street with more commonly used concrete curbs and gutters. Vegetated swales are broad, shallow channels with a dense stand of vegetation covering the side slopes and bottom. These swales capture stormwater runoff from roadway and pathway surfaces and remove silt and contaminants before the water enters the drainage system or groundwater. The benefits of vegetated swales over conventional stormwater management practices include the reduction of peak flows, removal of pollutants, promotion of runoff infiltration and lower capital improvement and maintenance costs.

Rain gardens were incorporated into this project to minimize the removal of existing vegetation and provide an environmentally friendly, cost-efficient solution to stormwater pollution by capturing clean rainwater runoff from Grant Avenue and diverting it into the rain garden. Contaminants are filtered as water slowly soaks into the ground. The project uses native plants in the rain gardens because they are best suited for the climate and thrive in both wet and dry areas.

These safe and sustainable community improvements serve the multimodal transportation needs of residents, school children and nearby businesses. The improvements also complete an important pedestrian and bicycle transportation link between the residential areas of San Lorenzo and the San Francisco Bay Trail.

This article appears in the August 2015 issue of Western City
Did you like what you read here? Subscribe to Western City