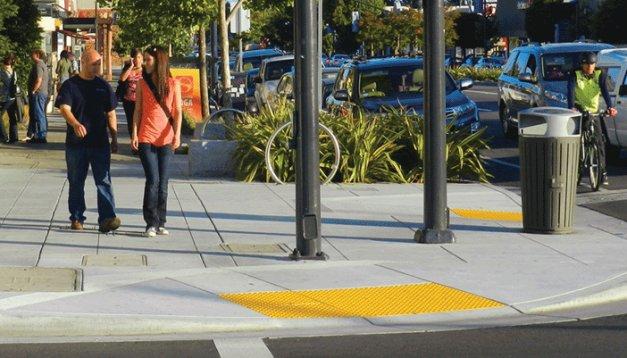 In tough economic times expectations remain high for cities to provide quality public services and facilities, though resources to fund desired projects are scarce. One strategy for overcoming limited resources is to combine forces with other agencies and organizations to leverage expertise, staff time and funding. For example, cities can collaborate with nearby counties and schools as well as state agencies to make walking and bicycling safer for residents and achieve health, economic and other community goals.

Two cities, similar in size but different in context, offer remarkable examples of pioneering efforts to chart a more collaborative method for making roadway infrastructure improvements. El Cerrito, with nearly 25,000 residents, is located in the San Francisco Bay Area; Dixon, with nearly 20,000 residents, is surrounded by agricultural land, 20 miles southwest of Sacramento. Although each city approached the task in its own way, local and civic leaders in both cities confronted these questions:

Each city decided to build on its existing strengths to improve its streets for all users. Their experiences provide some important lessons for communities grappling with similar challenges.

El Cerrito is located in Contra Costa County (pop. 1,049,025), adjacent to the cities of Richmond and Albany. Urban arterial San Pablo Avenue knits together East Bay communities from San Pablo in the north to Oakland in the south, including the cities of El Cerrito and Richmond. San Pablo Avenue serves as El Cerrito’s main street but has lost any cohesive identity since Interstate 80 replaced it as the primary route through the area, although the avenue remains a state highway under the jurisdiction of Caltrans.

Faced with the declining economic vitality of this central roadway, the City of El Cerrito initiated the San Pablo Avenue Streetscape Improvement Project in collaboration with Caltrans. The project’s goals were “to create a distinctive sense of place, improve the walking environment, enhance transit stops, provide better landscaping and increase pedestrian safety and accessibility.” The process began in 2007 and concluded in 2011, marking El Cerrito as a leader in active transportation and complete street policies and design. Design features along the improved San Pablo Avenue include:

The city implemented the project in phases, in part to maintain the momentum and in part due to funding and permitting issues. The first phase encompassed the installation of navigational signage and banners in 2006 and continued with completion of the median landscape renovation from 2007 to 2008. The major streetscape enhancements were completed in October 2011. Using funds from a local “1% for Art” program, public art is being installed this year. A variety of other sources provided funding for the project:

While El Cerrito collaborated with Caltrans, the city was also working with neighboring Richmond to cooperatively prepare a Specific Plan for San Pablo Avenue, which is still under way. The physical improvements have made the street more welcoming to pedestrians and bicyclists and created a vibrant avenue that provides access to numerous civic and cultural destinations, including schools, city hall, a renovated major shopping center, a restored historic theater complex and two Bay Area Rapid Transit (BART) stations. The joint planning effort of El Cerrito and Richmond offers great promise for both communities to realize future improvements in resident health, pedestrian safety, connectivity between the two cities and economic vitality.

The City of Dixon is located in Solano County (pop. 413,344). Nearly 600 traffic collisions occurred in Dixon from 2002 to 2011, and 13 percent of these involved pedestrians or bicyclists.

The dangers of walking and biking along these routes affected all local residents and concerned officials at the City of Dixon and the Dixon Unified School District. When the Solano Transportation Authority approached the community about improving transportation options with a focus on school routes, the city and the schools partnered with the authority to study the problem and implement program and physical improvements. This partnership extended to all seven cities within the county to prioritize potential Safe Routes to School projects.

Because of the diverse positive impacts of these improvements, several sources provided funding for the project. Countywide, since 2008 a total of $3.96 million for non-infrastructure programs (education and enforcement) came from:

Solano County has invested $10 million in State Safe Routes to School engineering projects in the past four years, compared to $1.1 million spent for engineering in the 10 years prior to the development of the 2008 plan. The $10 million included the following support for Dixon’s efforts:

Benefits to the community can be seen through better air quality, reduced traffic, safer routes to schools, neighborhood vitality and the improved physical health of students and residents.

Resources for Collaboration and Partnerships

Leveraging resources to serve shared constituencies — in cities, counties, schools, the region and state — can solve serious problems facing residents. Recognizing the multiple benefits and beneficiaries of a single project can spur partnerships to make progress on issues that previously seemed insurmountable. The Institute for Local Government provides many resources on its website in the Collaboration and Partnerships section (www.ca-ilg.org/collaboration-partnerships) to help communities make the most of these shared needs.