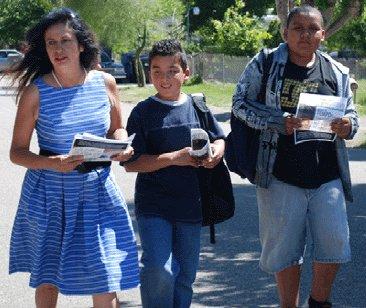 The City of Perris won the Award of Excellence in the Cities, Counties and Schools (CCS) Partnership Intergovernmental Collaboration category of the 2012 Helen Putnam Award for Excellence program. For more information about the award program and the next application deadline, visit www.helenputnam.org.

Working together, government agencies can often produce results they were unable to achieve alone. Involving residents is often the catalyst for success. In the community of Enchanted Heights, three local and two state agencies came together to solve a long-standing public health issue by finding a way to engage the residents and win their support.

A Tough Problem to Solve

Perris is a 101-year-old city in the center of western Riverside County. Incorporated as a tiny agricultural enclave, the city has grown into an urbanized diverse community with a population of nearly 70,000. The Enchanted Heights neighborhood, located half within the City of Perris and half in Riverside County, has also evolved. Built originally as a resort community of one- and two-person residences in the 1970s, the neighborhood is now home to families with children, parents and grandparents. Over time, population growth strained the aging and leaking septic systems, causing them to fail and creating a potential public health hazard. Sewage ran down streets where children walked to and from school.

Although the solution to this problem was obvious — build a sewer system — funding proved elusive. The institutional barriers were also enormous: The majority of residents did not speak English and were culturally isolated. Technological challenges in the community made mainstream communication difficult.

The city, working in collaboration with its partners, Riverside County and Eastern Municipal Water District, secured $9.7 million from the California Department of Public Health to construct the mainline sewer and $5 million from the State Water Resources Control Board for the on-site work and connection fees.

For the City of Perris, which took responsibility for the public outreach portion of the project, the work was just beginning.

“There’s more to a successful infrastructure project than moving dirt,” says Ron Carr, the city’s assistant city manager. “Ultimately these projects are about engaging people, and that doesn’t happen in city hall. It happens out in the community.”

It soon became apparent that convincing primarily Spanish-speaking residents to sign a complex legalistic document — the “right of entry” form to allow contractors onto their property — would not be an easy task. Many residents were reluctant to allow government officials onto their property for any reason, yet without their signatures, the sewer system would not be built.

As time passed and community apprehension about the project increased, city staff sensed the project slipping away. So the city launched a face-to-face outreach program.

City staff began by talking to individual residents and small groups in front of their homes. Residents asked questions and staff answered in plain non-bureaucratic language that was easy to follow. Staff spent entire days walking the neighborhoods in subsequent weeks, distributing flyers that detailed the project in English and Spanish. Residents began recognizing staff, who were becoming a familiar sight. Enthusiasm for the project built gradually.

Soon the residents’ children started passing out flyers in the neighborhood about the project. Those children also helped translate information to their Spanish-speaking parents on how the City of Perris and its partners planned to improve the quality of life in their community and encouraged them to support the project.

Working with school district personnel, the city, Riverside County and Eastern Municipal Water District organized four community forums, conducted in both Spanish and English at a neighborhood school. Hundreds of residents attended each forum, where they had another opportunity to express their concerns. The city and its partners developed solutions to address them and then went back to the residents to explain their ideas.

The campaign ultimately reached nearly every resident and gained the enthusiastic backing of more than 95 percent of homeowners. The project moved forward.

Construction began in August 2011 and is slated for completion in mid-2013. When Enchanted Heights resident Roscoe Howard heard the “boom-boom-boom” of construction equipment outside his home, it was music to his ears.  “I was so pleased the City of Perris was taking care of us,” he says. “It’s a great improvement over the way we had been living for many years,” adds Martha Ceja, a longtime resident.

Perris Mayor Daryl Busch praised the city’s outreach program and commended the spirit of cooperation between the municipal, county, regional and state agencies that made the project possible. “Our partnership is a tribute to what can happen when government agencies work with local residents,” says Busch. “We are very proud.”