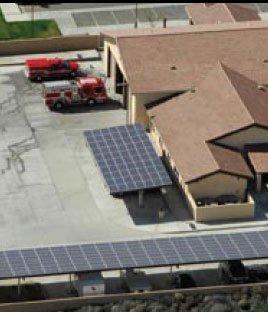 The City of Perris is reducing its electricity needs by at least 20 percent using newly constructed solar carports and energy conservation measures at several municipal facilities. This project was completed at no net cost to the city through a public-private partnership.

Perris entered into a mutually beneficial power purchase agreement with Honeywell International, Inc., to build, operate and maintain the carports while providing solar electricity to the city at a guaranteed savings. The energy and operational cost savings for the city over the 20-year term of the agreement total $1.7 million.

Some of the money saved was used to cover the cost of energy conservation measures — lighting retrofits, replacing a heating, ventilation and air conditioning unit and installing programmable thermostats — which will save the city nearly $55,000 annually. The energy conservation savings are guaranteed through a performance contract with Honeywell, so the improvements will not increase the city’s operating budgets or require additional taxpayer dollars. The conservation measures also improve the indoor comfort of municipal buildings, especially in heavily used recreational facilities like the Bob Glass Gymnasium.

“This project is a classic win-win solution in every sense; it shows just how effective public-private collaboration can be,” said Ron Carr, assistant city manager and project leader.

Solar panels were installed on the roofs of new carports at five sites: the library, senior center, fire station, corporate yard and city hall. The custom solar carports are expected to produce 370 kilowatts of electricity — enough energy to power about 100 homes per year, cover at least 20 percent of the city’s electricity needs and provide more than 240 shaded parking spaces.

In an effort to increase public awareness, the Solar Shine Program links the five solar sites via the Internet to community access kiosks located in Perris City Hall and the Cesar Chavez Library. Residents and visitors can monitor the solar production and energy consumption at each of the five sites.

Through collaborative efforts with the Riverside County Library System and Honeywell, the Solar Shine Program offers live feeds and hands-on programs so that young people can learn about declining natural resources and current conservation technologies. In addition, the Riverside County Library System obtained a grant from the Boeing Company to launch a Saturday Summer Program to teach children about solar energy technology. The grant also funded the purchase of 70 books about solar and alternative energy, which are displayed near the library’s community access kiosk.

The Solar Shine Program reduces carbon dioxide emissions by 960,000 pounds per year — equivalent to removing more than 90 cars from the road. Protecting the environment, creating the conditions necessary to improve the quality of life for residents and promoting sustainable development are all part of the city’s General Plan.

“Not only has the project resulted in higher than expected energy savings,” said Mayor Daryl Busch, “it has also served as a catalyst for the city and the development community to consider incorporating greener building practices into future developments.”