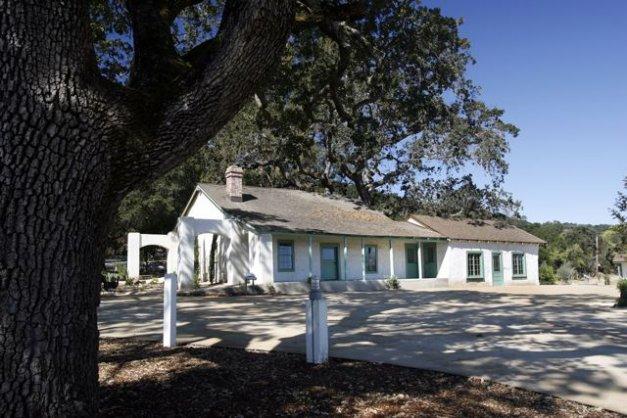 Pleasanton’s Alviso Adobe Community Park: A Unique Window to the Past

Joanne Hall is public information officer for the City of Pleasanton and can be reached at jhall@ci.pleasanton.ca.us.

Pleasanton’s Alviso Adobe Community Park is a unique historic resource that tells the story of California dating back to 3,420 B.C. and depicts how people lived on one parcel of land over thousands of years.

A $4.5 million restoration, funded through the city’s capital improvement program over a 15-year period, developed the site into an interpretive park where school children and visitors can learn about the history of the Amador Valley and get a rare glimpse into the past. Original remnants of each historical period have been left intact, from its earliest recorded human habitation as a settlement of the native Ohlone Indians to the days of the Spanish ranchos to the early 20th century when it was home to one of California’s first certified dairies. 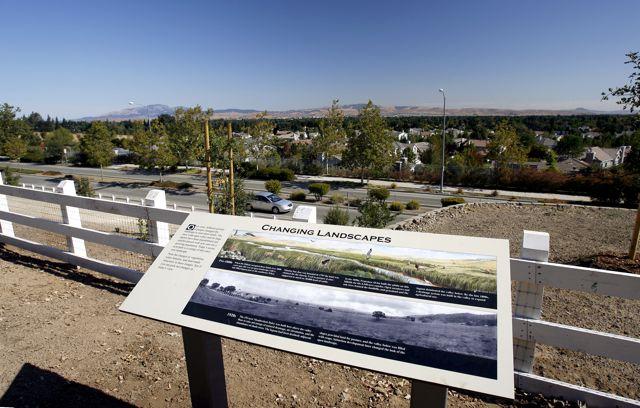 The City of Pleasanton acquired the seven-acre park site in the early 1990s from a developer through a park dedication requirement for the adjacent Laguna Oaks housing development. A few years later, city staff, a citizens task force and a landscape architecture firm launched a design and construction process that took more than a decade. This complex project involved restoring the historic Alviso Adobe, which serves as the park’s physical and interpretive centerpiece. One of the first buildings constructed in the Amador Valley, the Alviso Adobe has been designated State Historical Landmark No. 510 and is particularly noteworthy because it’s one of the few remaining adobes in Northern California. At one time, the region was home to 700 such structures, but most of them have been felled by earthquakes and the ravages of weather. The Alviso Adobe’s structure was stabilized in the mid-1990s with new adobe bricks created from the local soil, using the same process applied during its original construction more than a century earlier.

The adobe was restored by specialists intent on matching the building’s appearance to its period of most active use around 1920. The adobe’s interior was also carefully considered, and the restoration included period furnishings. The project also recreated the Meadowlark Dairy, which occupied the site from 1919 to 1966, and the bunkhouse where the dairy workers lived. The milking barn and bunkhouse now accommodate interpretive displays and an activity center. 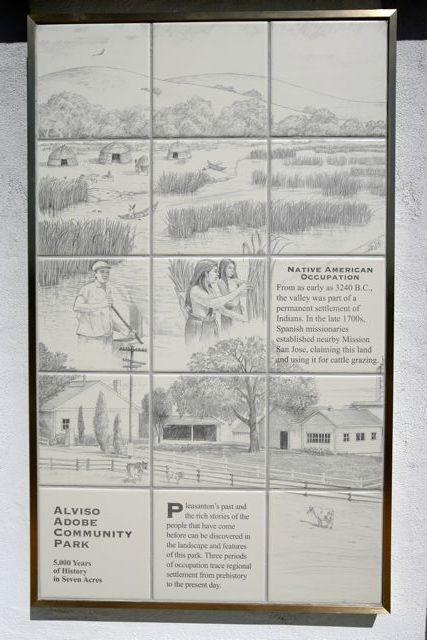 Preserving historical artifacts was another important component of the park development. First steps included archival research and field investigation by archeologists who were included on the design team. The site features a Native American grinding rock and a historical representation of early Indian inhabitation.

The park offers a dramatic overlook of the valley, and displays provide images of Pleasanton throughout its history. A small amphitheater seats up to 50 people. Nearby demonstration areas involve visitors in the activities of the past, such as making adobe bricks and churning butter, and learning about how native plants were used for food and medicine by the region’s earliest dwellers.

The park grounds have been carefully landscaped, and approximately 95 percent of the trees, plants and grasses on the park premises are California native species. City Naturalist Eric Nicholas is working with botanists from the University of California, Berkeley, and the California Native Plant Society to collect, identify, and preserve the park’s native and non-native plants. “The goal is to restore the landscape to its original condition as it was before human settlement,” says Nicholas. This provides an opportunity in the long term to utilize the plants in interpretive programming. In the short term, it also provides a broad opportunity for volunteers, including students, botanical groups and gardeners, to participate in the effort.

The Alviso Adobe Community Park offers weekday tours for school groups. All of the park’s programs meet the California State Curriculum Grade Level History/Social Study standards, and programs are specifically tailored to the grade level of each group.

A Pioneers Program features two-hour tours of Alviso Adobe Community Park that focus on one of four educational areas: cultural history; biology; science; and bio niches. Teachers who opt for cultural history can select from several programs such as Time Travelers, Native Ways, From Soil to Supper, Adobe Chores, Dairy Discoveries and more. In the biology segment, students learn about the Fauna Around our Farm or Anthropods in the Garden. The science curriculum includes a unit on Digging Pleasanton and Expanding Our Universe, and the bio niches track covers such topics as Butterfly Garden, Riparian Rendezvous, Stewards of the Valley and Self-Guided Station Days. 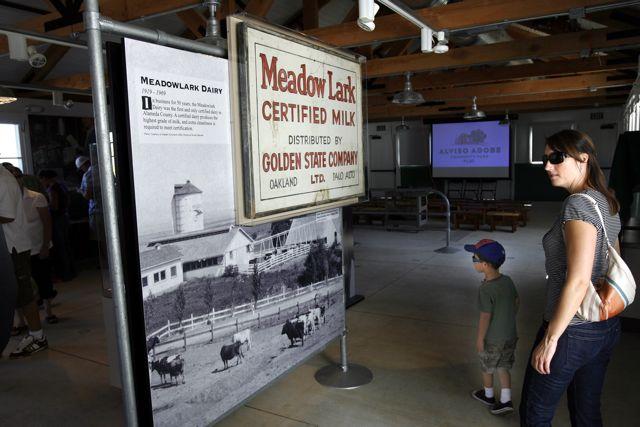 Portions of the Ridge Runners summer day camp offered through the city’s Recreation and Community Services Department for children ages 6 to 12 are also held at Alviso Adobe Community Park. This nature-based camp teaches youngsters about outdoor skills, including building a shelter, navigation, making tools and wild animal encounters. A Counselor-in-Training program for teens ages 12 to 15 provides instruction at a higher skill level; participants learn to use ropes and more technical outdoor tools.

The general public can take self-guided tours of Alviso Adobe Community Park during the week on Wednesday, Thursday and Friday, and on Saturday and Sunday from 10:00 a.m. to 4:00 p.m. The park is closed on Monday, Tuesday and city holidays. Local residents and out-of-town visitors can enjoy a leisurely walk along the paved paths that run through the park. Signage describing the historical and natural points of interest are located at several locations within the park.