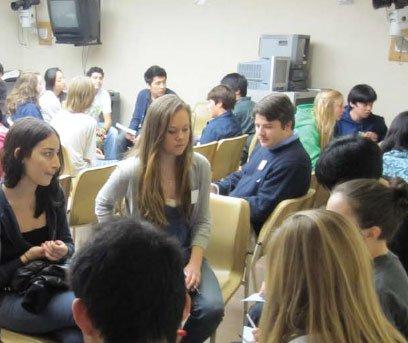 Project Safety Net Works to Save Lives in Palo Alto

The City of Palo Alto is located 35 miles south of San Francisco and 14 miles north of San Jose, with a population of approximately 63,000 residents. The Palo Alto community was shaken in May 2009 when a local highschool student committed suicide at a railroad crossing. Seven more teenagers died by suicide in the ensuing 19 months, with six of the deaths occurring at or near the same railroad crossing. Widespread grief and concern about these tragedies led to the creation of the Project Safety Net (PSN) Community Coalition.

The City of Palo Alto and the school district took a leading role, working with the coalition partners to develop both short- and long-term plans to support suicide prevention and enhance the social and emotional health of youth and teens in Palo Alto. A long history of collaboration among Palo Alto community groups, schools, parents and the city helped make it possible to get the effort off the ground quickly.

The coalition’s mission is to develop and implement an effective, comprehensive, community-based suicide prevention and mental health plan for overall youth well-being in Palo Alto. The PSN plan (www.PSNPaloAlto.org) encompasses education, prevention and intervention strategies that together provide a safety net for youth and teens in Palo Alto.

The Palo Alto community came together in an extraordinary way. According to Ray Bacchetti, chair of the city’s Human Relations Commission, “Project Safety Net revealed strengths we didn’t know our community had.” The coalition drew on local and national experts and best practices for community-based mental health and suicide prevention and developed 22 specific strategies, actions and recommended next steps, which were presented to the city council and school board.

The coalition encourages the entire Palo Alto community to participate in some way. PSN members tend to gravitate to one end or the other of the prevention spectrum depending on their expertise and interests or where they think they can have the greatest impact. The coalition has made a concerted effort to keep all community members on both ends of this spectrum working together as part of a united endeavor. Palo Alto’s Parks and Recreation Commissioner Pat Markevitch says, “I am so proud of the way our community came together on Project Safety Net to work toward positive outcomes for the health and well-being of our youth.”

A Focus on Well-Being and Suicide Prevention

Project Safety Net continues to make significant progress toward its goal of engaging the community to focus on fostering youth well-being and suicide prevention. According to Michael Donohue, executive director of the nonprofit Kara Grief Support and Education, “Project Safety Net is one of the few organizations that truly lives up to its name.” Examples of the coalition’s achievements to date include the following:

The coalition’s ongoing efforts include:

“Project Safety Net has knit more than 20 public and nonprofit agencies into a caring community working together for the well-being of our youth and teens,” says Bacchetti.

Bringing people together to work on this challenging issue has been both rewarding and heartbreaking: rewarding as the community makes progress, builds new relationships among partner organizations and witnesses the remarkable goodwill that surrounds youth and teens in Palo Alto; and heartbreaking as people grieve for the young lives lost. The City of Palo Alto’s role as a convener and coordinator has proved to be a key element in the first two years of Project Safety Net, and city leaders look forward with optimism and hope as they continue to support this important work.