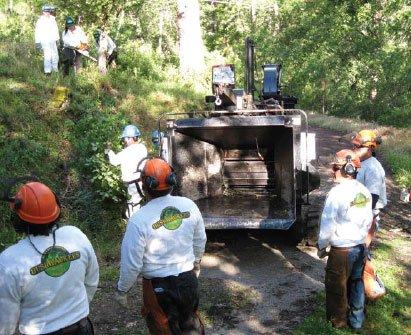 Wildfires in California are a major ongoing concern for local officials and residents alike, and communities are exploring ways to minimize the devastating impact of potentially catastrophic wildfires.

As the Western Forestry Leadership Coalition noted in its April 2010 report The True Cost of Wildfire in the Western U.S., “Scientists agree that aggressively reducing fuels in forests can significantly reduce the risk of catastrophic fire.” The benefits of proactively removing wood fuel from medium- to high-risk stands of timber can often exceed the cost by $1,000 to $2,000 per acre. The report concludes that “investing in healthy forests well before fire occurs is the wisest course of action.”

For many cities in California the challenge of wildfire prevention is compounded by the fact that the state and federal governments own huge tracts of forests adjacent to urban areas. Budget cuts to the agencies managing these forests have resulted in deferred maintenance, and vital fuel reduction activities are not happening. Every year the public safety threat grows worse.

The City of Auburn and its residents have been confronted with this critical situation in recent years. The city’s entire eastern boundary, tens of thousands of acres in the American River Canyon, is owned by the federal Bureau of Reclamation (BOR). But over the past eight years very little fuel reduction has occurred in these overly dense and highly flammable woodlands. The BOR, citing budget cuts, has not been able to maintain the 300-foot wide, 11-mile long American River Canyon shaded fuel break along Auburn’s eastern boundary.

But the 49 Fire, which destroyed 63 homes just outside Auburn in August 2009, increased the community’s sense of urgency about the need for proactive wildfire prevention. As 2010 began, city leaders faced a dilemma. Should the city wait for the BOR to do its job and reduce fuel on the American River Canyon shaded fuel break? Should city leaders wait and hope that the federal government would provide large grants so that the city could do the job? City leaders and fire safe council volunteers decided that the danger to city residents was so great that they had to act before the next fire season began.

Getting permission for Auburn residents and volunteers to work on federal land was the first hurdle. While some local community groups had been given permission to build trails or pick up litter, the federal government rarely allowed volunteers to go on its land to reduce the threat of catastrophic fire.

The city worked hard to build a high level of trust with the local BOR land managers. Auburn Fire Chief Mark D’Ambrogi successfully negotiated a memorandum of understanding with the local BOR manager to allow specific fuel reduction projects staffed by volunteers and paid personnel. The Auburn Fire Department would supervise all projects.

The fire safe council selected a nine-acre area known as Robie Point as its target and scheduled a work day for Saturday, May 22, 2010. To ensure that every aspect of the work project was addressed, the fire safe council met weekly in the months prior to the work day and created a detailed seven-page checklist to guide the day’s activities.

The fire safe council also launched a campaign through the local newspaper, radio and cable television to recruit volunteers and raise funds to pay for the project expenses. The city donated bus service to transport volunteers in and out of the work site, which could be accessed only by a narrow road. A local service club prepared lunch for the 114 workers who participated.

A key part of the plan entailed having only professionals, local firefighters and members of the California Conservation Corps actually cutting dead trees and brush. Volunteers then dragged the branches and brush to the wood chippers. Two private companies donated three wood chippers and their crews’ time. In a single day, the team cut and chipped 158 tons of wood without any injuries or mishaps.

More than 150 local fire safe councils throughout the state are active in minimizing the potential for wildfire damage to their communities and maximizing the health of California’s natural resources. For more information, visit www.firesafecouncil.org.