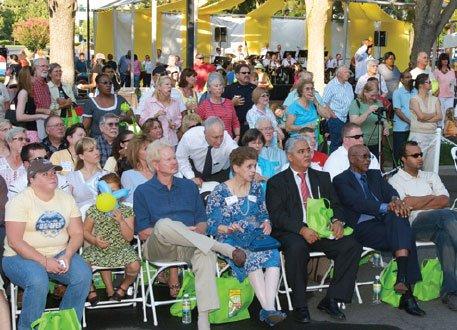 When 22 Rancho Cordova residents stepped up to a Kansas City podium to accept an All-America City award from the National Civic League in June 2010, the distance traveled was measured in more ways than miles. Not long ago many of them had lost optimism about Rancho Cordova’s future. The community had fallen on tough times, and hope was hard to find. Even today, this ethnically diverse urban city of 62,000 is recovering from three decades of decline. But a critical corner has been turned, and confidence in what lies ahead has become a hallmark of community life.

Rancho Cordova, nestled along the scenic American River and just a few short miles from California’s capital, was the community of choice in the 1960s for the Sacramento region. Major employers like Aerojet, an aerospace company with leading roles in defense and NASA programs, and Mather Air Force Base provided high-wage jobs and leadership to the growing unincorporated area of Rancho Cordova. The community featured bright new subdivisions, plentiful recreation options, robust community groups and churches, new schools and parks, and a bustling economy.

Rancho Cordova continued to shine even into the 1970s, with thousands of aerospace engineers and Air Force officers calling it home and leading the community to a variety of triumphs, which included a run of state athletic championships for local sports teams. In short, it was the “all-American city.”

Those glory years concluded painfully as the space race and Cold War ended and defense spending was cut. Aerojet employment plummeted from 22,000 employees to 1,400. Mather Air Force Base was shuttered altogether in 1991, wiping out another 10,000 jobs and eviscerating the community’s leadership structure. Much of the housing that once served base and aerospace workers was now suitable only as low-income housing, which quickly filled with waves of immigrants — first from Southeast Asia, then Soviet bloc nations and Mexico.

Out of this crisis came a unique opportunity.

Some residents of Rancho Cordova had lobbied for incorporation of the community, beginning in 1978. Sacramento County opposed the idea. Early efforts at incorporation were thwarted, and subsequent events stymied the effort. But over time, momentum in the region grew as the neighboring communities of Citrus Heights and Elk Grove successfully incorporated. By the year 2000, the incorporation effort, now spearheaded by the Rancho Cordova Chamber of Commerce, was picking up steam. New business was coming into the community, filling up the old Mather base and creating a large concentrations of jobs. Finally, in 2002, after clearing all the county-imposed and Local Agency Formation Commission (LAFCO) hurdles, Rancho Cordova residents voted 78 percent in favor of incorporation, betting their future on the unknown.

The new City of Rancho Cordova faced many challenges, which included improving the community’s image and saving aging neighborhoods from further decline. Early successes focused on getting city government established and operating efficiently. The city contracted out for a variety of services and realized significant savings in many areas. These savings allowed the city to enhance police and code enforcement services far beyond what had previously been available in the unincorporated community.

The motto was to be firm but fair in enforcing codes that had not been enforced prior to incorporation. The results were stunning. Some long-term problem properties were improved with little effort, and other more serious problems were identified and pursued using every option available to the team. In the end, streets and neighborhoods were neater, cleaner and safer. For some of the toughest cases where residents were on fixed incomes and had little personal capacity for work to improve their property, the city worked with volunteer organizations and churches to step in and donate labor and materials to restore properties to a satisfactory condition. Today, the Blightbusters program is recognized at the state and national level as a model for code enforcement.

An Innovative Approach to Deal With Blight

Another major step for Rancho Cordova was implement ting a strategy to deal with dozens of outdated and poorly maintained apartment complexes. These apartments, constructed to house workers from Mather and Aerojet, were approaching or had passed the end of their useful lifespan. Ordinary code enforcement strategies did little to persuade out-of-town property owners of the need for improvements. The city sought a stronger and more flexible method to deal with the crime and blight issues that pervaded many of these complexes.

What was needed was an apartment inspection ordinance that allowed access to the inside of apartment units for purposes of inspection and provided leverage to work with apartment managers on clearly established new standards of operation and owner responsibilities. Having seen many such ordinances fail to function as intended in the region, Rancho Cordova took a different course. The city approached the local apartment owners’ association and asked them to write the ordinance.

City leaders knew that they didn’t need to punish good operators and managers to improve the community; the bad actors were the target. For the most part, they didn’t belong to the local association. The association crafted an ordinance that met the city’s needs and didn’t have outrageous fees for the good managers, but came down firmly on the owners of blighted property. Basically, unit-by-unit inspections are not triggered until a certain number of code violations or calls for service from a property is reached. The ordinance passed without dissent, and the city has been using it to clean up and close blighted multifamily properties ever since.

In a related effort, we’ve also worked to inform and regulate other residential landlords and absentee property owners. As elected officials, my colleagues and I recognized that the worst-looking house on a street was typically a rental home with an absentee owner living far away who didn’t much care what it looked like from day to day. We have required such owners to acquire a business license for their rental business at a nominal cost and pursued the same firm but fair approach to improving their properties.

Rancho Cordova also encompassed some seriously outdated commercial areas, particularly along Folsom Boulevard, which once was U.S. Highway 50 before the freeway was constructed. The old Highway 50 had 1960s automobile-centric zoning for gas stations, motels and fast food. Now, nearly 50 years later, what appeared to the community to be its main street had a light-rail corridor on one side and outdated, dilapidated properties on the other.

Finding solutions for Folsom Boulevard has been a somewhat painful process. Overlaying antiquated commercial zoning with smart-growth inspired compact development, including residential development at nodes located adjacent to light-rail stations, continues to rankle longtime residents and Folsom Boulevard property owners who protest these sweeping and far-sighted changes. Only time will tell the measure of success along historic Folsom Boulevard.

Rebuilding a Sense of Community

However, having laid a foundation for change in the neighborhoods, it was time for city leaders to turn their attention to Rancho Cordova’s lifeblood — the people who populate the city’s many churches, civic organizations and fraternal clubs and groups. Looking for local leadership in this area, the city council settled on a 50-year old organization that had virtually created the community five decades earlier during a period of civic enlightenment, but now urgently needed a makeover of its own.

This organization, the Cordova Community Council, still existed and held lackluster monthly luncheons. While the group had lost much of its original impetus, it still had the capacity to rally people for community causes and presented an annual fireworks show for the Fourth of July. What could this group do to reinvigorate community life with dynamic leadership and a healthy dose of municipal funding? There was only one way to find out.

The new and improved Cordova Community Council debuted in mid-2008, operating out of space in City Hall loaned free of charge to the group for the purpose of stimulating civic engagement in community life. Concentrating on connecting with citizens through a broad array of lively community events the Cordova Community Council teams up with various partners for celebrations like the Kids’ Day in the Park, iFest (international festival), Celebration of Faith, California Capital Airshow and the biggest local bash of all, the Rancho Cordova Fourth of July.

These activities have reinvigorated community stakeholders who now work together to burnish the city’s once faded civic pride. Working from inside their offices in city hall, the Cordova Community Council continues to attract citizens to take their place among the leaders of these volunteer-driven activities. It has also helped create the Rancho Cordova Historical Society and a Leadership Rancho Cordova program that offers professional strategic planning and visioning services to longtime civic organizations in need of new direction.

It all came together in June 2010 when the Cordova Community Council and City of Rancho Cordova collaborated in pursuit of All-America City honors. The three-part application explained how citizens were leading the way in tackling certain homeless issues and how immigrant parents and the local school district were collaborating to present unique Saturday Schools, where children came to preserve the culture of their mother country. Along the way both kids and parents alike were learning how to thrive in the American system, thanks to the Saturday Schools.

Rancho Cordova is now poised for continued renewal. The financially sound city has enjoyed budget surpluses every fiscal year since its incorporation and an increasing bond rating and large untapped reserves accomplished without the need for new taxes. Our community organizations are strong and getting stronger and our neighborhoods are looking cleaner and neater. We’ve got a long way to go, dealing with outdated commercial property and zoning, but with the momentum that has been created, we are optimistic that the needed changes are within reach. In Rancho Cordova, reinvention is a prized core value that has motivated us to reclaim our community from the jaws of decline. It’s been a long journey, but oh, what a ride.