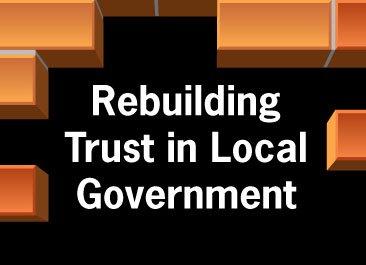 Thomas E. Shanks, Ph.D., is a former professor at the University of Santa Clara and president of the Ethics Company; he can be reached at teshanks@sbcglobal.net.

“Learn from yesterday, live for today, hope for tomorrow. The important thing is not to stop questioning.”
— Albert Einstein

City officials throughout California have met the extraordinary economic and political challenges of the past few years with courage and a commitment to serving the people’s best interests.

Policy-makers and staff in almost every city have worked hard to do their best for their residents and businesses under extremely difficult circumstances. They have stretched limited resources to maintain high quality services, met the needs of a diverse and often divided public, and dealt with issues of employee layoffs, morale and compensation. They have made difficult decisions, taken pay cuts and balanced their budgets. Consequently my trust of city government is stronger than ever.

That level of trust, however, is shared by only one in three Californians, according to a May 2011 statewide survey conducted by the Public Policy Institute of California. Only 35 percent of Californians say they trust local government to do what is right — just about always (6 percent) or most of the time (29 percent).

During the past two years most Californians’ trust of local government has declined to what may very well be its lowest level ever. Six in 10 expect local government to do what is right only some of the time (58 percent) or never (5 percent). These perceptions are widely shared by voters and non-voters across geographical regions as well as political affiliation, ethnic background, age, gender and income groups.

Cities must take bold action to stop the downward slide and begin to rebuild the trust that is necessary for democratic government to function.

Most of the time when we talk about “public trust” we are talking about the people’s belief that their local government works hard at all times, in public and in private, with competence, integrity and commitment to serve only the best interests of all the people of the city. It is the public’s confident reliance that “city officials really do represent me and are trying to act in my best interests.”

What Is Required to Build Public Trust

Surveys conducted in the City of Santa Clara in 2006 (available online) identified the key requirements for public trust.

The first requirement is that city officials follow the law, but compliance with the law is the minimal expectation. Public trust requires more than just following the law. The other requirements are related to public perception, and such perceptions are resistant to public relations or spin. They require concrete action first and then clear communication about the steps taken.

The Santa Clara surveys also identified the leadership behaviors that build trust. In order of importance, trustworthy leaders tell the truth, do what they say they will do, make prudent financial decisions, act with integrity, show respect to all, do the right thing in public and in private, take responsibility for actions and mistakes, and make impartial decisions that people can verify as impartial.

Most city officials act and think this way, but the public rarely hears or sees it. Trust grows when the public has the opportunity to hear decision-makers working through different options, weighing values, considering the needs and viewpoints of all stakeholders, explaining how they see responsibility or integrity in this or that choice, why they believe this is fair, how they plan to reduce the harm of a choice and so on.

Here are some ways to communicate that help build public trust.

Build active listening skills. Council members and staff can show deep regard for constituents by asking a question for clarification or by indicating how a resident’s opinion was considered in the final decision.

Make these questions a regular part of the public discussion: Why do we believe this action deserves the trust of our public? Why is this action the right thing to do? In what ways does this action align with our city’s core values?

For important decisions, include a “values analysis” as part of the staff recommendation. The staff still makes a technical recommendation, but also lays out for the council how each of the options under consideration may impact stakeholders, advance or hinder the agency’s core values and lead to unintended consequences. The goal is to inform the council members so they know what is at stake in choosing one option over another.

The public may not agree with the final outcome, but they can trust that their elected decision-makers considered all options in good faith. That is my hope for tomorrow.