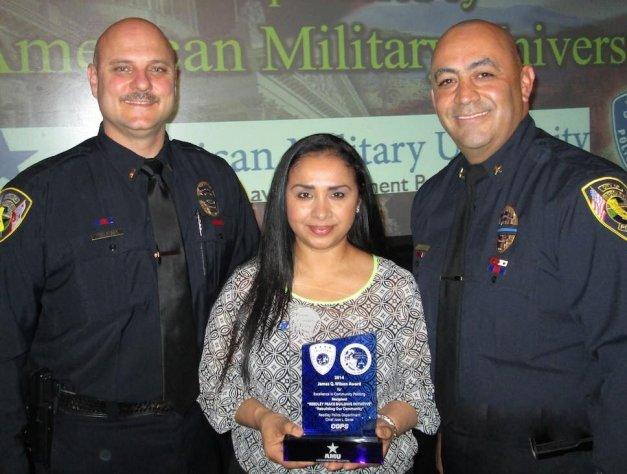 Reedley (pop. 25,122) lies in the heart of the San Joaquin Valley’s agricultural country. Decades of caring leadership and community partnerships have shaped the city into an attractive and welcoming center amid farmland, vineyards and orchards.

Reedley experienced a sharp rise in violent gang crimes in 2009–10, accompanied by an increase in juvenile offenses that appeared gang related. These offenses added to the caseload of an already overworked criminal justice system. Gang-related crime and gang activity were also reflected in an increase in suspensions and expulsions from Reedley schools and other schools in the Kings Canyon Unified School District.

The Community-Oriented Policing Services (COPS) philosophy guides Reedley’s criminal justice process. This approach recognizes that a problem as endemic and far-reaching as gang-related crime has many sources, all of which need to be addressed to accomplish real change. The entire community was concerned about the upsurge of juvenile crime and the waste of young lives in 2009–10, so it was a natural step for the Reedley Police Department to introduce a program for young offenders that explored alternative solutions to instances of juvenile crime.

The department launched the Reedley Peace Building Initiative (RPBI) in 2011 as a way for “the community to take care of community.” The program brings together the victim of a crime and the offender with a qualified conflict mediator to help resolve the conflict and reach agreement on how to make amends for the damages caused by the offense. The goal of the process is to awaken awareness of accountability and ultimately to redirect a juvenile offender by providing mentoring and training at the same time that the youth in some way makes restitution for the offense. In this way, it is hoped that the victim receives recognition, the relationship between victim and offender is repaired and the offender makes amends without incurring a permanent criminal record.

The RPBI is modeled on the Victim Offender Reconciliation Program developed through Fresno Pacific University. The nonprofit Mennonite Central Committee West Coast Office partnered with the city for the RPBI launch and provided insight and leadership; its Restorative Justice Director John Swenning acts as RPBI’s restorative justice coordinator. The program relies on volunteer mediators for its outreach, and this partnership allowed for broad participation with the faith-based community.

Additional community partnerships followed, with the Reedley Rotary Club, the Kiwanis, the Reedley Peace Center, Reedley College Upward Bound, Adventist Health, the Reedley Chamber of Commerce and the Reedley Downtown Association among those who signed up to provide volunteer mediators. Regional supporters include Fresno Pacific University, the Marjaree Mason Center and the Fresno County District Attorney’s Office. Over 30 additional partners have offered to support the program by providing opportunities for community service.

In its first three years the program trained more than 75 community mediators who successfully resolved over 210 misdemeanor cases and conflicts. “Out of school” suspensions at Reedley High School dropped 42 percent in one year and expulsions that year decreased by 87 percent. Of the more than 210 juvenile offenders mentored during this period, only nine have reoffended.

How did the program achieve this? The first steps were to integrate the RPBI as a core program within the Reedley Police Department and to give officers in contact with a juvenile misdemeanor crime the authority to direct the case to the RPBI program rather than to the court system. A Restorative Justice Committee leads the program, which is coordinated by the support services commander (a police lieutenant). An administrative sergeant monitors the monthly caseload. A victim services community service officer and the restorative justice coordinator determine which cases are eligible for mediation and select the volunteer mediator. The mediators receive 16 hours of training in conflict resolution and mediation skills; they are responsible for the mediation process and drafting the resolution contract between the offender and the victim. A twofold process separates cases of offenses occurring on the street from those happening on a school campus. This allows for separate management of certain issues arising from community offenses at the same time that it allows school officials to play a direct role in determining outcomes.

The RPBI has reduced the number of juvenile cases directed to the criminal justice system, and its effects are being felt throughout the community:

Simple statistics illustrate the program’s greatest impact. Previously 42 children in a given year could find themselves with criminal records and possibly incarcerated; today that number is down to 12.

“Restorative justice provides a way to build relationships and trust through communication, accountability and honesty,” says Restorative Justice Coordinator John Swenning. “The RPBI continues to save money, save time and save lives.”

The RPBI has changed lives because the community was willing to try something different and believe in its children. “This program is about giving our kids a second chance and creating a healthier community,” says Reedley Police Chief Joe Garza. “The opportunities that arise when someone can take ownership of an offense and still be accepted into the community help to build confidence and a sense of appreciation in our young people.”

To learn more about the program, visit http://rpbi-reedley.org.

Photo Credit: Courtesy of City of Reedley and League of California Cities