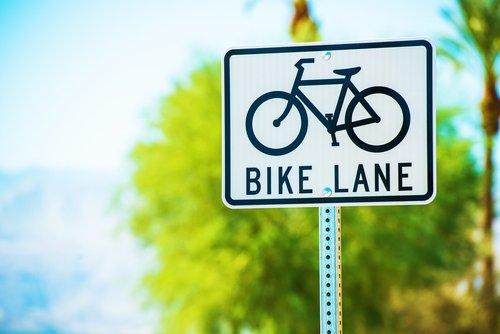 More than 225,000 Californians were injured in traffic collisions in 2012, according to the state Office of Traffic Safety. Local officials who want to help prevent such accidents in their communities are looking at road diets as a useful tool.

What is a Road Diet?

Road diets remove motor vehicle lanes to create space for bicycle lanes, wider sidewalks, bulb-outs and safer parking. Essentially road diets make streets “complete” — designed to accommodate all potential users including bicyclists, drivers, transit riders and pedestrians of every age and ability. (For more on complete streets see www.ca-ilg.org/srts-toolkit/complete-streets.) Typically, a road diet reduces a four-lane road to three lanes: one lane in each direction and a center turn lane. This reduces the number of “crash points” where accidents are most likely to occur.

Local jurisdictions, both statewide and nationwide, that have adopted road diets in their communities have seen numerous benefits, including increased safety for all roadway users, street beautification and greater numbers of residents using alternative modes of transportation.

Studies point to the many advantages of implementing road diets, including increased economic activity without reduced road capacity. The U.S. Department of Transportation (DOT) found that road diets can reduce traffic accidents by an average of 29 percent — and in smaller towns can cut crashes nearly in half. Road diets reduce vehicle speeds and minimize conflicts, thus making other modes of transportation more attractive. Reducing lanes allows for wider bike lanes and bulb-outs, which reduce the crossing distance between sidewalks, and makes cycling and walking safer.

In addition to increased road safety, a larger number of pedestrians and cyclists can be good for the economic vitality of your city. According to The Economic Benefits of Bicycling, a 2008 report published by Portland State University, customers who arrive by bike to shop spend 24 percent more per month than those who arrive by car. A study of Toronto merchants found that people arriving on foot or by bicycle make more visits to local merchants and spend more money than their counterparts who arrive in cars.

Road diets can also be cost-effective. When combined with regular street maintenance, road diets can cost little more than the paint used to restripe the road. Eric Jaffe, author and contributing writer to The Atlantic’s CityLab website, says road diets “are as cheap and cost-effective as infrastructure improvements get.” Improvements can be made even when lanes are not removed; just narrowing traffic lanes can create better bike lanes.

But will road diets reduce roadway capacity and increase traffic? The Federal Highway Administration has determined that road diets do not cause congestion on roads that carry fewer than 20,000 cars daily. Adding center-turn lanes actually increases capacity, because traffic is not stopped for vehicles waiting to make left turns.

How Can We Implement Road Diets in Our Communities?

Recently California has made strides to give local governments more control of active transportation projects, such as road diets, in their jurisdictions. For example, Governor Jerry Brown signed two bills in 2014 that will ease implementation of road diets in cities throughout the state. SB 1183 (Chapter 516, Statutes of 2014) introduced a potential stable funding source for cities to invest in their own active transportation projects. This law allows local jurisdictions to propose a small vehicle registration fee on local ballots to fund bike paths and trails. The fee is capped at $5 and must be approved by two-thirds of the jurisdiction’s voters.

Last year, AB 1193 (Chapter 495, Statutes of 2014) was signed into law as well. It creates “protected bikeways” and requires Caltrans to develop design standards for these bikeways. Additionally, it eliminates the requirement that local governments apply for design exemptions through Caltrans for protected bikeways. These exemptions can often be very costly and difficult to obtain. This legislation allows local jurisdictions to build protected bike lanes without first needing to consult Caltrans.

In addition to these new laws that provide funding sources and ease the regulatory environment, the DOT is launching an 18-month campaign to improve road safety nationwide and combat increasing motor vehicle fatalities and injuries. This initiative will promote design improvements to ensure safer roadways, including creating safer routes for pedestrians and cyclists. The DOT will develop related resources, including a guide to assist local governments in implementing road diets.

Public engagement can help facilitate the implementation of such a policy change in your city. Communicating with and engaging your community early and often in the process fosters greater understanding of the policy issues at hand and increases buy-in for the project. The Institute for Local Government offers multiple resources on the basics of — and innovative approaches to — engaging your community. Visit www.ca-ilg.org/public-engagement for more information.

Where Are Road Diets Being Used in California?

Many cities across the state have successfully adopted road diets, including San Francisco, Fresno and Davis.

The City of San Francisco temporarily implemented a road diet on Valencia Street for a one-year period. The results were then presented at public hearings, and the board of supervisors voted to continue the project. If it had been rejected, the street would have been returned to its original four-lane configuration. Before work started work, the city collected baseline data so any impact on collisions and traffic volumes could be evaluated. 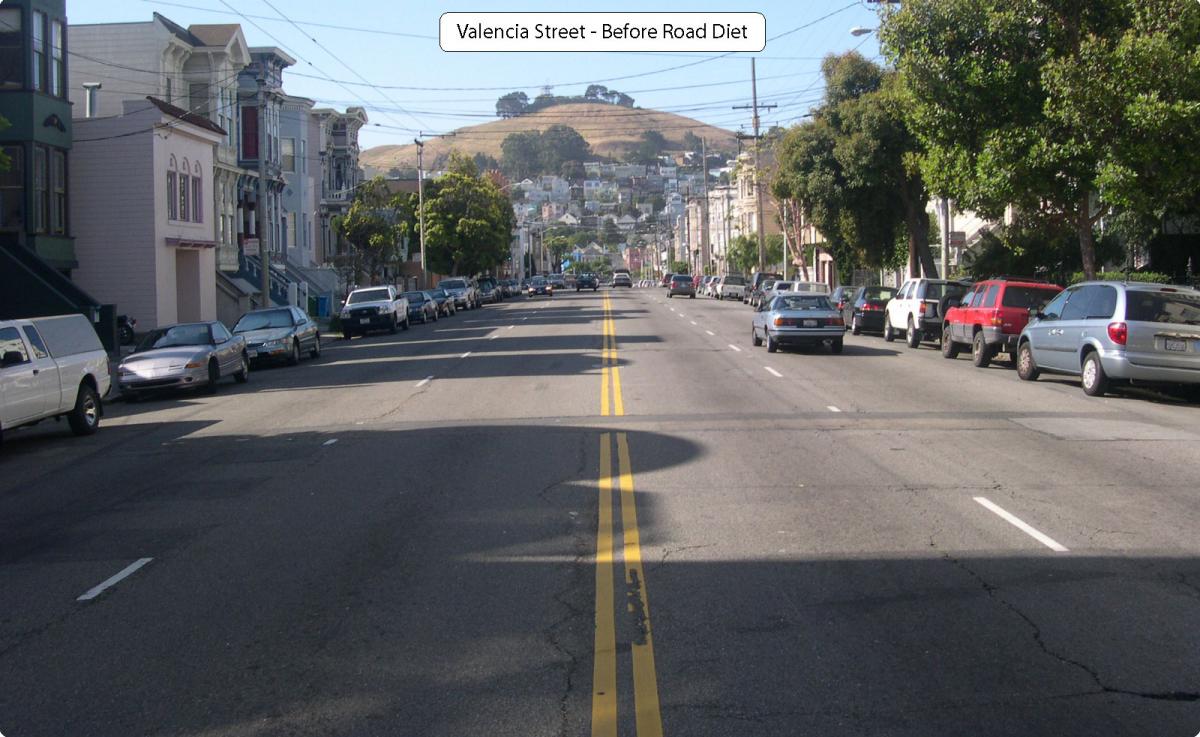 In the year after implementation, the Valencia Street road diet resulted in a 20 percent decrease in total collisions, including a 36 percent reduction in collisions involving pedestrians. The number of bicycle collisions increased, but that increase was far outpaced by the increase in the number of bicyclists (140 percent). Although the project was initially controversial, ultimately it was considered an overall success. The merchants’ association has voiced its support for the road diet, as it “has made the road seem like more of a destination than an arterial.” City staff cites the public outreach as critical to the project’s success, as it gave stakeholders many opportunities to be involved in the process.

“Before the Valencia Street project was implemented, the community was split between excitement and fear of what might result,” says Michael Sallaberry, transportation engineer for  the San Francisco Municipal Transportation Agency. “After it was implemented, it was embraced by nearly everyone as a success — not only by people who ride bikes, but those who walk, businesses along the street and the neighborhood in general.” 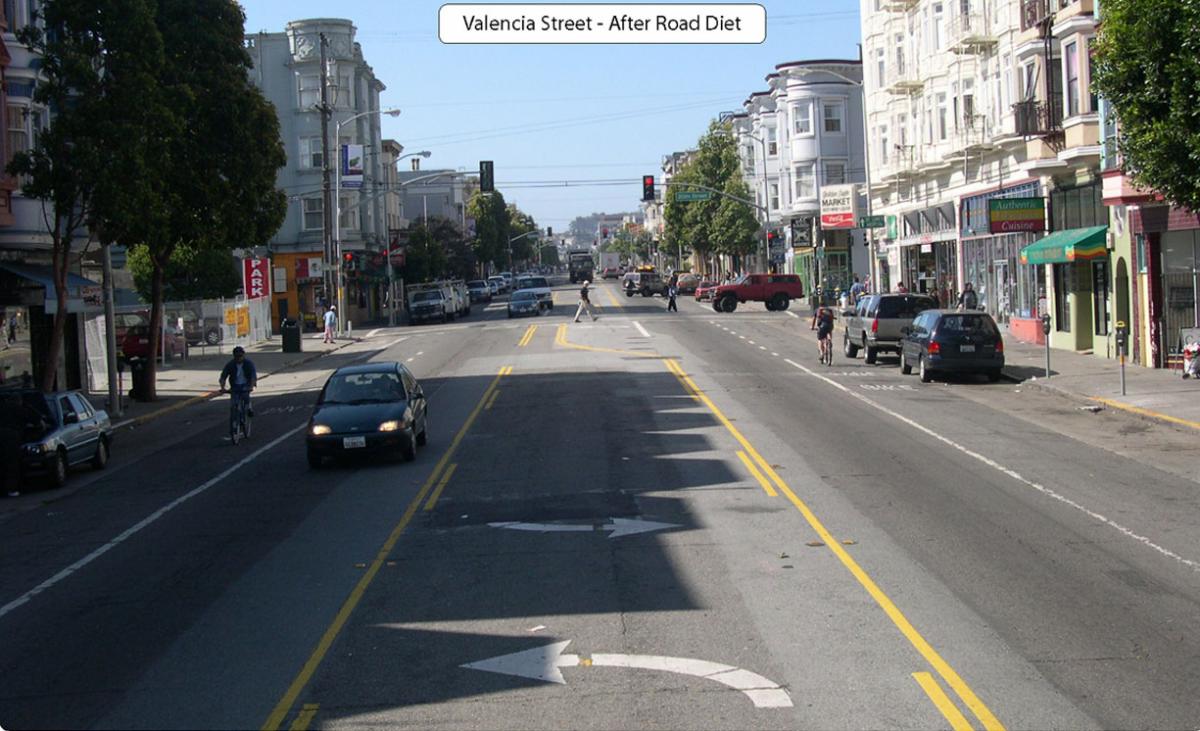 The City of Fresno, in conjunction with the City of Clovis and Fresno County, has implemented multiple road diets. Fresno County voters passed Measure C, a half-cent sales tax aimed at improving the transportation systems throughout the county and all the cities in the county in 1986. By 2010, the City of Fresno completed its Bicycle Master Plan, as required by the measure, and led the nation in installing bike facilities that year. One component of this plan includes implementing road diets. The city evaluates the roadway and conducts a traffic engineering analysis before determining if a road diet is an appropriate option. Staff has found road diets to be an especially viable option in the city’s older sections that were not designed to accommodate bike lanes. Road diets decrease the need to remove residential parking, purchase front yards or widen the street and relocate curbs and gutters.

The Davis City Council in 2009 endorsed a reconfiguration for Fifth Street, a major arterial that provides crosstown access to the downtown core and UC Davis. As part of the design phase, the city conducted a series of public workshops to gather community input. The redesign included changing the roadway from two vehicle lanes in each direction to one vehicle lane and a bike lane, plus turning lanes. The project also added marked crosswalks, more street lights and ADA-compliant ramps. In 2010 the city received a Sacramento Area Council of Governments (SACOG) Community Design Grant and in 2012, it received a Highway Safety Improvement Program Grant earmarked for pedestrian safety improvements. Construction began in fall 2013, and the final phase was completed in late 2014.

“Davis’ Fifth Street project was a long time in the making, as there were many concerns in the community about whether it would cause greater traffic congestion along the already busy corridor,” says Mayor Dan Wolk. “Since its implementation, it has become a widely used path of travel for cyclists, and vehicular travel does not seem to be too adversely affected. We’re pleased that the project allows Fifth Street to tie in to the city’s extensive bike path and lane network and provides a much safer cycling route for people to get to and from the UC Davis campus and our active downtown.”

Road diets offer cities a cost-effective way to reduce traffic accidents, make walking and cycling safer, stimulate economic activity and encourage residents to use alternative modes of transportation instead of driving. The successful use of road diets in cities of all sizes demonstrates the efficacy of this approach. City officials looking for ways to enhance the quality of life in their community now have another tool to consider.