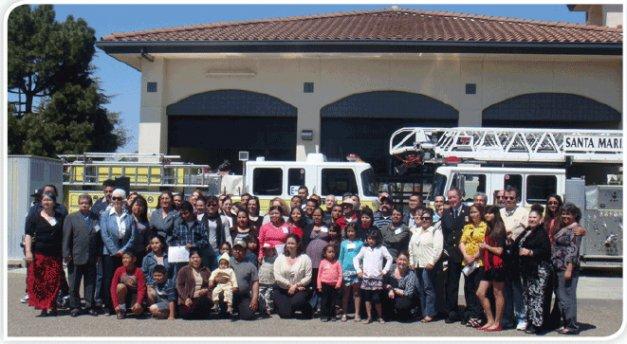 The City of Santa Maria won the 2013 Helen Putnam Award for Excellence in the Public Safety category. For more about the award program, visit www.helenputnam.org.

The City of Santa Maria (pop. 100,306) lies southeast of San Luis Obispo and just north of Vandenberg Air Force Base in Santa Barbara County. Nearly two-thirds of Santa Maria residents speak a language other than English at home, according to the 2010 census, and more than 70 percent identify themselves as Hispanic/Latino. English literacy rates are low. Santa Maria’s public safety staff recognized that many residents did not have a grasp of basic emergency and disaster knowledge.

Traditional outreach methods targeting Spanish-speaking residents had not worked. “One of the biggest obstacles to involving many in the Latino community is their fear of first responders and distrust of government or people in positions of authority, stemming from past experiences in their countries of origin,” says Fire Chief Dan Orr. “This fear and distrust has often resulted in few requests for help from them during emergencies.” These cultural and language barriers profoundly affected the city’s ability to educate the community about emergency preparedness.

So Santa Maria collaborated with the Orfalea Foundation’s Aware & Prepare Initiative, starting in 2011, to develop a program that teaches disaster readiness using an innovative, low-cost, grassroots approach. The program, customized to meet the needs of Spanish-speaking groups, is called Listos, which means “ready” in Spanish.

Listos emphasizes sharing preparedness skills and information with family and friends, using a culturally appropriate curriculum that overcomes language and trust barriers and strengthens relationships between first responders and the community.

The Listos curriculum condenses the traditional Community Emergency Response Team (CERT) eight-week course into a four-week, 12-hour course. During the training session, Listos staff explains the role of firefighters and introduces Fire Department personnel to the community in a friendly, low-key and nonthreatening way. Participants report that their fear of first responders, which many in the Latino community cited as the single main factor keeping them from asking for help during emergencies, significantly diminishes after they attend their first Listos class.

During the classes, Listos participants learn how to use a fire extinguisher, make family communication and reunification plans, treat the injured and shut off utilities.

Listos participants quickly learn that the city’s scarce emergency resources mean that residents must take responsibility for their own well-being in a disaster. On any given day, less than two dozen city firefighters and police officers are working on a single shift. Consequently, the city’s limited resources will be overwhelmed in a disaster if community members are unprepared.

Food plays an important part in Listos. During a break halfway through class the participants and instructors share a potluck-style meal that encourages free-flowing discussion.

Listos volunteers complete a 24-hour Train-the-Trainer course beyond the standard 12-hour course for students. Ongoing training and supervision occur at a monthly meeting and volunteers have access to Fire Department employees via phone. Chief Orr also gives the Listos volunteers group his personal cell phone number; 20 volunteers have it, some for two years or more, and he has received only appropriate calls.

The Listos volunteers also partner with the local ambulance company to teach hands-only cardio-pulmonary resuscitation (CPR) to more than 2,000 residents in less than two months.

“Because the Listos volunteers have been so active in the community and are easily distinguishable with their bright red shirts, the community recognizes them and trusts them,” says Gracie Huerta, who spearheaded the program’s development in Santa Maria. “So they are willing to approach volunteers at the swap meet or laundromat where they have set up booths to teach hands-only CPR. This is something that a ‘badged’ staff member might not be able to do as easily.”

Between February 2012 and February 2013, Listos volunteers donated more than 1,700 hours of service to the Santa Maria community. Their activities included:

The program has stimulated public dialogue about disaster awareness. This has generated increased media coverage of Listos and promotes continued interest in its classes.

“The most common feedback after a class is ‘we want more,’” says Huerta. “Listos not only teaches disaster preparedness, it is also building stronger and more resilient communities. Listos is changing the lives of the participants, their families and the community.”