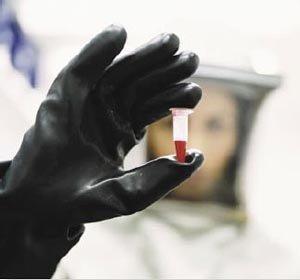 For five seasons of Fox’s television series “24,” protagonist Jack Bauer and his colleagues at the Counter-Terrorism Unit have struggled to protect the United States from threats ranging from bio-terrorism to nuclear attack. This program may be great entertainment, but it also reflects real threats that we face in the world today.

Unlike nuclear or biological weapons, chemical nerve agents are relatively easy and inexpensive to produce and deploy. These poisons, which include organophosphorous insecticides such as malathion, parathion and diazinon, are readily available in our communities and travel via road and rail through cities every day.

Chemical nerve agents have already been used successfully in terrorist attacks. In 1995, members of the Japanese cult Aum Shinrikyo released the nerve agent sarin into a Tokyo subway, killing 12 people and injuring 5,500 others. The year be- fore, members of the same cult released sarin into a residential apartment building in Matsumoto, Japan, killing seven people and injuring more than 200.

A 2004 Homeland Security Council report outlined a terrorist attack scenario in which a chemical nerve agent release in three large office buildings could kill 95 percent of the occupants, the equivalent of nearly 6,000 people. The report estimates that first responders would arrive on the scene in 10–15 minutes. The response is likely to be too little, too late, given the rapidity of nerve agent poisoning symptom onset and the logistical challenges of providing immediate medical assistance to large numbers of victims.

In the event of a chemical nerve agent attack on a public transit system, indoor stadium, amusement park or office building, individuals who have been poisoned may have only minutes to receive the antidote. Although U.S. emergency responders have access to auto-injectors that contain the antidotes for chemical nerve agent poisoning, in many cities they may have only enough antidotes to treat themselves and won’t be able to treat victims in time.

The Hurricane Katrina disaster underscored the fact that local emergency res-ponders must be prepared to manage a disaster for 24–72 hours before federal assistance arrives. Unfortunately, most state and local emergency management agencies do not have a standardized response protocol for a chemical nerve agent attack. Most are depending on federal government stockpiles of antidotes, but those caches will not be immediately available and may not be delivered for 12 or more hours. And most do not have adequate supplies of infant and pediatric dosages.

Even before Sept. 11,2001,New York City implemented a layered inventory and response system. Every ambulance in the city carries chemical nerve agent antidote kits as standard equipment. Victims who are most severely affected by a nerve agent would receive their initial antidote treatment from the first ambulances on the scene. Logistical support units would provide the next layer of assistance, followed by pre-positioned caches of antidotes. These local layers of reinforcement would be utilized before federal help, such as chem-packs supplied by the Centers for Disease Control and Prevention, would
be required.

Federal Grants Can Pay the Way

State and local emergency response agencies have the opportunity to purchase chemical nerve agent antidote kits at no cost through federal Office of Domestic Preparedness grants. It’s important for agency leaders to partner with other state and local government officials to assess their risk for a chemical nerve agent emergency, and develop standard response protocols similar to those in place in New York City. The onset of an emergency is not the time to realize you don’t have a plan. And Hollywood heroes like Jack Bauer won’t be there to protect you.

For more information on first responder grants, visit the Department of Homeland Security website at www.ojp.usdoj.gov/odp.