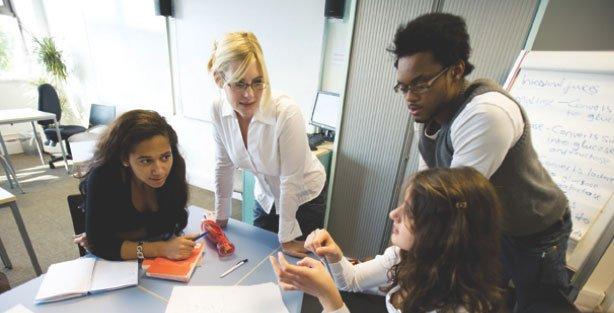 Anne C. Fairchild is the water quality services laboratory manager for the City of San Luis Obispo’s Utilities Department. She can be reached at afairchi@slocity.org.

What began as a courtesy lecture about the advantages of a career in water quality evolved into an internship program that has resolved staffing challenges for the City of San Luis Obispo’s Utilities Department.

For a couple of years, my colleague and I had been struggling in our water quality laboratory to comply with state- and federally mandated daily water quality analyses. A statewide shortage of trained and certified personnel and limited funding and recruiting resources resulted in exhausting working conditions for our two-member team. During that time, I gave a lecture to an advanced-level microbiology class at neighboring California Polytechnic State University and soon after received phone calls from several students who asked about training opportunities.

We quickly organized a structured internship program — preceded by a stringent screening process — that was an instant success and has even expanded to serve other divisions in the department. First we identified the core knowledge, skills and abilities (KSAs) an intern would need to be successful in the lab jobs, and then set up job-shadowing and a constant feedback loop for each student. These elements were the core program components; we call them “the recipe.”

But in addition to the recipe, carefully screening the interested candidates proved to be equally important. Setting up each internship takes a tremendous amount of our time. When someone expresses an interest, we have to make sure his or her level of commitment is consistent with ours. First we ask for a résumé. Then, in a separate step, we ask for three goals the applicant would like to achieve during the internship. The goals help the applicant buy into the internship process and offer some control and something tangible for the student to work toward. Then we have the student come up with his or her own schedule and timeline.

If they make it through the screening process, we know they’re serious.

The program takes about 80 hours. Interns put in as much time as they can, generally between 10 and 40 hours a week. The first two interns to com plete the program in 1995 immediately relieved our work burden and helped us meet mandates. Within six months, they could practically run the show.

The water reclamation facility staff liked what they heard about our program and decided to develop an internship program to address their own needs: integrating a handful of new employees who were changing careers and filling the vacancies left by retiring Baby Boomers. Facility managers followed the recipe and identi fied the top 10 KSAs and created job- shadowing and a feedback loop. Soon they successfully promoted several employees into new careers and open positions. As in the lab, reclamation facility interns were quickly able to help staff meet heavy workload demands.

More recently, the Utilities Depart ment examined its demographics, which revealed that within 10 years, some 65 percent of its staff will be eligible for retirement. Concerned about the loss of institutional knowledge and expertise, staff wondered if the internship recipe would be transferable to other utilities divisions; would it enable current staff to mentor other employees to succeed retiring Boomers, retain that institutional knowledge and expertise — and still provide uninterrupted service to the community? To find out, staff hired a former reclamation facility intern as a consultant for a divisionwide pilot pro gram. The intern-consultant spent two or three weeks in each of the eight divisions identifying and prioritizing KSAs and successfully developed training guidelines for future interns. Now other divisions, from administration to wastewater collections to water treatment, are organizing internships for succession planning and advancement. Two staff members are now rotating through such an internship.

Since 1995, more than 90 interns have completed the laboratory and operations programs. Eighty percent of the interns went on to work in a water quality- related field, including 17 that we hired over the years to fill both permanent and temporary positions. The lab currently has three interns, and the reclamation facility has four.

The program’s benefits have been far reaching. Interns benefit from on-the-job training, professional certifications and direct work experience with potential future employers. The city benefits by being able to deliver uninterrupted service in spite of limited staffing conditions. Equally important, we now have access to an ongoing pool of highly trained and certified individuals who can make smooth transitions from school into the work force and succeed employees who are approaching retirement. Hiring interns and qualified candidates also saves us money and re sources that we formerly spent recruiting and training less qualified individuals.

As our Utilities Director Carrie Mattingly said, “The rewards to the city and the community, as well as to the interns, far outweigh the time and effort that went into developing the internship program. As we continue to use the internship program, we expect it to be an effective means to encourage current city employees to pursue promotional and development opportunities and to support them in their new roles, paving the way for succession planning as Baby Boomers retire.”