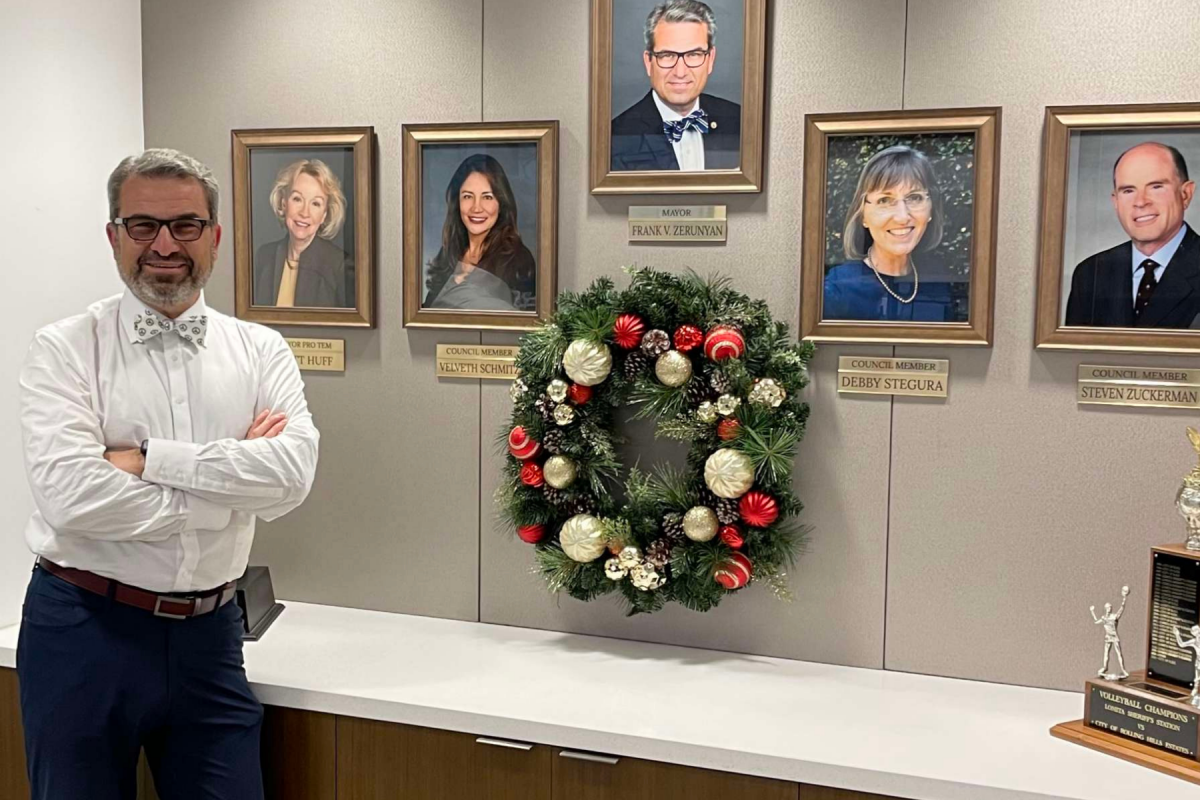 The value of local public service

Frank V. Zerunyan, J.D., LL.D. (hc) is the mayor of Rolling Hills Estates, professor of the practice of governance at the Sol Price School of Public Policy at USC, and director of executive education at the USC Price Bedrosian Center on Governance. He is also the Director and University Liaison to the Reserve Officers Training Corps and Nautical Science Programs. He can be reached at frank.zerunyan@usc.edu.

Editor’s Note: As we reflect on the many projects made possible by the American Rescue Plan Act this month, it is important to consider that which has incalculable value: public service. Put simply, local government is where the rubber meets the road and policy becomes action. This article by Frank V. Zerunyan, Mayor of Rolling Hills Estates and Professor at the USC Sol Price School of Public Policy, reflects on the unique, vital role that city officials play in keeping our democracy and communities healthy. It originally appeared in USC Price Faculty Perspectives and is an excellent companion piece to the municipal finance edition of Western City. We are grateful for the permission to republish it here.

As I begin my 14th year of academic service at one of the best research universities and highly ranked public affairs schools in the nation, I want to reflect on the value of local public service as the antidote to many wicked challenges facing us today.

Democracy’s hope is in cities

Several years ago, I shared the podium at Fordham Law School, New York, with professor Barber, who wrote a book entitled “If Mayors Ruled the World.” I was speaking at Fordham about my then-forthcoming journal article “The Evolution of the Municipal Corporation and the Innovations of Local Governance in California to Preserve Home Rule and Local Control.” Professor Barber observed then and in his book, “We have come full circle in the city’s epic history. Humankind began its march to politics and civilization in the polis — the township…The city, always the human habitat of first resort, has in today’s globalized world once again become democracy’s best hope.”

The former mayor of Denver, Wellington E. Webb, said, “The 19th century was a century of empires, the 20th century was a century of nation-states. The 21st century will be a century of cities.” So true today that a coalition of business, government, and academic colleagues have joined together to survey cities with diverse populations and economies to design an evidence-based roadmap to post-pandemic urban resilience and sustainability. As a member of the board of advisors for this worldwide endeavor, I see and appreciate the value of local public service and leadership.

I always tell my students that there is no greater joy or honor than serving your fellow human. In my case, this is my 4th time as Mayor of Rolling Hills Estates, California, in my 23rd year of serving my local community and 19th as an elected, including during this time a few leadership roles as president of California Contract Cities representing over 7 million Californians and vice president of the California Medical Board as a gubernatorial appointee representing 38 million medical consumers of the state.

Public service is not about collecting a paycheck from the government. Helping your fellow human is an activity beyond self-interest. For more than eight years now, I have had the pleasure of collaborating with the United Nations Department of Economic and Social Affairs and, specifically, with the Innovation Branch for public service. I taught in every urban continent except Australia.

“Public service is not about collecting a paycheck from the government. Helping your fellow human is an activity beyond self-interest.”

My primary function has been to explain the value of local public service and collaboration in typically centralized governments where hierarchical bureaucracies create public bureaucrats rather than servants. I recall my response to a police chief in a capacity-building workshop in one of the former Soviet Republics. He was complaining of nepotism and bribes by his cops on the beat. He described the cop’s favoritism towards his sister-in-law and his acceptance of bribes from others. I said to him that such conduct is a critical misunderstanding of the meaning of public office. I said, “when he wears that uniform and badge, every citizen is his sister-in-law.”

Governance at the local level

Some of us wear a uniform and/or take an oath of office to serve. We recognize and respect the accompanying responsibility. In a world of constant competition for power and influence, we govern through values of collaboration and compassion. These values are more focused at the local level, where we are the closest to the people we serve. We serve to facilitate neighbors helping neighbors without the divisions imposed on us by political interests and the media, which thrive on accentuating differences. Professor Barber’s confidence in mayors and cities is not misplaced.

Focusing on our shortcomings at the national level, we are losing sight of our progress and what we do exceptionally well in local communities. In my 23 years of serving at the local level, neither race, ethnicity, religion, or political ideology has affected my policy decision-making for my community, region, or state. Mayor Bloomberg accurately reflected that while the American government is “just unable to do anything…the mayors of this country still have to deal with the real world.” Some political scientists and politicians pontificate and agitate, “mayors pick up the garbage.” I presume he meant literally and figuratively.

“In a world of constant competition for power and influence, [local officials] govern through values of collaboration and compassion.”

As competitive as we are, our humanity as an impulse to lend a helping hand is second to none. This impulse exhibits itself at the local level, often during disasters. I recently wrote an article on disaster management planning, published in Apolitical.co, where I highlighted the importance of local “facilitative platform for a limitless number of actors coming together for the greater good.” This collaboration is not just a theory but a reality that we witnessed in Florida and Texas in the aftermath of hurricanes, where neighborly acts of human kindness were on display for all to see and experience.

I am not naïve to not observe bad actors in local governments. Sadly, there will be evil as long as there are power hungry living and breathing humans in this world. Local governments are not immune. We must collectively fight this evil in all forms. But let us not confuse this small number of evil-doers with the overwhelming majority of good.

President Kennedy once said, “If a free society cannot help the many who are poor, it cannot save the few who are rich.” Martin Luther King alluded to a “promissory note to which every American was to fall heir.” These calls to unity and values are what we generally practice at the local level. We serve our communities for the greater good without regard to divisions or differences. I say, generally, because, sadly, some continue to push the political ideology of divisions to my colleagues in local governance today. Some even practice it causing more harm than good.

Today’s ideological less tolerant narratives and fights simply do not work at the implementation level. They erase a sense of unity in communities and complicate governance, delivering much less than the quality product our residents deserve. For example, California’s ideologues and political class cannot solve the state’s housing affordability crisis by pouring concrete all over California. Those sworn to enforce our laws cannot solve incarceration challenges by skyrocketing crime rates in our communities.

“We serve our communities for the greater good without regard to divisions or differences.”

I predict that the love of local public service, the local reality, and the importance of delivering results will promote collaboration in governance. The newly elected and sworn Mayor of New York, Eric Adams, alluded to this reality in his first address. Mayor Adams said, “we must also put down the weapons of rhetoric and reach results. The ideological wars of our recent past are more costly now than ever as we face such serious challenges.” He rightfully added, “these fights divide us by forcing us to make false choices rather than working together on practical solutions.”

As we begin 2022, let us focus on the good and what unites us. In the early 18th century, which remains applicable today, Montesquieu wrote, “Le mieux est le mortel ennemi du bien.” (The best is the mortal enemy of the good). If cities succumb to the hatred exhibited by the ideologues and political classes, we will truly see the end of hope for democracy.