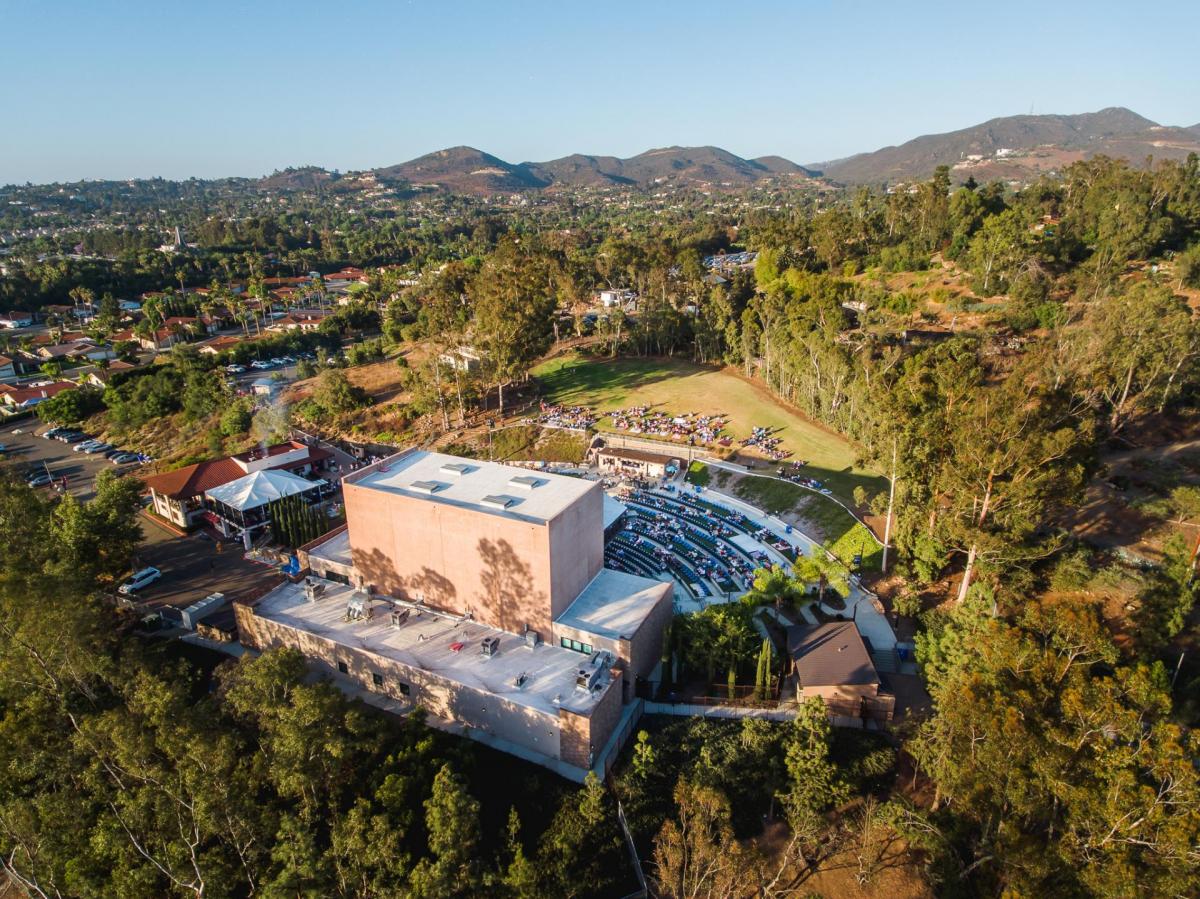 Carolina Alban-Stoughton is a senior content strategist for Calsense; she can be reached at media@calsense.com.

Not too long ago, Yale Jeffery and his team started noticing something weird, if not a little disturbing: huge, mature trees, dying for no obvious reason. That was a problem. Jeffery is the public works supervisor for parks at the city of Vista. Keeping those trees alive and healthy is kind of his responsibility.

So, Jeffery and his colleagues started looking for clues as to what might be behind the spate of unexpected tree losses. Examining historical data, weather, and irrigation patterns, they discovered that the major contributing factor appeared to be the water restrictions that had been put into place some half a decade earlier.

“That was around the time we had the last big drought,” Jeffery explained. “The Vista parks team was obliged for a period to stop watering completely … It was understandable, but we’re now paying the price. Trees react differently to changes in their water supply, and some do better than others. In this case, a sudden complete cut in irrigation has proven catastrophic.” 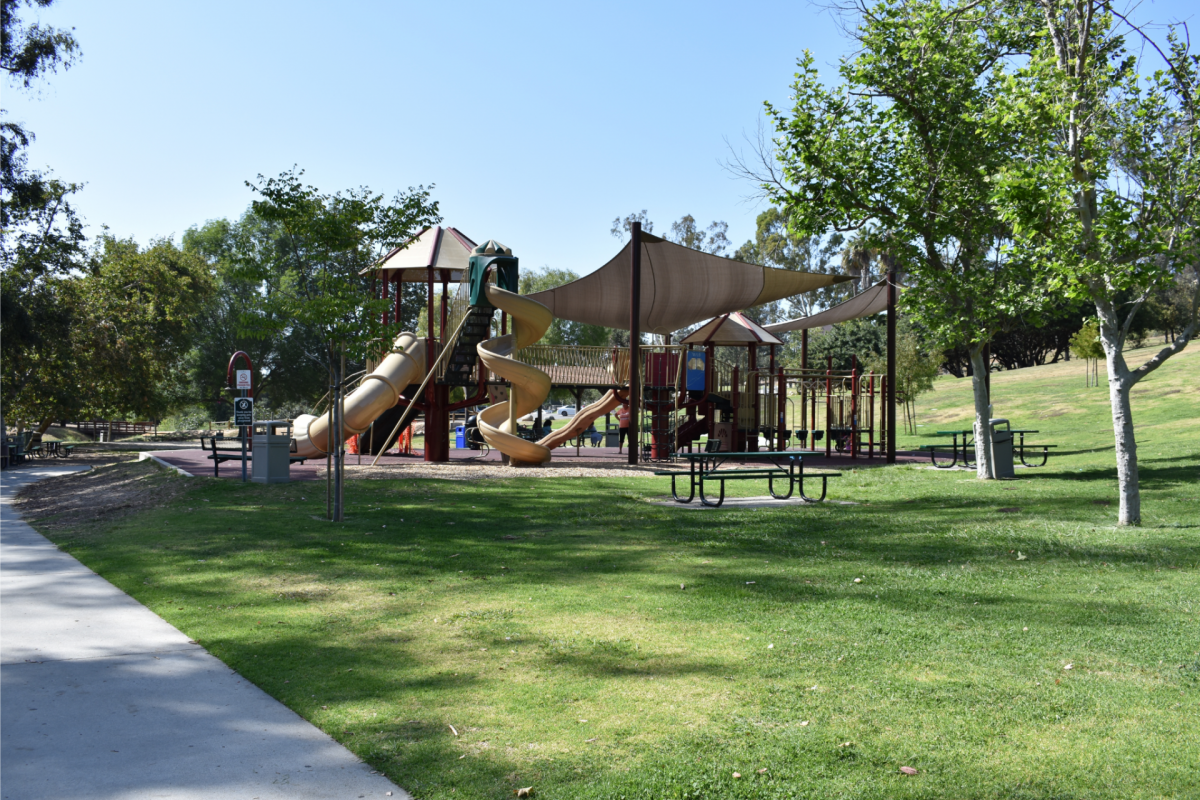 Vista is an outdoorsy place. There are about 150 acres of open public green space serving the city’s 98,381 residents. This includes both natural areas and a trail system, as well as the Alta Vista Botanical Gardens, the Moonlight Amphitheatre, recreational areas, and Brengle Terrace Park. The latter makes up about half of the city’s total green space and hosts the annual Highland Games, which sees bekilted competitors tossing cabers and herding sheepdogs on the park’s hillsides.

Providing and caring for green spaces — both parks and more natural areas — is a core component of the city’s 360-degree environmental philosophy.

“We’re huge on planting new trees,” Jeffery said. “With new developments, you can often lose green space, so the city council sees it as an important priority to provide that public space where people can have a birthday party, a family reunion, or an outdoor wedding.”

One of the ways the city accomplishes this is by actively purchasing available small plots around the city and then turning them into green spaces; pocket parks for communities in otherwise more densely populated areas.

Another important part of Vista’s guiding philosophy is to keep a significant proportion of open space natural, clearing only what is required for fire prevention purposes: dry scrub, dead plants, and any trash which has accumulated. Hence the trails, parkways, and urban forestry that make up much of Vista’s natural open areas. 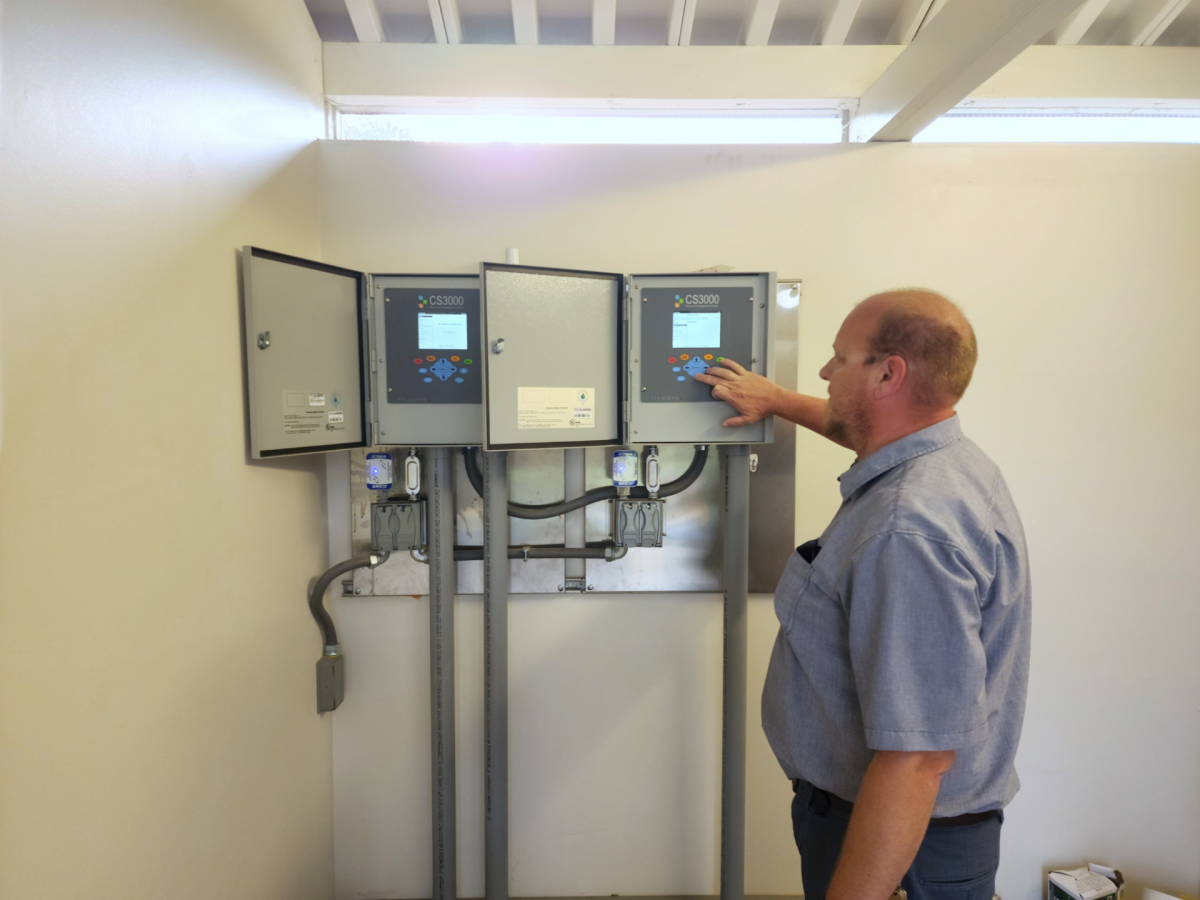 Back to those dying trees. With water restrictions again a reality, Vista has been working with its local water district to ensure that this time around, plants and trees receive enough water to survive. A key component of the planning is the use of smart irrigation from Calsense, established in neighboring Carlsbad in response to similar drought conditions more than 35 years ago.

A core concept behind the controllers is evapotranspiration, the science of water movement through plants and soil. Calsense’s combination of complex evapotranspiration calculations and real-time information about local weather conditions allow Jeffery and his team to very accurately configure how much water is required to keep plants green and healthy, without under- or over-watering them.

The controllers also use Vista’s hilly terrain to ensure irrigation is deployed intelligently. Brengle Terrace Park is built around a central hill, while other parks are sited in canyons and surrounded by inclines of variable steepness.

Why? Well, water flows downhill, even when it soaks into the soil, and that flow can be calculated and calibrated in the controller’s settings. It takes into account the soil type in use, the slope, and whether the area is in full sunlight, partially, or fully shaded. It then establishes the most efficient watering schedule to make certain that the area gets all the water it needs, but that no waste occurs.

“We don’t have to look at the weather and decide how much we need to increase or decrease our watering schedule by depending on the heat, or if there is rain,” Jeffery said. “An added benefit is that it helps with erosion control. We’re not over-watering, so soil isn’t moving unnecessarily.”

Those watering schedules can also be adjusted as needed. Jeffery and his team can remotely postpone irrigation, and the system will factor that into its calculations to ensure the area receives adequate water to make up for the postponement.

Automated calculations like these create efficiencies, freeing up the parks staff to direct their landscape maintenance contractors to more pressing issues. The system alerts them to leaks and breaks in sprinkler heads and pipes and it lets them know if there are blockages or wiring issues.

When there is a suspected break in the mainline water supply, it will shut down completely. That is the signal for Jeffery and his department to investigate quickly, allowing them to spot significant leaks which could otherwise have gone unreported for days, wasting hundreds of gallons of water each minute.

“It doesn’t happen often, but it’s a really important function,” Jeffery said. “Especially right now in California. [It is crucial that] every bit of water gets in the right spot.”

A 360-degree approach to sustainability and urban forestry

So, does smart irrigation contribute to increasing the greenness of the city during a drought period? Jeffery is in no doubt that it does.

“Many water districts, including ours, have more relaxed restrictions when you are using weather-based controllers, because they’re more efficient,” Jeffery said. “There’s a recognition that using a rotor sprinkler as opposed to a spray will take longer than 10 minutes per day to get the water down, but it’s watering more efficiently. It allows us to irrigate intelligently, using the same amount of water to effectively do much more work.”

Investment in smart irrigation technology is also an investment in the future liveability of the city.

“Our vision has always been to make our community more liveable and this investment in providing and caring for our green spaces with increased technology, drives home the city’s passion for creating and maintaining a place where residents are proud to live, work, and play,” Vista Mayor Judy Ritter said. “Our parks are essential to our residents who rely on these green spaces for their physical and mental well-being.”

But smart irrigation is just part of Vista’s water use plan. At its Vista Sports Park, well water from underground aquifers is used for irrigation, separate from the potable water it gets from the water district. There are also plans in place to shift Brengle Terrace Park to well water irrigation too. But that does not mean water can then be used with wild abandon.

“We have to water responsibly,” Jeffery emphasized. “We can’t just be dumping water with no regard for what’s in the ground. We still need to leave that aquifer available for anybody else.” 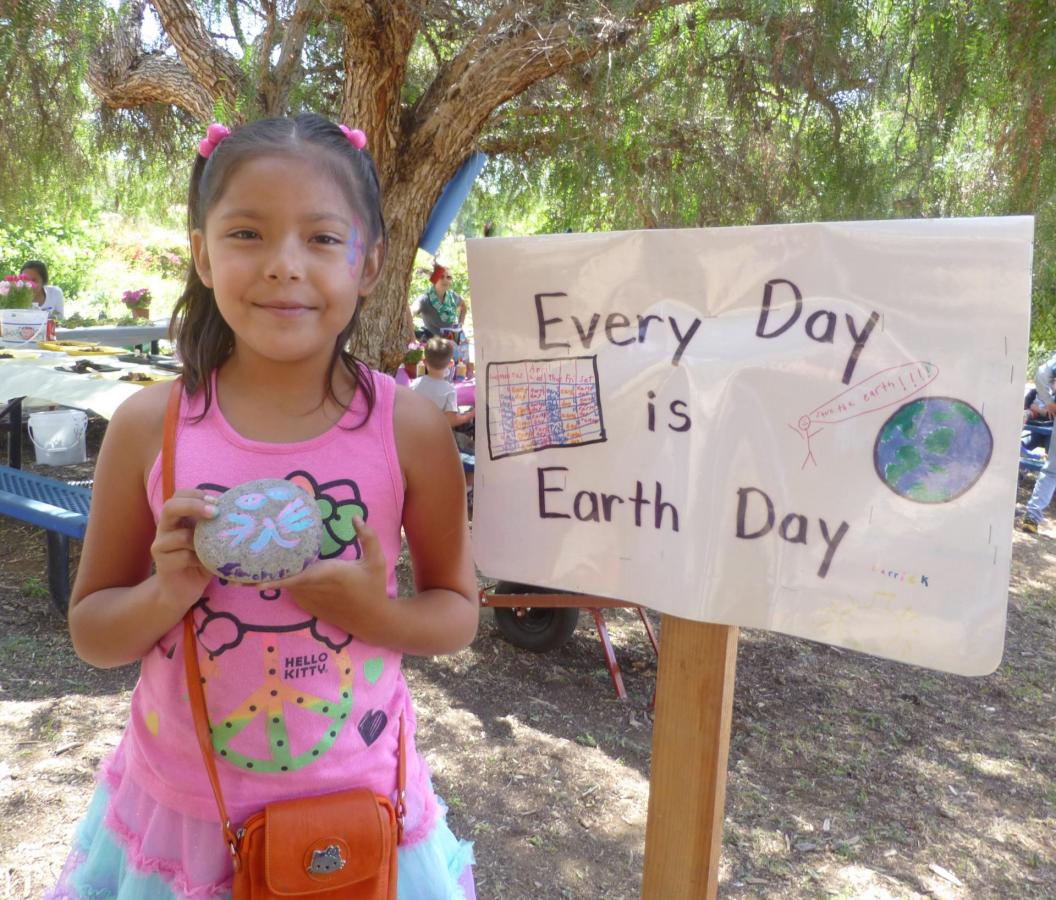 Taking a 360-degree approach to environmental sustainability requires constant planning and experimentation. Irrigation and landscape maintenance should work side by side with fire prevention, ensuring dead plant material is regularly cleared. In Vista, dead plants are often replaced with drought-tolerant plants that can be kept alive with just the rain that the city does get. That means they will not die off during a drought and become a fire hazard.

That planning extends to the ongoing program to renovate different landscape areas across the city, such as medians. Jeffery points to a rehabilitation project carried out on a median sited at a busy freeway interchange, state Route 78 at Sycamore Avenue. This space was previously filled with water-intensive plant material and there were issues with trash getting caught up in among the plants.

“We took all of the existing plants out, which were mainly Indian Hawthorne, gazanias, and lantana,” Jeffery explained. “We replaced them with other varieties, including Agave, Kangaroo Paws, Flax, Mexican Sage, and Aloe. The result is a median that has received nothing but praise from local residents and drivers who go past there. It’s neat and clean and because there’s more space between plants there’s less trash getting caught up, and maintenance is significantly reduced.”

The city is carrying out similar improvements on four other Route 78 interchanges. This work is characteristic of Vista’s holistic approach to the local environment.

“A lot of it is about finding creative solutions to problems. That might be technology, in the case of our Calsense controllers; or it might be a change of approach,” Jeffery said. “For example, following the last big drought, there was a conscious move to eliminate turf areas that weren’t really used for recreation and utilize them more intelligently. We wanted to reduce grass and high-water use areas and replace them with walking paths and planters. The result is that it’s still a useful space, but it’s not a highly irrigated space.”

Vista’s 360-degree approach requires joined-up thinking across multiple departments, a strong will from the city council, and ongoing support from local residents. It calls for intelligent, creative investment and long-term thinking that has an eye on the future even as it addresses the issues of today.

The aim, Jeffery says, is to both beautify the landscape and be responsible with the way water is used.

“There is a way to have the best of both worlds,” he says. “But it doesn’t happen by accident. It needs forward planning, not just thinking about the here and now.”

So, in five years’ time will Jeffery and his team be looking at another spate of trees prematurely lost due to lack of water?

“No,” he responded. “I’m confident our work now is ensuring these new trees will be around for a long time to come.”