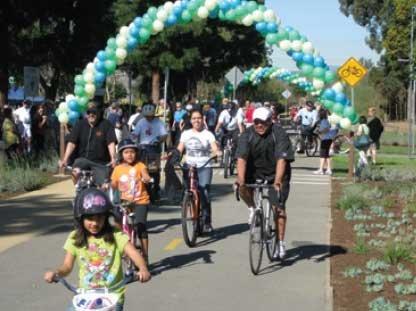 The City of Whittier won the 2010 Helen Putnam Award for Excellence in the Health and Wellness Programs category. For more about the awards program, visit www.cacities.org/helenputnam.

Transforming an abandoned railroad right of way into the Whittier Greenway Trail, a 4.5-mile recreational and commuter bikeway and pedestrian path, took 12 years to plan, fund and build — but it was worth it.

The City of Whittier (pop. 87,128) is located in Los Angeles County, 12 miles southeast of Los Angeles. Nearly 300 traffic collisions occurred between 1995 and 2005 within school zones on the city’s arterial streets. To avoid walking on the streets, many children used an abandoned Union Pacific Railroad right of way to get to school. Along this unsupervised route they encountered criminal activity, including drug use and harassment, along with illegally dumped trash and other hazards. 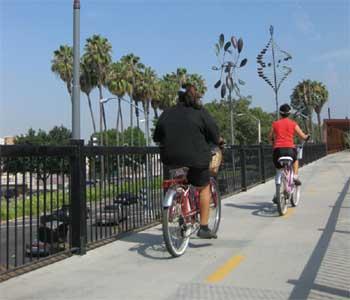 “The community was anxious to improve the overgrown, vandalized railroad route that traversed the heart of the city and eliminate the crime, homeless camps, trash, graffiti and gang activity that the abandoned property attracted,” says Mayor Greg Nordbak. “Residents campaigned for an off-road bike path so families could safely ride to schools and parks without using major arterial streets.”

Whittier began planning, negotiating and acquiring funds in 1997 to purchase the 4.5-mile abandoned property and develop it into a bicycle and pedestrian trail. The corridor purchase and development were funded with $15 million in federal, state and county grants. The city completed the project and opened the trail in January 2009.

Safety monitoring is an important component of trail operations. Graffiti, trash and litter are removed seven days a week. For extra security, the Whittier Police Department patrols the trail with small dual-sport motorcycles, and regular police patrols monitor segments of the trail by visual assessment from each intersection.

The Whittier Greenway Trail’s design follows “safe by design” landscaping practices. The trail increases the urban forest with more than 1,000 trees and numerous specimens of 46 types of plants and shrubs. These plantings maintain greenery to shield adjacent properties, but still allow trail users a clear view of the surroundings and limit opportunities for graffiti. Native and drought-tolerant plants appear throughout the project, requiring little or no water after they are established. The tree varieties planted will not uproot the trail surface, and the irrigation system minimizes run-off on the pathway.

“Rather than have the abandoned railroad property continue as an eyesore in the heart of the city, converting it to a bicycle and pedestrian trail attracted residents who may have not otherwise been inclined to walk or bike on city streets,” says Mayor Pro Tem Cathy Warner. “For Whittier’s health, fitness, commuting and recreational needs, we needed a safe and accessible transportation option for bicyclists and pedestrians. The Whittier Greenway Trail not only provides greater access to outdoor activities, but also establishes a strong and beautiful sense of place for the community.”

“The trail has been a positive addition to the community, especially in its role in promoting health and fitness,” says Council Member Owen Newcomer, who also serves on the council’s trail subcommittee. “Because of our densely populated urban location, the corridor’s transformation to an off-road, non-motorized transportation option provides a safer pathway for recreational and commuter trips and also reduces traffic and air pollution.”

According to Council Member Joe Vinatieri, the Whittier Greenway Trail has become one of the most popular destinations in the city. “Our family uses it all the time, and we hope that the health benefits and just plain fun of being on the trail will be experienced by many others,” he says. “It provides accessibility to homes, school, activity and employment centers, and transit systems, thus encouraging residents to use alternative transportation.”

Council Member Bob Henderson adds, “There is a real sense of community among those who use the trail, and people greet one another as they pass, creating a friendly neighborhood atmosphere.”

“The Whittier Greenway Trail represents the best of what health and fitness are about — an opportunity for the community to share an active outdoor facility that will benefit those who use it for years to come,” says Mayor Nordbak.