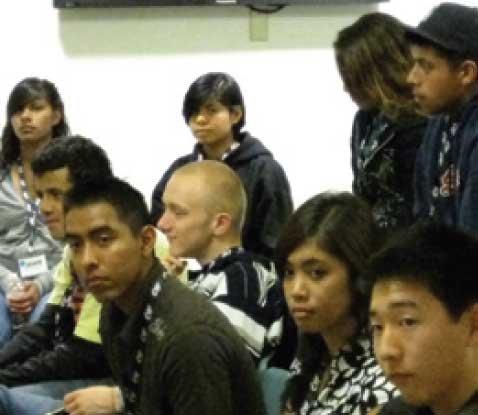 Youth dialogues give teens an opportunity to hear varied perspectives, find common ground and gain the confidence to voice their opinions. Los Angeles, Santa Barbara and the Sacramento region offer examples of how youth-led dialogues can create positive change in communities and involve more young people in public decision-making.

Los Angeles Mayor Antonio Villaraigosa conducted a roundtable discussion with local youth in January 2009 to explore the issues facing young residents. Held at a school in South Los Angeles, the event involved about 55 teens from the neighborhood and local youth council.

Villaraigosa asked the youth council to plan more roundtables for young people in other areas of the large city. In response, youth council members facilitated a May 2009 event that engaged 20 youths from the San Fernando Valley. At this meeting, participants suggested a citywide dialogue to help young people from all of L.A.’s neighborhoods learn about the opportunities available to them through city and local nonprofit programs.

Discussions such as these enable youth commissions and councils to hear more numerous and diverse young voices and provide city leaders with a complete, balanced youth perspective. Teens also gain practical skills when they play an active role in organizing, facilitating and publicizing these efforts.

The Los Angeles Youth Council conducted its first citywide youth meeting on June 20, 2009. The mayor’s office supported the youth council in planning and promoting the event, which drew 110 teens representing a range of neighborhoods and backgrounds to city hall on a Saturday morning.

Michele Segura, an eloquent youth commissioner, welcomed the participants and explained that the meeting’s purpose was to share what was going on in their neighborhoods and learn how they could make a contribution that would impact and improve their community.

Los Angeles City Council Member Tom LaBonge shared his experiences as a former L.A. youth commissioner. He encouraged the teens to find their passion and take advantage of the opportunity to be heard. The teens then separated into four groups, by region, to take part in roundtable dialogues facilitated by Segura and other youth council members. As individuals in each group introduced themselves, the diversity of the gathering became apparent. Some participants came from suburban magnet schools, and others were living in drug and alcohol rehabilitation facilities. The teens discussed the neighborhood issues of greatest concern to them and what they would like to do to improve their communities.

Segura sees the roundtables as a way to introduce young people to involvement in local government. She says, “The real opportunity lies in following up with the youth who attended to make them feel they are a part of something meaningful, to connect them with networks of support and keep them coming back to have a voice in local government decisions.” With the city facing difficult budget cuts that threaten youth recreation and education programs, youth council members have plenty of issues to raise.

In Santa Barbara, a youth council composed of 16 high-school and four junior-high students organizes “Youth Speak-Outs” twice a year. These forums give young people a chance to express their views on important local issues affecting both youth and adults. The youth council members collaborate with other area youth organizations and schools to draw hundreds of young people, who represent a broad cross section of the community, to these events. Topics addressed include teen violence, suicide, the media’s influence on young people, graffiti, and teen drug and alcohol abuse. After each Youth Speak-Out event, youth council members present a summary of youth input on local issues to the mayor, city council and other relevant decision-makers.

“The main advantage of Youth Speak-Outs is that they encourage young people to speak up in public about something they care about and to develop an ability and comfort with speaking out when they are given the opportunity to do so,” says Young. This message is having an impact on the youth council members, who recently attended a city council budget review meeting and successfully petitioned the council to reconsider funding cutbacks that would have affected teen programs.

Young says that the most important strategy is involving youth throughout the planning and outreach process. The teens select topics that interest them and reach out to their peers by posting related information on their Facebook pages, making announcements at school and inviting their friends. They also advise adult staff on promotional materials that will appeal to teens.

Both Los Angeles and Santa Barbara are engaging a growing number of young people in city decisions and developing future leaders through youth-led dialogues with adequate support from city staff and the attention of elected officials. Through such dialogues, youth councils can include a broader youth perspective in their recommendations to city leaders. These events are also an opportunity to recruit new members, connect area teens to city and community services, build the capacity of area youth to lead and participate in public meetings and expose young people to new ideas and perspectives.

Does your city have an innovative way of including a youth perspective in decision-making? Share your story by contacting Carmen Pereira, program assistant, Institute for Local Government; phone: (916) 658-8208; e-mail: cpereira@ca-ilg.org. 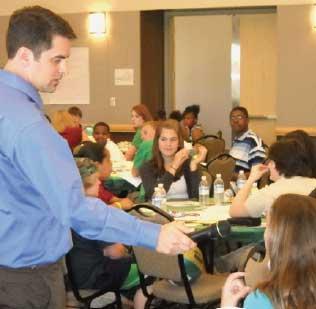 More than 100 teens from cities throughout the Sacramento Valley region participated in a half-day Youth Leadership Retreat on Saturday, April 25, 2009, at the Wackford Community Center in Elk Grove. This event was the first of its kind organized by the Northern California Teen Resources Committee, a support network of parks and recreation staff and other adults working with youth groups in the Sacramento region. The group meets monthly to share best strategies and plan collaborative efforts.

To keep the teens engaged, the four-hour meeting alternated short presentations with team-building exercises led by Summer Thellman of the nonprofit Youth Development Network. Teens from Fair Oaks, Sacramento, Folsom, Elk Grove and El Dorado Hills made group presentations to share their efforts and activities with other youth in the region. The participants expressed excitement about seeing what other youth groups were working on in the region, and it was clearly a leadership-building experience for them to create a presentation (some included videos or slide shows) and speak in front of a large audience.

The Institute for Local Government (ILG) staff gave a brief presentation on the importance of inclusive public engagement and then facilitated a dialogue with the teens whose topics ranged from underrepresented groups to the essential things that youth commissions and councils need to succeed. The ILG presentation included a brainstorming session and prioritizing possible topics for future ILG Youth Commission Briefing Papers.

For more details on the results of this dialogue and other youth-related ILG efforts, visit ILG’s new youth resources page at www.ca-ilg.org/youthengagement.