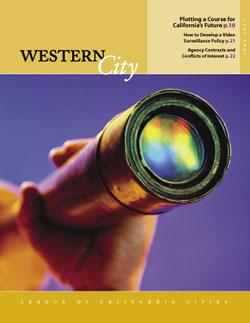 Launching the Discussion: How Should California Grow?

Defending Your Agency Against Spam, Spyware and Other Techno Threats

James Grundman is information systems manager for the City of Rohnert Park. He can be reached at jgrundman@rpcity.org.

Did you know that while your agency is defending its information technology (IT) from spam, spyware and other threats, it could actually be saving money too?

Keeping an Eye on Video Monitoring

Ken Hampian is city administrative officer for the City of San Luis Obispo. He can be reached at khampian@slocity.org . This article is adapted with permission from the April 2007 issue of Public Management (PM) magazine published by ICMA, the International City/County Management Association based in Washington, D.C.

Last year, I was in a city hall conference room discussing with staff members the options for dealing with persistent and costly vandalism at city facilities; in this case, at a park and in city hall restrooms. The discussion led to the idea of video monitoring as a strategy to discourage vandalism. Like many people, I’m of the generation that grew up reading George Orwell’s book 1984, and so my first reaction to this idea was that it gave me the creeps! At the gut level, I just hated the idea of video monitoring for anything other than legitimate police work, and I didn’t want to see a lot of cameras in public places.

Next month, more than 500 elected officials will gather in Monterey for an unparalleled educational opportunity at the Mayors and Council Members Executive Forum and Advanced Leadership Workshops. These sessions provide the latest information and tools to enhance elected officials’ effectiveness.

10 Things Your Information Technology Director Wants You to Know

Laura Peabody is president of the Municipal Information Systems Association of California (MISAC) and chief information officer for the City of Walnut Creek. She can be reached at peabody@ci.walnut-creek.ca.us. For more information about MISAC, visit www.misac.org.

Recently, I asked participants in the Municipal Information Systems Association of California (MISAC) listserv what they wished their elected officials, city managers, department heads and other decision-makers knew about technology. The topic struck a chord, and a lively discussion of a “Top 10 List” ensued.

The City of Livermore won the Grand Prize in the Internal Administration category of the 2006 Helen Putnam Award for Excellence program. For more information, visit www.cacities.org/helenputnam.

We are upset with our new agency counsel. She has advised us to stop purchasing vehicles through our local car dealership, which is owned by one of our elected officials. We are in a remote area, and this dealership is the only one within 20 miles (which is important for servicing vehicles under warranty, for example). Before the dealership opened four years ago, our staff spent a great deal of time traveling to the dealer in the next community to purchase and service cars. And because the dealer is public minded, the agency usually gets a good discount on products and services.

Plotting a Course for the Next Generation of Growth

William Fulton is president of Solimar Research Group, Inc., and a council member for the City of Ventura. He is the author of several landmark books on land use and cities, including Guide to California Planning, The Reluctant Metropolis and The Regional City. Fulton can be reached at bfulton@solimar.org.

Here’s one of the most amazing facts I’ve ever heard: California has been adding more than 1,000 people to the state’s population every day for almost 70 years.