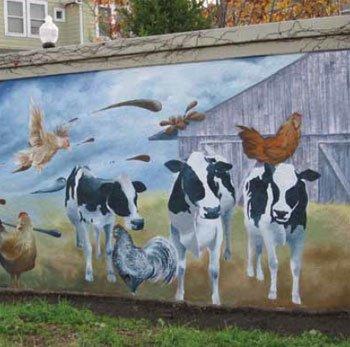 The City of Hayward (pop. 154,000), located in the eastern San Francisco Bay Area, is one of the state’s most diverse municipalities. Hayward’s Mural Art Program takes its inspiration from the city council’s Safe, Clean and Green Priorities. Launched in 2009, the program uses a proactive, preventive approach to help eliminate graffiti, which represents 35 percent of all property vandalism reported to the Hayward Police Department. Graffiti’s effects include declining property values and intimidation of law-abiding neighborhood residents. Graffiti-prone neighborhoods also suffer from increased rates of other types of crime, including gang violence. Hayward spends more than $1 million each year to combat graffiti vandalism.

Communities with similar programs have learned that such murals are rarely defaced by graffiti and stimulate a sense of neighborhood pride and collective ownership. In addition to its primary focus on graffiti prevention, Hayward’s Mural Art Program serves multiple purposes, including:

The Mural Art Program produces highly visible, rapid improvements, while creating enduring artistic representations of Hayward’s rich cultural diversity. Murals provide an active and creative outlet for self-expression and invite participation from community members, artists and educators to create something of value in the neighborhoods where they live. Hayward’s murals showcase a variety of themes, including civic pride and historically significant local events.

The program extends to graffiti-prone commercial buildings, schools, underpasses, utility boxes, fire hydrants, benches and other sidewalk fixtures. Owners of these previously vandalized properties have responded enthusiastically to the opportunity to participate in this innovative program, which also provides a way to create new partnerships. Hayward’s partners in these collaborative efforts include Pacific Gas and Electric, Union Pacific Railroad and the Hayward Unified School District as well as local businesses and artists, homeowners’ associations, residents and hundreds of volunteers.

The first mural project, completed in April 2009, represented a collaboration of the city, the local Community Resources for Independent Living agency and California State University, East Bay. Since then, these projects have been completed through the Mural Art Program:

Many of these locations were covered in graffiti before the murals were painted. Now they are unique works of art and a source of community pride.

The city uses a flexible procurement process to select local artists, which includes outreach to the local art community and academic institutions. An artist or project may be selected through open or limited competition, invitation or direct purchase. Hayward’s standards for contracting and compliance with federal regulations are met through formal agreements with the artists and property owners.

Of the 30 mural utility boxes completed, only three have been modestly marked since they were painted, thus saving the city and community approximately $30,000 annually so far. All 11 wall murals have remained untagged or marked since their completion. Some of these murals have been in place for nearly three years, saving property owners and the city tens of thousands of dollars annually.

The program’s popularity and success has generated several related activities, including a dedicated page on the city’s website, a city mural blog and a brochure for a self-guided mural tour. Through webinars and in-house seminars, the City of Hayward has also assisted more than a dozen other local jurisdictions in their efforts to implement similar programs. Two of these local jurisdictions, the City of Livermore and Alameda County, have launched their own mural art program.