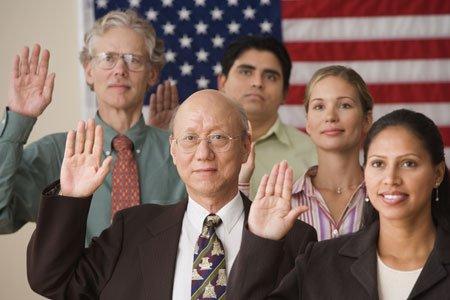 Article January 1, 2014 News from the Institute for the Local Government

How Local Officials Can Support Citizenship and Civic Participation

Approximately 2.5 million “lawful permanent residents” living in California are eligible to become U.S. citizens. Citizenship strengthens immigrants’ ties to their communities, increases their opportunities to participate in our democracy and builds their economic contributions with a typical 15 percent increase in spending power. As consumers and taxpayers, new citizens contribute significantly to local economies. Thus, increasing the number of immigrants who naturalize can be a boon to individuals and their communities.

Despite these benefits, the naturalization process to become a U.S. citizen can be complicated and daunting. Naturalization applicants must apply to the U.S. Citizenship and Immigration Services (USCIS), pay a fee, submit fingerprints, undergo background and security checks, and pass English and civics tests. They should also be wary of fraudulent practitioners.

California’s local officials can leverage their leadership to encourage naturalization efforts and enhance civic engagement by new citizens, which strengthens their communities. This can be done in several ways, including the following.

Host and speak at citizenship workshops to welcome and inspire potential applicants and provide a positive introduction to local government. For example, the mayors of Concord, Patterson, Riverbank and Woodland spoke to potential citizens at such workshops, and two of the mayors who had immigrant family backgrounds shared stories about their own paths to citizenship.

Provide space and recruit volunteers to help with citizenship classes or application workshops as a signal to immigrants that they are welcome within the halls of local government. A volunteer-run citizenship class at Cupertino’s senior center has successfully prepared more than 1,000 new citizens. The City of Oakley partnered with community organizations, businesses and volunteers to assist immigrant attendees at Oakley’s second annual citizenship drive.

Partner with community-based organizations, USCIS and philanthropic foundations to leverage expertise and resources and help residents better understand the naturalization process. Opportunities abound for such partnerships. The Office of Civic Engagement and Immigrant Affairs in San Francisco partnered with local foundations and community-based organizations to establish the San Francisco Pathways to Citizenship Initiative. More than 127,000 individuals began their citizenship journey in the Los Angeles Public Library’s “citizenship corners.” USCIS community relations officers act as a valuable resource for communities throughout the state, and cities can apply to USCIS for grants.

Inform immigrant communities about naturalization efforts through ethnic media, which provide an invaluable connection between immigrants and public agencies. Univision’s partnership with the Ya es hora ¡Ciudadanía! campaign to educate and motivate eligible lawful permanent residents to apply for citizenship led to a dramatic increase in applications both in California and nationwide.

The Institute for Local Government offers a number of resources to help local officials who are interested in encouraging lawful permanent residents to seek citizenship. Active Citizens, Stronger Communities: Helping Lawful Permanent Residents Become Citizens — Options for Local Officials (www.ca-ilg.org/immigrantcitizenship) is a free e-publication that covers understanding the process, hurdles and benefits; the economic impact of citizenship; and resources and case stories. Tools to help local agencies engage new citizens and immigrants can be found at www.ca-ilg.org/engaging-immigrants-and-new-citizens.

This article appears in the January 2014 issue of Western City
Did you like what you read here? Subscribe to Western City