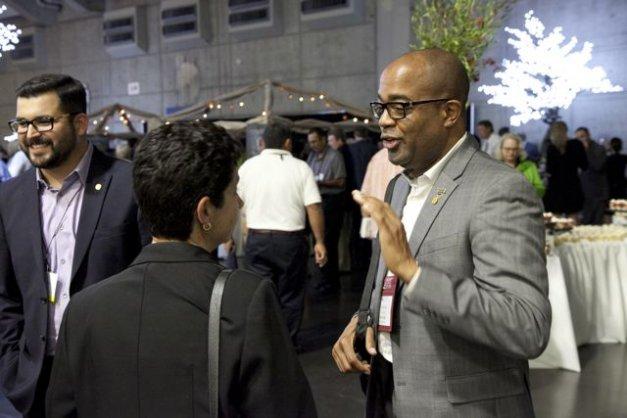 If you aren’t currently taking advantage of the many opportunities that the League offers — professional development, legislative and legal advocacy, networking and more — I urge you to consider getting involved. Thousands of your colleagues statewide are enjoying the benefits of active participation in the League.

You may already be familiar with the wide range of services that are available through the League. These services are described in detail in the League brochure, available online at www.cacities.org/LeagueBrochure.

In my experience as an elected official for the City of San Francisco (pop. 825,111), one of the top benefits of being active in the League is access to my division’s regional public affairs manager, who provides invaluable information about proposed state legislation, issues that impact cities in my region and much more. Your regional public affairs manager is an excellent resource for your city. And you can easily find him or her at www.cacities.org/yourmanager, which includes a League division map and contact information for each manager.

It’s always helpful to hear from our colleagues, too. Here are some thoughts and comments from other League board members about how their participation has given them — and their cities — an advantage.

“I have served on several policy committees and the board of directors for the League,” says Greg Pettis, a city council member for Cathedral City (pop. 52,337). “It’s fascinating to meet so many other elected officials from throughout the state and learn what they’re doing to make their communities better places. Through League seminars and panel discussions, I’ve learned about the great work being done in municipalities today and I’ve been able to bring these programs back to my city. We have replicated some of these programs in the areas of finance, technology innovations and green events and activities. “The city has spun off other programs — like literacy efforts, diversity outreach and healthy eating — to local nonprofit organizations.

“Participation in the League was critical to reaping all of these benefits,” says Pettis. “The value to Cathedral City is immeasurable.”

Avoid Reinventing the Wheel and Save Money

“I’m a council member in a small city (pop. 13,589) with a limited staff and budget. Typically we don’t get too involved in statewide issues,” says Jim Goodhart, a council member for Palos Verdes Estates. “However, our participation in the League’s Los Angeles Division gives us eyes and ears for what’s going on around us at the legislative and policy levels. From my experience serving on a League policy committee and in the Mayors and Council Members’ Department, I know that smaller cities like mine can benefit from the League because we rely on each other and don’t have to reinvent the wheel on key policy issues.” Goodhart adds, “Regional issues such as stormwater management are becoming more common, so we are able to partner with other cities through the League, which saves money and resources.”

Gain Credibility and Strength in Numbers

“After almost 16 years as an elected official in an isolated community, I can’t think of anything I could have done to provide more value to my community than being part of the League,” says Chip Holloway, mayor pro tem of Ridgecrest (pop. 28,348). “The ability to gain strength in numbers and work as part of a united front on major issues has given my community a level of credibility we couldn’t achieve alone. The networking and access to other experienced elected officials as well as city staff has allowed me to entertain new ideas that have benefited my constituents and helped my city avoid many pitfalls. I was initially reluctant to participate in the League because my city is geographically remote, and it takes effort. But it was one of the best moves I’ve ever made as an elected official.”

It’s Not Just for Mayors And Council Members

“The League offers much to learn that we can take back to our community: information about current issues and legislation affecting our cities, which we need to fight or support. And it’s not just for policy-makers — it’s for people from all city professions,” says Karen Avilla, treasurer for the City of Carson (pop. 92,196). “As a city treasurer, I served on the League’s Revenue and Taxation Policy Committee for several years. When you work on a policy committee, you learn which staff at the League and the Legislature can help you with a specific issue. The policy committees provide many ways to put your expertise to work and learn important things to take back to your city.”

Avilla agrees that networking with other League members helps avoid reinventing the wheel when a city is confronting a challenge or an opportunity. “The League offers many things — training, professional development, advocacy, assistance with temporarily filling open positions — and points you in the right direction when you seek information,” she says. “Another advantage is the chance to network with legislators who may be instrumental in legislation that impacts your city.”

The League’s diversity groups provide an additional way to participate in the organization, as Avilla has discovered. “I’m involved with the League’s Latino Caucus, where I have found a group of city officials and staff with whom I share many common interests,” Avilla says. Other League diversity groups include the African-American Caucus; the Asian-Pacific Islander Caucus; the Gay, Lesbian, Bisexual and Transgender Local Officials Caucus; and the Women’s Caucus.

“My constituents and my city are my primary concerns as an elected local official,” says Scott Nelson, mayor of Placentia (pop. 51,776). “The League offers a great opportunity to become involved in an organization that has the ability to advocate for — and set — policy that benefits local control, and that’s exactly what our constituents expect of us.

“Perhaps even more important is the League’s ability to accomplish things such as putting statewide initiatives on the ballot,” says Nelson. “The League focuses on issues that affect all cities statewide. With over 400 member cities, its strength in numbers plays a vital part in the League’s capacity to protect local control and local tax dollars.”

Give Your City a Voice And a Seat at the Table

“A decade ago one of my mentors (retired City Clerk Nancy Dillon from Thousand Oaks) called and asked me to get involved with the League and serve on the Administrative Services Committee and the Legislative Committee of the City Clerks Association of California (CCAC),” says Randi Johl-Olson, who holds a law degree and is city clerk for Temecula (pop. 104,879). “Nancy believed my legal background and personality would allow me to work well with the League, legislators and staff on important issues affecting the city clerk’s profession and my city in general. She promised me that once I got involved, I would be hooked and never look back. She was right.

“Over the past decade I’ve had the opportunity to write legislation, testify in hearings, speak and train at sessions and collaborate with key legislative and League staff members. We’ve worked on laws affecting elections, public records, open meetings, transparent government and more,” says Johl-Olson. “My city and my profession have a direct seat at the municipal governance table through my service with the League and CCAC.”

Improve Your Skills, Help Your Community

“I’m a more well-rounded planning commissioner as a result of my experiences with the League. I’ve served on the League board of directors for six years, and prior to that I was active in the League’s Planning and Community Development Department,” says Bob Combs, planning commissioner for the City of Danville (pop. 42,720). “Through my involvement I’ve met a great many people from throughout the state, both elected and non-elected city officials, who have shared their insights and experience on a broad range of local issues and concerns. I bring this information back to my community, where we put it to practical use.

“The educational process related to committee participation offers another benefit,” says Combs. “Because we learn about legislation, we can go back to our cities and explain to others its local impact and what we can do about it.”

Learn From Others And Get a Heads-Up On Regional Trends

“I’m a big believer in learning from the experiences of others,” says Bruce Channing, city manager of Laguna Hills (pop. 30,703). “Participating in the League has helped my city and me in many ways. As a professional in my field, the League’s educational opportunities are tremendous, and being involved in a policy committee and on the League board of directors provides many benefits to a city of our size. Working with peers and local leaders from throughout the state allows us to understand the challenges that other cities are dealing with, how they’ve succeeded in addressing them and how we can apply their success in our city. There is no problem so unique that other communities haven’t already experienced it in some form.

“Serving on a committee — whether it’s a policy committee or a leadership committee in a League division or professional department — provides exposure to a variety of issues,” says Channing. “The conversations that take place in and around the committee meetings can be of great help to our cities and to us as professionals. For example, things often happen in our region before they occur in our city. Hearing about regional trends can provide a helpful and valuable forewarning about what will likely be happening soon in your community.”

The League has much to offer you and your city, and your participation can benefit your community and others statewide. If you haven’t yet registered for the League of California Cities 2014 Annual Conference & Expo, don’t miss this opportunity to take advantage of the year’s premier educational and networking event (find more information online at www.cacities.org/AC). We look forward to welcoming you and learning more about what’s happening in your city.

This is my final Western City column as League president for 2013–14. My sincere thanks to my fellow city officials who have served with me on the League board of directors and its Executive Committee. I am also extremely grateful to League Executive Director Chris McKenzie and the League staff. Their professionalism and geniality are invaluable, and they made my work as president easier. And special thanks to my own staff, without whose support I could not have undertaken the challenge of serving as League president. In closing, I offer kudos to the thousands of city officials and staff whose involvement and participation make the League strong and help improve the quality of life for all Californians.