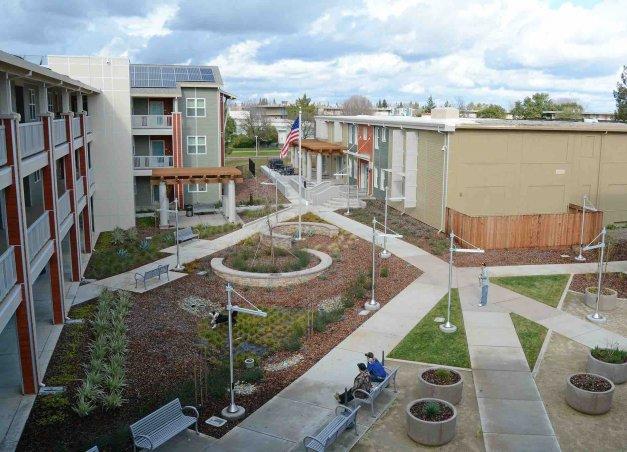 The first permanent supportive housing for homeless veterans with disabilities in the Sacramento region opened Aug. 31, 2016, in the City of Rancho Cordova on a 3.65-acre lot that was formerly part of Mather Air Force Base. The base was decommissioned in 1993. Mather Veterans Village is a three-story, garden-style community with 50 apartment homes and 3,500 square feet of meeting rooms, staff offices, a kitchen and lounge area and a computer lab. In addition to exceeding California’s energy and water usage standards, the site features drought-tolerant landscaping and drip irrigation using 100 percent on-site gray water and rooftop solar panels that generate power for the hot water system and provide electric generation for tenant net metering. The village’s community hub is located in a portion of a repurposed 1950s military building. 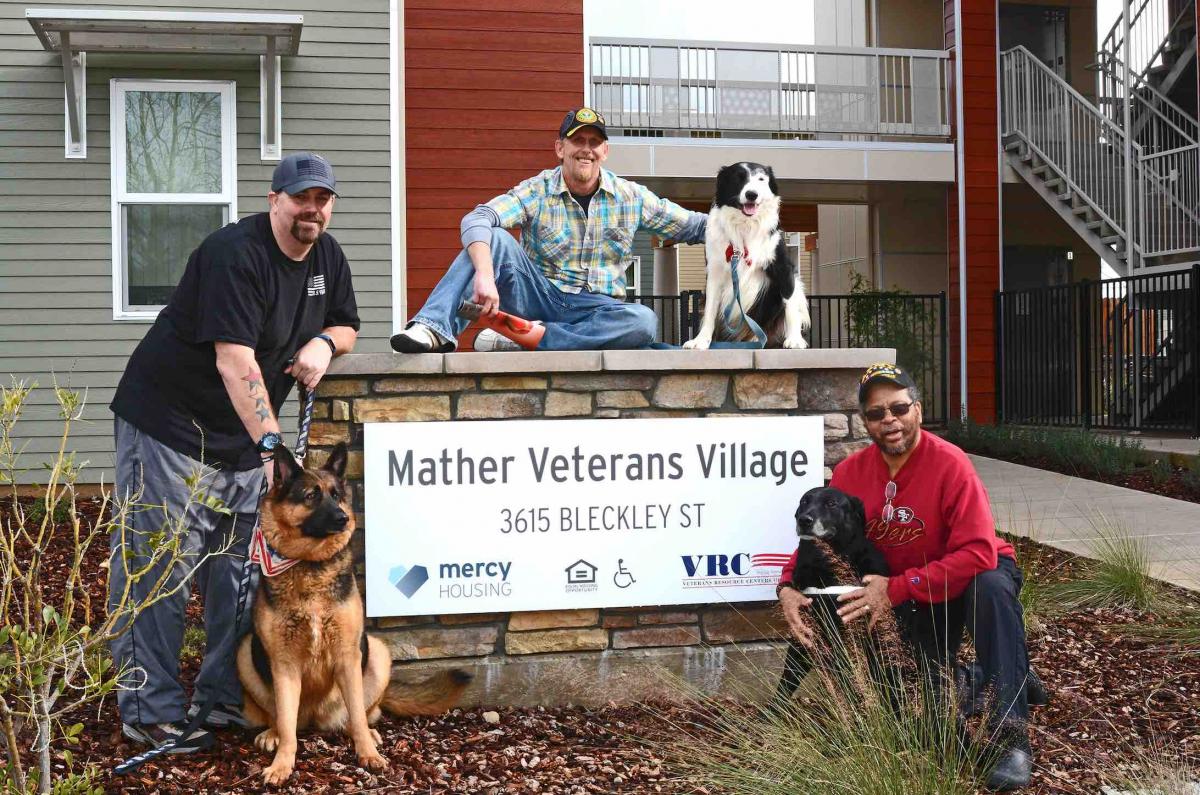 “The City of Rancho Cordova, once the site of an active Air Force base, is still home to more than 5,000 veterans and their families. In 2006, we began to explore the feasibility of creating a village dedicated to the care and housing of our nation’s veterans,” says City Council Member Robert McGarvey. “This city project, 10 years in the making, is the result of a partnership between our city, Mercy Housing, Veterans Resource Centers of America (VRC) and the County of Sacramento.”

“The County of Sacramento is pleased to be a partner in helping make Mather Veterans Village a reality,” says County Supervisor Don Nottoli. “Our veterans will benefit from this outstanding and much-needed project, which provides a safe and welcoming home and supportive services for their overall well-being.”

“Everyone at Mercy Housing California feels enormous pride whenever we complete a new affordable housing community for low-income residents,” says Doug Shoemaker, president of Mercy Housing California, which is the master developer of this project and part of a larger national nonprofit organization focused on providing affordable housing for low-income families, seniors and people with special needs. “But there is an extra-special feeling we all share when we open a new community for formerly homeless and disabled veterans,” he adds. “Mather Veterans Village would not have been possible without the amazing group of collaborative partners who worked tirelessly to turn this concept into a beautiful reality.”

George Thomas couldn’t agree more. George, now a resident at Mather Veterans Village, is just one of 50 formerly homeless veterans who now have a place to call home.

“I had been living in my car. One weekend I found myself praying to God, asking him to please help me. That Monday, I got the phone call that I could move into Mather Veterans Village,” says George.

Keeping a Promise to Veterans 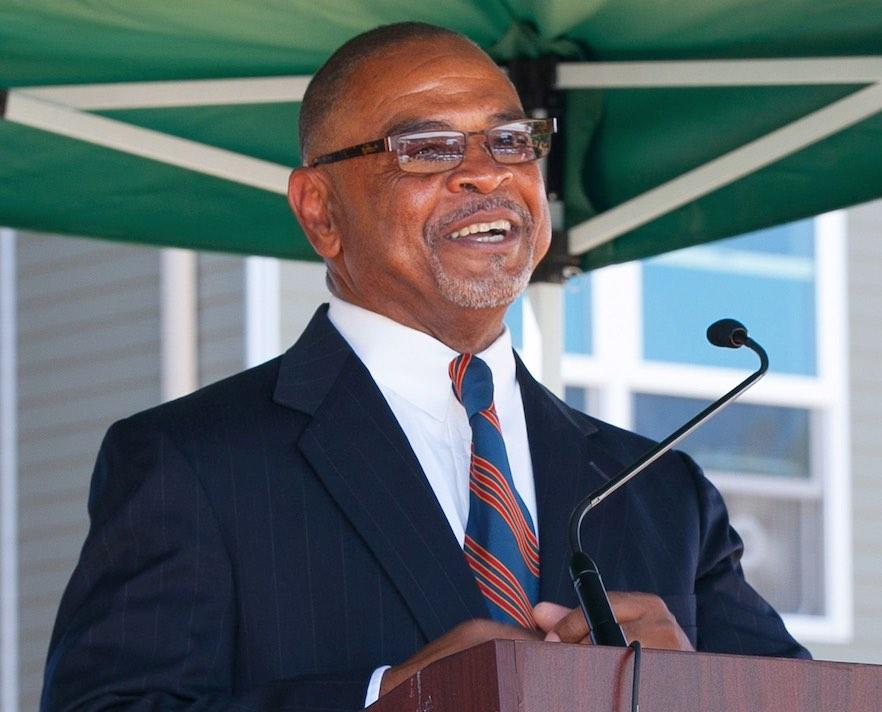 George served in the U.S. Army from 1979–86 as a field radio repairman and earned the rank of sergeant. Six years ago, his father — who was his best friend — passed away. Beset by grief, George turned to drugs to stop the pain. He became addicted and then homeless. Living on the streets was hard. George didn’t know if he’d be alive the next day or where his next meal was coming from. But he had a family who loved him and 11 grandchildren he wanted to see grow up, so he decided to make a change.

George reached out to Veterans Resource Centers of America (VRC), the co-developer and master service provider for Mather Veterans Village, to ask for help. VRC provides a spectrum of supportive services at the village, including counseling, job training, medical assistance, group and individual therapy and a healing environment. They placed George on the waiting list for Mather Veterans Village.

“We as Americans made a promise to these brave veterans,” says Marc Deal, executive director of VRC. “We said, ‘Fight our wars, keep the wolves at bay, stand the wall and when your watch is done, we will take care of you.’ Often, we have not kept our part of the bargain, but with Mather Veterans Village and this collaboration, we are. This is the finest example of not only keeping a promise but also giving a veteran the best gift you can: hope.”

“I am living in my new home in Mather Veterans Village, enrolled in a drug recovery program and applying for a job,” says George. “I have hope for the future.”

Over 92,000 veterans live in the Sacramento region, and the area has the 10th highest number of homeless veterans of all California counties. Nevertheless, housing to support the unique needs of veterans who are homeless and have disabilities was virtually non-existent — until now. 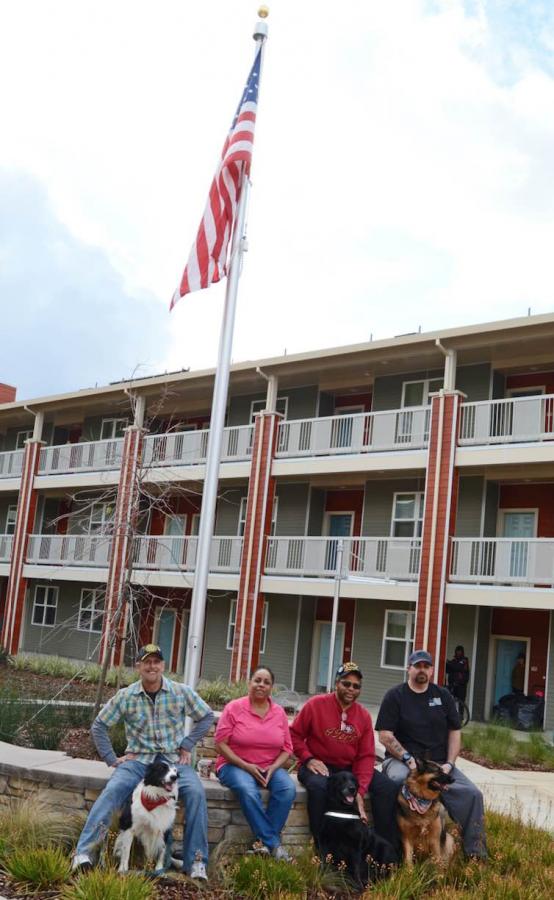 The 50 permanent supportive homes are just the first of three phases planned for Mather Veterans Village. Phase II comprises the supportive services and transitional housing component of the overall project and will include a 46-bed transitional housing program, a commercial kitchen and chef and administrative offices. Phase III will consist of an additional 50 permanent homes on the site, which is surrounded by supportive services including education and training, job opportunities and the Mather Veterans Administration Hospital, just a block away. The partners hope to break ground on Phases II and III in 2018.

The modern apartment homes surround a central courtyard, where benches are a popular destination for residents both day and night. It’s not uncommon to see veterans on these benches, either alone or with a service dog, quietly watching the American flag wave in the breeze. At other times, lively conversations, hearty laughs and encouragement can be heard when residents gather in the courtyard. Whether they are in their homes or in the courtyard, these veterans and their families are now living in a peaceful and safe place, helping each other heal and giving each other hope.

The Road From Hopelessness to Home 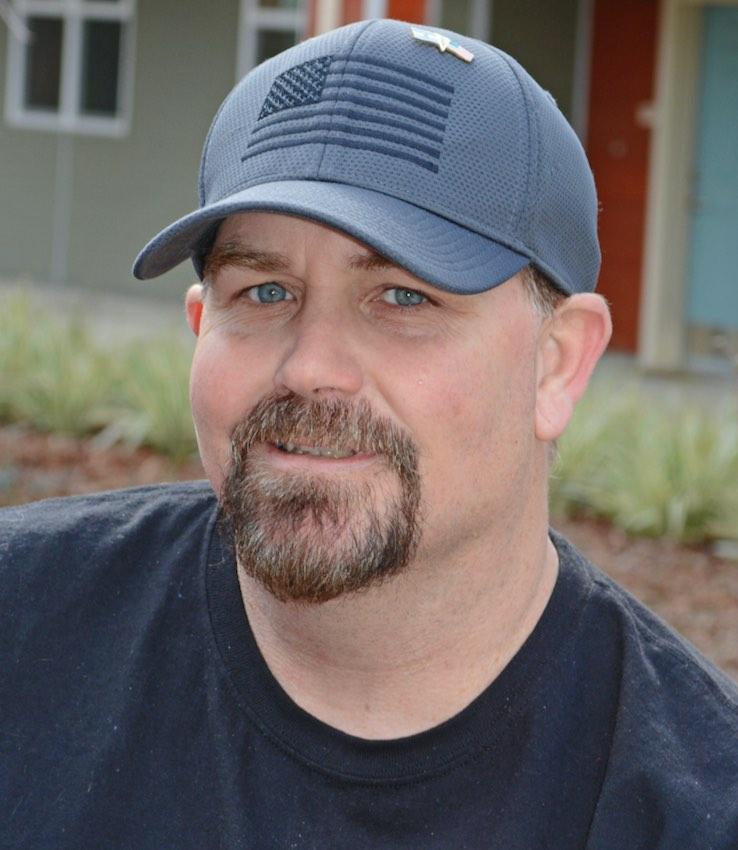 Joe Qualls served in the U.S. Navy from 1987–91. He returned to Placerville, his hometown, after completing his service. “I went from Desert Storm to Placerville,” he says. “It’s hard to describe how that felt — it was like going from a major roller coaster to a kiddie ride at the fair.”

Qualls worked in construction, but found it increasingly difficult to hold a job. He was suffering from post-traumatic stress disorder (PTSD) and didn’t realize it. “I was angry all the time,” he says. “I would get upset and quit. I went through dozens of jobs. And then the economy tanked, and there was no work in construction.”

Without a job, Qualls became homeless. “I was living on the river in Sacramento, and I was suicidal,” he says. “Finally, a friend told me to go to the Veterans Administration (VA), and it was the best thing I ever did. I got a nice doctor who did a physical evaluation and talked to me about mental health. They gave me anger management classes for my PTSD and helped me find work.”

With assistance from the VA and the Veterans Resource Centers of America, Qualls found temporary housing and applied for a slot at Mather Veterans Village, where he now makes his home. He shows his tidy apartment and kitchen to visitors and explains, “I love to cook.”

Today, Qualls works in a veterans’ support program. He says, “I go out on the streets to look for homeless vets and help them get the services they need.” Qualls offers his fellow veterans help — and hope.

A New Lease on Life 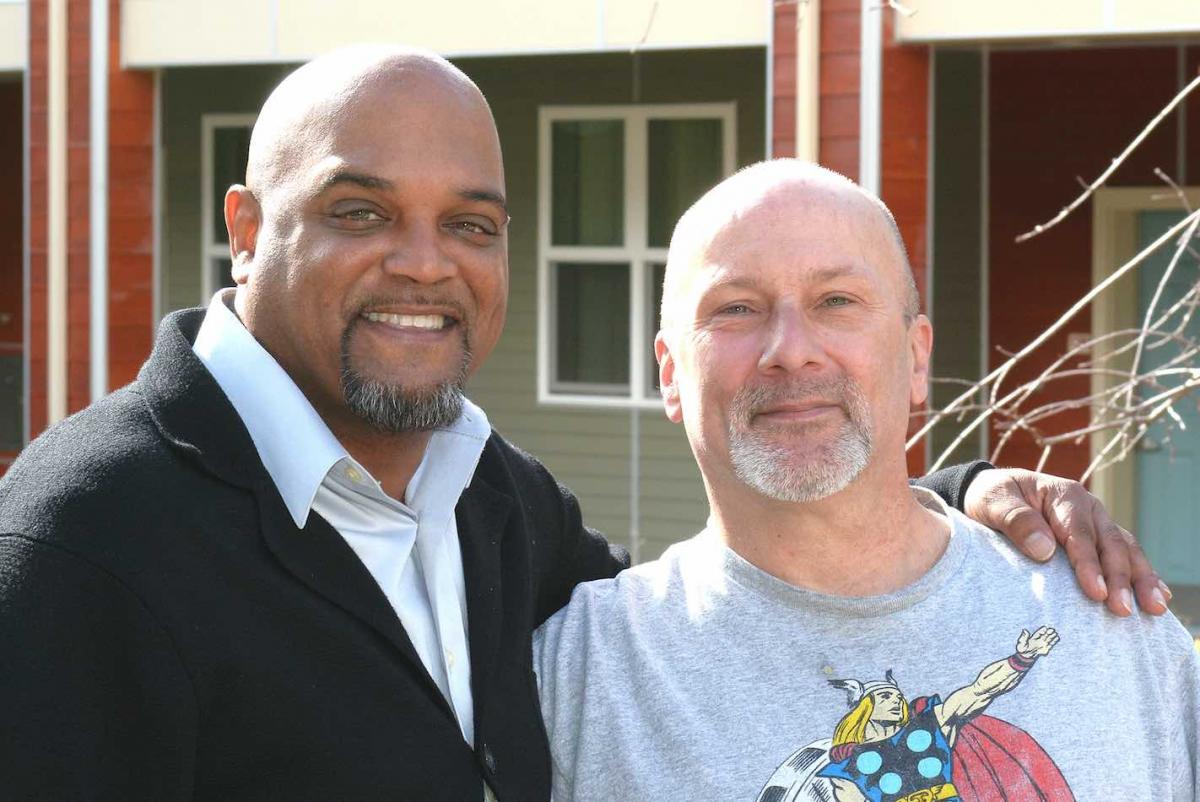 Robert St. Clair served in the U.S. Army from 1980–83. After his service concluded, he struggled with methamphetamine addiction and homelessness for years. In 2013, he entered a substance abuse treatment program with the help of the Veterans Resource Centers of America (VRC) and the Mather VA Hospital (VA). “It took two rounds of rehab,” says St. Clair. “And I’ve stayed clean and sober for two years now.”

In 2016, St. Clair learned about Mather Veterans Village and applied for housing there. “The wait was a time of extreme anxiety,” he says. “Kevin Walker was assigned as my case worker, and I called every day about my application.”

When he got the OK to move in, St. Clair was joyful and relieved. He says, “God gave me a new lease on life through VRC and the VA’s inpatient drug treatment program — and the support of my fellow veterans.”

Working Toward a Dream 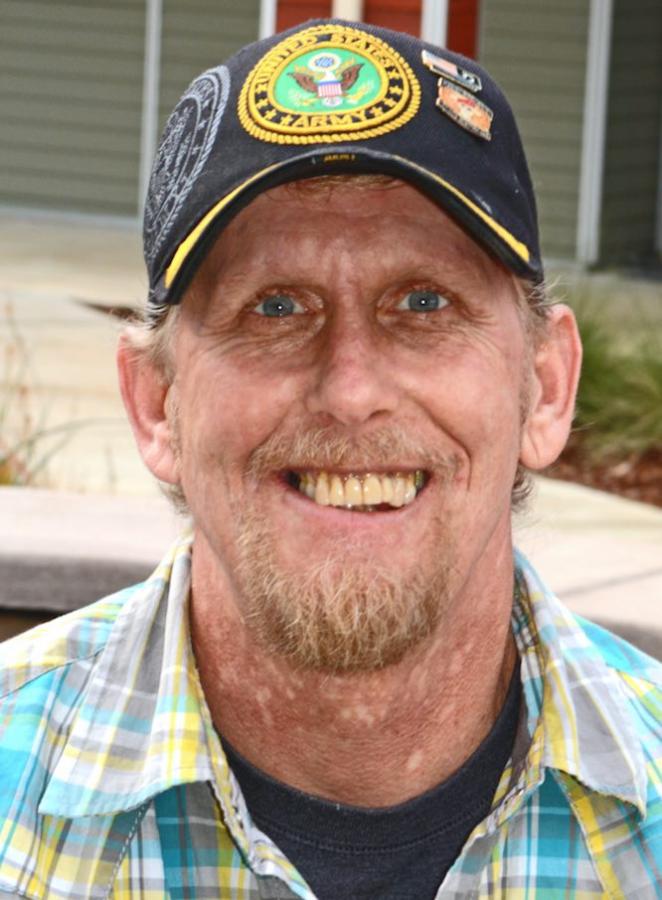 Jerry Bradbury served in the U.S. Army from 1985–90. “After I left the service,” he says, “I went to college and raised a family. After the kids were grown, I moved home to Roseville and went to work as a truck driver.” On a day off work, he took a walk, and two strangers assaulted him. Bradbury fell from a bridge and suffered severe head injuries.

“I woke up in the hospital,” says Bradbury, who subsequently received extensive rehabilitation for his injuries. His recovery was a prolonged process. In the years following his assault, he became depressed and started drinking. His daughter urged him to seek help, and he completed a drug and alcohol rehabilitation program in Redding.

Bradbury ultimately made a fresh start. “I came back to Sacramento to be closer to my daughter,” he says. “I applied for a slot at Mather Veterans Village. After they approved my application, I moved in and got my dog, Twoface.”

The dog has been a catalyst for Bradbury, who is earning a certification as a dog trainer. His face lights up when he describes the program. “My dream is to breed these dogs, train them to be service dogs, and then give them to members of the armed services,” he says. “It’s great that we can have our pets here.” He adds with a smile, “And it’s not just dogs — my neighbors have cats, too!”

Finding a Community to Call Home 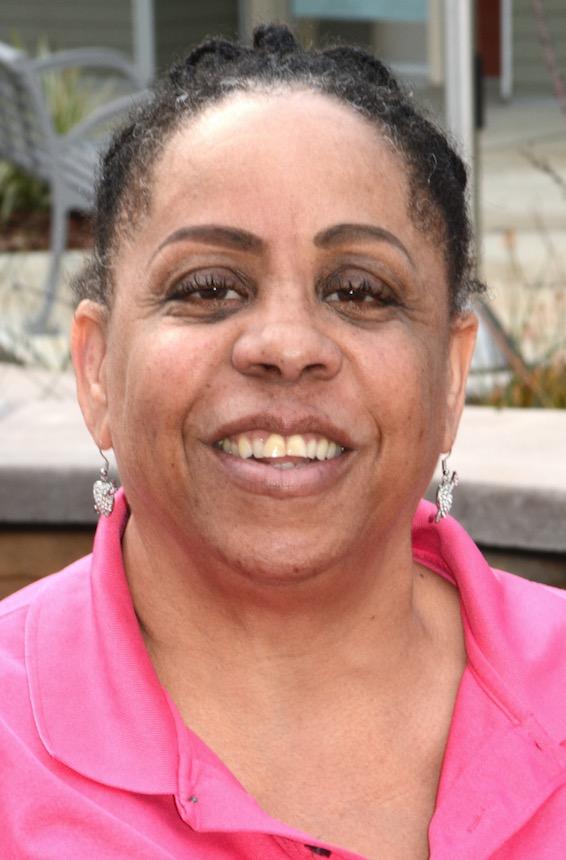 Sheila Austin served in the U.S. Army from 1979–81. For the past several years, finding a place to live has presented a challenge. Sheila and her son stayed for a time in housing provided by members of her church and then at her sister’s house. The Veterans Resource Centers of America helped her secure temporary transitional housing two years ago and connected her with Mather Veterans Village, where she and her 16-year-old son now reside.

The many amenities of her new home include a recent bicycle giveaway called “Freedom Wheels.” The Cameron Park Rotary Club and Folsom Moose Lodge gathered discarded bikes, which were repaired and refurbished by individuals in the pre-release program at Folsom Prison. Residents at Mather Veterans Village received 20 of these bikes in November 2016. “It was great!” says Austin. “We each got to pick one.”

Austin describes life at Mather Veterans Village. “There is a shuttle to the light rail station and a bus stop right across the street, so my son can catch the bus to school,” she says. “We have cooking classes that are a lot of fun. There are computers for the vets to use and a nice TV to watch. The VA hospital is just across the street, and we have access to a gym.” Perhaps best of all, Austin says, she likes the sense of community here. 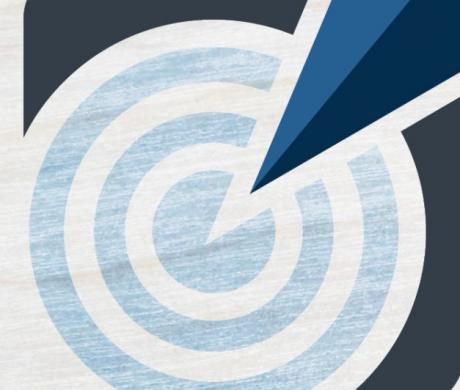 A Look at the League’s 2017 Strategic Priorities

The League is focusing on public safety, affordable housing, the homelessness crisis and funding for critical transportation and water infrastructure. 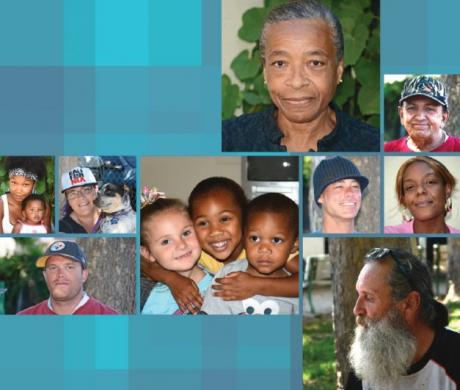 The League is taking unprecedented steps in response to an alarming increase in the state’s homeless population. 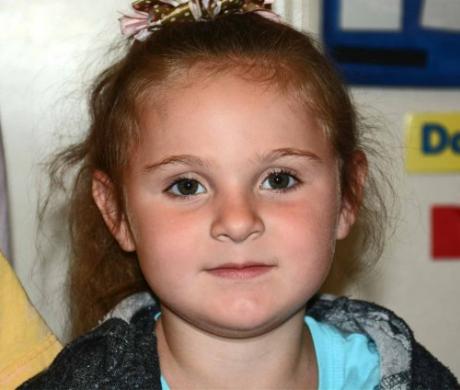 Cities have a responsibility to work with their county, state and federal partners to provide the services needed to address this issue.​