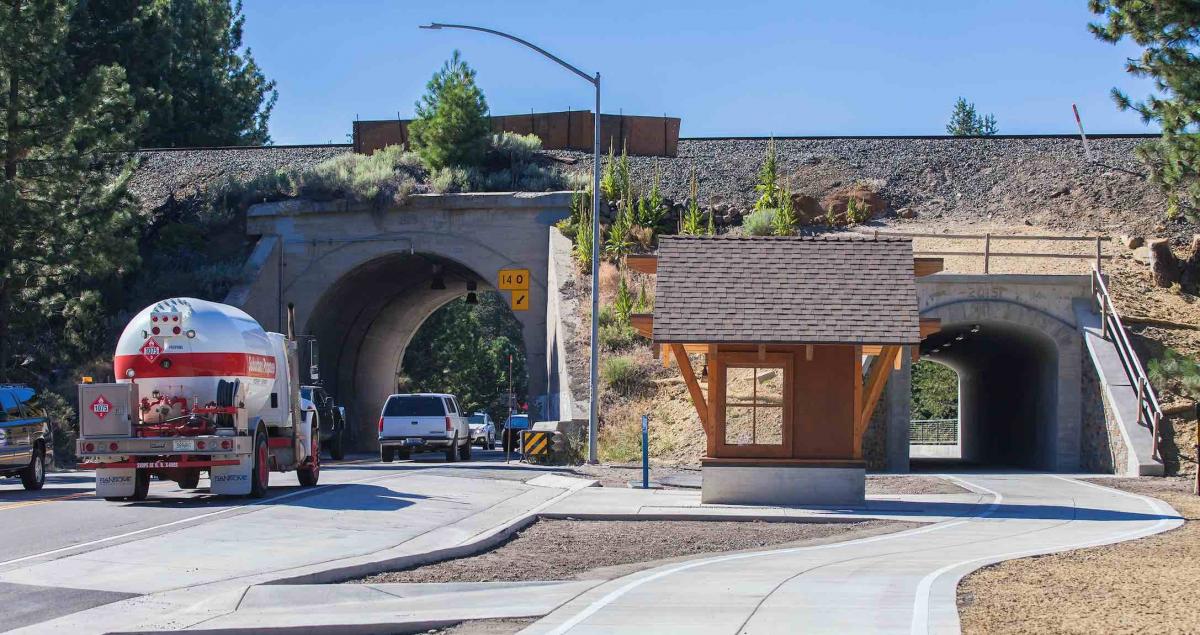 The Town of Truckee had a growing problem in the years leading up to 2016. Pedestrians and bicyclists traveling along State Route (SR) 89, the most heavily used highway between Interstate 80 and Lake Tahoe, had to share a narrow road crossing under railroad tracks with cars and trucks. The 24-foot-wide concrete tunnel under the Union Pacific Railroad was built in 1928, and it has no shoulders, bike or pedestrian facilities. Each day, up to 20,000 vehicles pass through the tunnel, which local residents call “the Mousehole.” 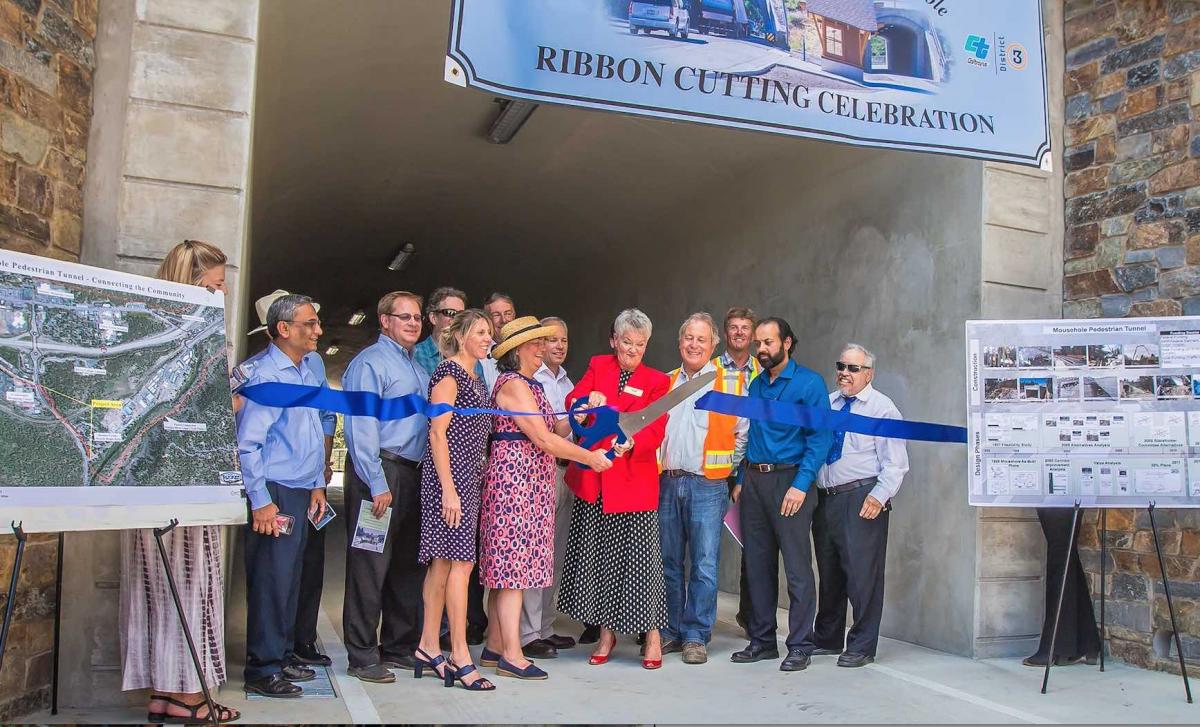 To address these safety challenges, Truckee — in partnership with Caltrans, Union Pacific Railroad and the Nevada County Transportation Commission — designed and constructed a 12-foot-wide bicycle and pedestrian tunnel next to the SR 89 roadway.

Located in the Sierra Nevada just west of the Nevada state line along Interstate 80 and the Union Pacific railway, Truckee was established in the 1860s but did not incorporate until 1993. The town’s population of approximately 16,681 swells to nearly 40,000 on peak holiday weekends. Truckee encompasses an expansive and diverse mountain landscape comprising nearly 34 square miles, ranging in elevation from 5,500 feet at the town’s eastern boundary to 7,500 feet in the northwest corner — and includes over a dozen miles of the Truckee River and 158 miles of roadway.

A robust and burgeoning biking and walking community calls the area home. Many nearby residents use the route through the Mousehole on a daily basis to walk to local businesses, grocery stores and schools. Construction of the new tunnel, nicknamed the “Mini Mousehole,” would give pedestrians and bicyclists a safe place to cross under the railroad away from traffic. The project included a new transit shelter and created a critical linkage with local and regional trail connections between Truckee and nearby Lake Tahoe.

The design took the tunnel’s aesthetics into account. The arch mimics the look of the larger tunnel, but the rock treatment on the wing walls gives the Mini Mousehole its own unique look. 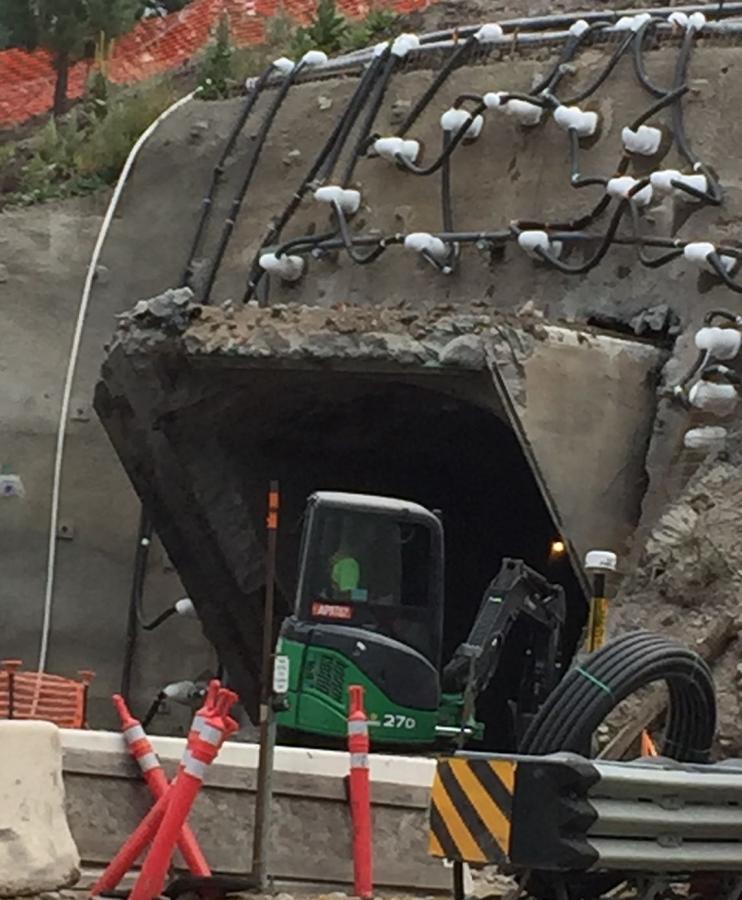 Coordinating among federal, state and regional agencies and local and private partners wasn’t the only challenge facing the Mini Mousehole project. The need to minimize disruptions for rail traffic and vehicles on SR 89 presented another constraint. The project relied on a unique combination of construction methods to install the tunnel under the railroad tracks while maintaining typical daily rail traffic of 25 freight and two Amtrak trains. The construction process also required daily monitoring to check the rail tracks for potential settling of as little as a quarter of an inch.

The project used ground freezing to shore the embankment and horizontal jack-and-bore methods to push the tunnel through the partially frozen embankment. Ground freezing is a construction technique used to stabilize soil so it will not collapse adjacent to excavations. Pipes are placed through the soil, and refrigerants are run through the pipes to freeze the soil. Frozen soil can be as hard as concrete. The Mini Mousehole project required approximately one month to install the freeze pipes and one month to freeze the soil.

“The combination of ground-freezing and jack-and-bore construction methods on this scale under an active transcontinental rail line made for an exciting construction process,” says Truckee Public Works Director Dan Wilkins. “It was suspenseful as it was occurring — and a relief when it was successfully completed.” 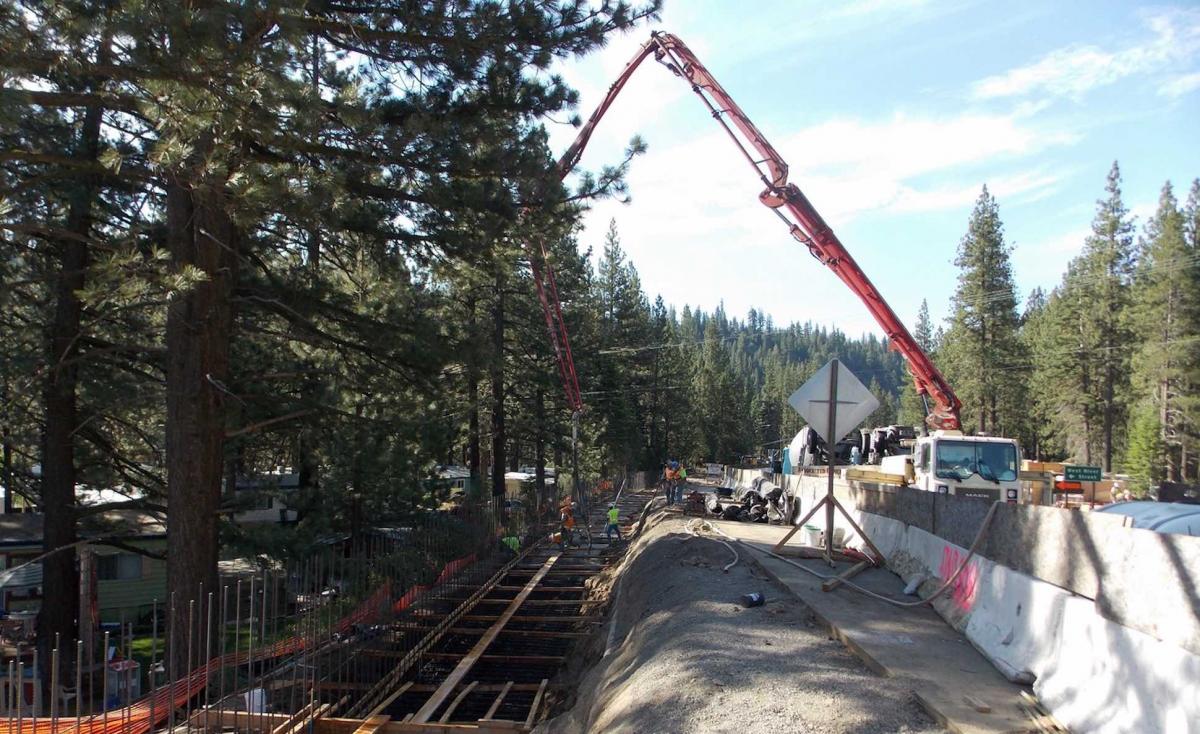 The success of the project depended on strong partnerships among the Town of Truckee, Caltrans, the transportation commission, Union Pacific Railroad, Placer County and others. During the project’s development, a committee composed of representatives from local and regional businesses, government agencies and environmental groups educated key stakeholders and provided input to the Truckee Town Council and staff.

“The project was the result of nearly two decades of hard work and persistence by the project partners,” says Becky Bucar, engineering manager for the Town of Truckee. “Numerous alternatives were considered, ranging from replacing the 1929 tunnel with a four-lane roadway to making modest signal and lighting improvements.” These efforts resulted in a $12.68 million improvement.

The Mini Mousehole benefited from multiple funding sources because it serves a significant interregional function on the state highway system, located beneath the transcontinental railroad and on the border of two counties. Federal funding provided $4.45 million, state funding for the project totaled $7.56 million and $670,000 came from local traffic impact fees.

Caltrans and the Town of Truckee implemented the various phases of planning and design for the project using cooperative agreements between the two agencies. “We were pleased to partner with the Town of Truckee and the Federal Highway Administration on the project,” says Caltrans District 3 Director Amarjeet Benipal. “This project is an excellent example of Caltrans’ goals to provide a safe transportation system and promote health through active transportation.”

Caltrans took the lead on the project approval and environmental document phase with support provided by the Town of Truckee. When it was determined that the project schedule and budget would benefit from the town taking the lead on project design and construction, Truckee took over the project. 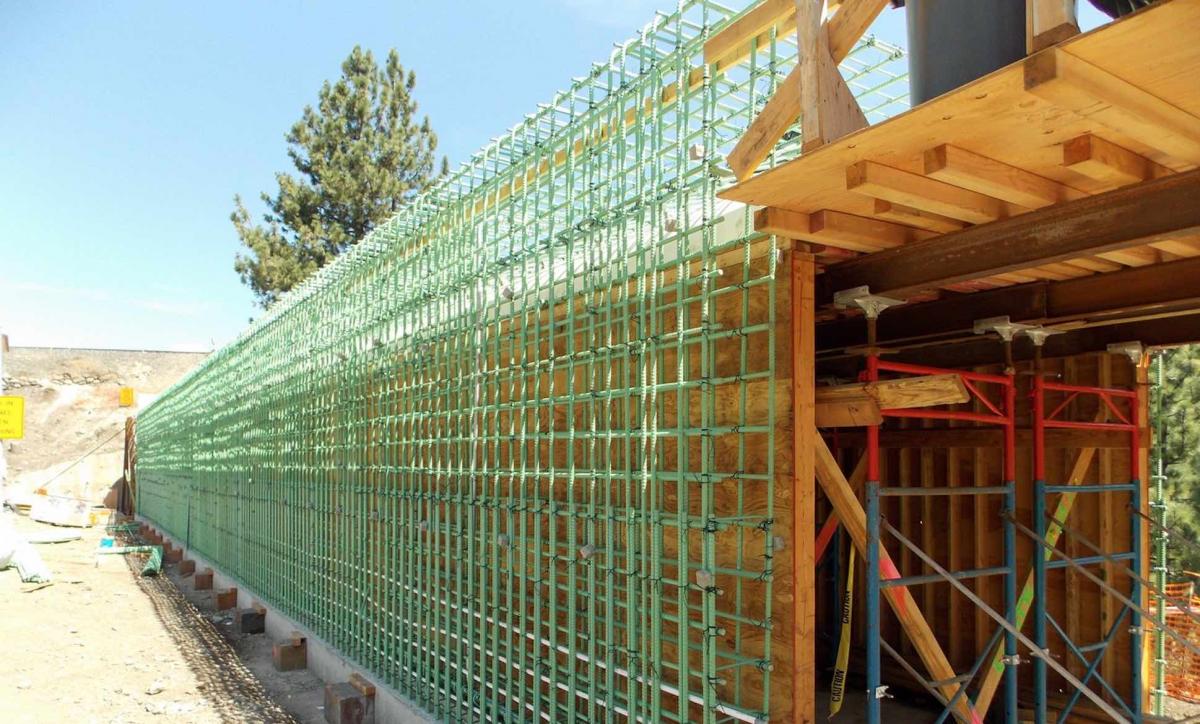 Completed in August 2016, the Mini Mousehole tunnel path allows users to pass safely under the railroad and avoid potential traffic conflicts in the vehicular tunnel. It has also expanded the area’s recreational opportunities. This project, now enjoyed by scores of bicyclists and pedestrians, encourages people to choose alternative forms of transportation.

At the 2016 ribbon-cutting for the Mini Mousehole, then-Mayor Carolyn Wallace Dee said, “It’s taken years … It is such an emotional moment for everyone here. This is a vital project, especially for the children and families who will have a safe alternative to the vehicle tunnel. It is really a moment of pride for the Town of Truckee.”

Photo Credit: Courtesy of the Town of Truckee. 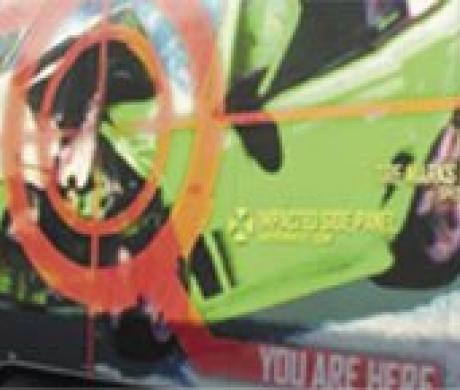 The City of Monterey Park covers 7.73 square miles in the San Gabriel Valley east of Los Angeles, and the roadway system comprises 350 miles of paved streets. Most of the business districts and older residential sections have roads that were designed and installed in the 1920s. Traffic-related problems have increased due to the physical constraints of the streets, a burgeoning multilingual immigrant population and the city’s location between three of the most frequently traveled freeways in Los Angeles County. 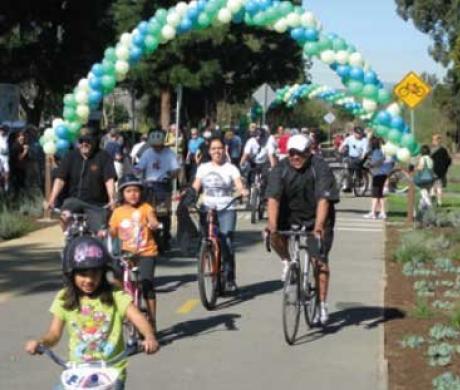 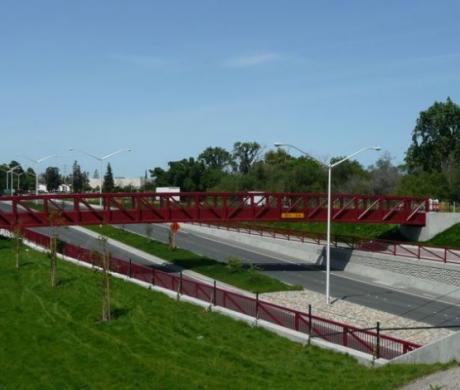 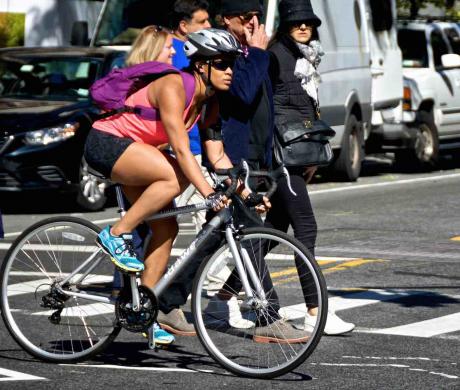 Toward an Active California: Best Practices for People-Oriented Cities

Cities are working to improve walking, bicycling and transit options. The “All Ages and Abilities” approach uses bikeways that are physically separated from highspeed and high-traffic roadways.